Posted in Horticulture on February 15 2017, by Kristine Paulus

Kristine Paulus is NYBG’s Plant Records Manager. She is responsible for the curation of The Lionel Goldfrank III Computerized Catalog of the Living Collections. She manages nomenclature standards and the plant labels for all exhibitions, gardens, and collections, while coordinating with staff, scientists, students, and the public on all garden-related plant information.

Swamps have an undeserved negative reputation, and it’s no help when the word is used as a derogatory metaphor. A swamp is a type of wetland, one of our most important ecosystems. Wetlands control flooding, filter pollutants, slow erosion, improve water quality, store carbon, and provide necessary habitat for a wide range of plants and wildlife.

Found on all continents except Antarctica, swamps are a type of wetland which is dominated by trees and shrubs. Trees that grow here have adapted to growing in very wet soil. Woody vegetation growing in the swamp area of the Wetland Trail includes willow, maple, buttonbush, dawn-redwood, bald-cypress, alder, oak, dogwood, and more.

Strolling along the Wetland Trail, visitors are likely to encounter Acer rubrum, commonly called red maple because of its color—red leaf stalks, red flowers in early spring, and some of the best fiery red fall foliage. It is also sometimes called swamp maple for its preference for wet soil conditions.

Trail in the Mitsubishi Wild Wetlands 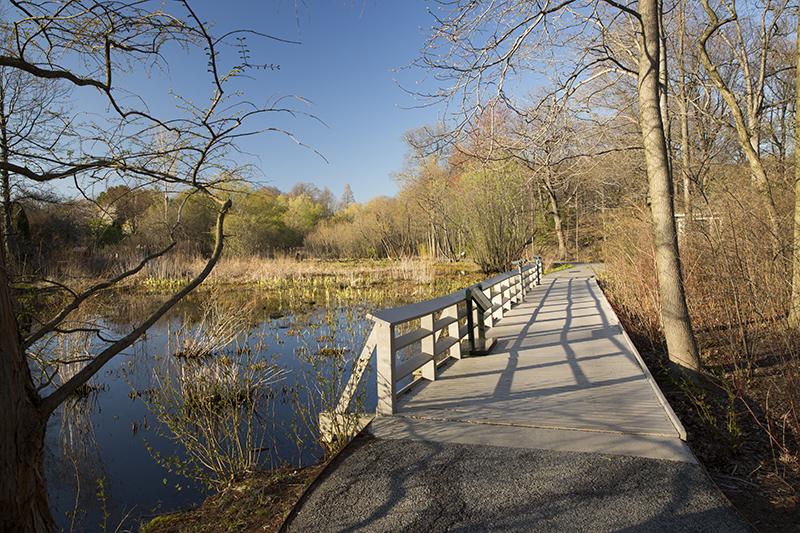 The swamp-loving shrub Cephalanthus occidentalis, or common buttonbush, is easily recognized on the trail by its large spherical flower heads that resemble pincushions and are often teeming with bees. These ornamental flowers are followed by button-like balls of fruit whose seeds provide an important source of food for wildlife.

A variety of willow species (Salix spp.) dot the Wetland Trail as well. In addition to their graceful and interesting habit that has been celebrated for centuries in mythopoetic literature and folklore, willows are sources of salicylic acid, better known in the form of Aspirin. Their flowers, called catkins, open in early spring and are some of the first of the season to provide nectar and pollen for bees.

Deeply fluted trunks of Metasequoia glyptostroboides (dawn-redwood) and its close relative, Taxodium distichum (bald-cypress or swamp-cypress), provide architectural bookends on the north and south ends of the Wetland Trail. Typically found growing in moist sites, both are deciduous conifers, losing their needle-like leaves in autumn. Once thought to be extinct, the endangered dawn-redwood was discovered in China in the 1940s and seeds were distributed to NYBG. These living fossil trees are part of our collections today. Bald-cypress can be differentiated by their woody ‘knees’, part of their root system, seen sticking out of the water or ground around them. These tall trees are prized by nesting birds such as eagles.

With their highly organic and nutrient-rich soil, wetlands such as swamps support an astounding biodiversity. Biologists estimate that a third to half of the country’s threatened or endangered species live in wetlands. Nearly 7,000 plant species live in and rely on wetlands in the United States alone.

In recent years wetlands have experienced a devastating loss of habitat. Because swamplands are often mistakenly considered unproductive wastelands, they are drained for other uses. This is most obvious in America’s most famous swamp, the Everglades, which is half the size it was a hundred years ago. This is unfortunate because swamps have the power to mitigate the effects of climate change with their above average ability to store carbon, a greenhouse gas. The drainage and deforestation of swamps is detrimental to the environment. For the future of the planet, we need to preserve the important habitat of wetlands like the Wetland Trail. They are one of our most valuable natural resources.

To learn more about the trees and other plants growing in the swamp and other wetland areas of the Mitsubishi Wild Wetland Trail, visitors can explore Garden Navigator, the catalog of the Garden’s living collections.

Dear Kristine:
Congratulations. You should continue fighting to preserve swamplands and wetslands in your country.