Starting April 29, the iconic dome of the 117-year-old, glass-and-steel Enid A. Haupt Conservatory will undergo restoration in accordance with routine maintenance and operations of the Garden’s facilities. The great Conservatory, the centerpiece and symbol of NYBG, is the preeminent existing American example of the crystal palace glass-and-steel school of design developed in England and Ireland in the mid-19th century. It is the most important glasshouse in the country and one of the most beautiful in the world. Shortly after the Garden’s founding by eminent botanist Nathaniel Lord Britton and his wife, bryologist Elizabeth Knight Britton, the Board of Trustees authorized the building of the Conservatory, which has required constant maintenance and repair due to the tenuous balance of glass, wood, and metals subject to the heat and moisture required by indoor plants and the constantly changing external weather conditions of New York.

Constructed by Lord & Burnham Company and completed in 1902, the Enid A. Haupt Conservatory, an acre under glass, is considered one of the most superb glasshouses of its time. It was designated a New York City Landmark in 1973 and has been listed on the National Register of Historic Places since 1967. The entire facility underwent restoration completed in 1997 under the direction of Beyer Blinder Belle, which included full reconstruction of the exterior, replacement of 17,000 panes of glass, re-creation of key architectural ornaments, upgrading of utility systems, and the installation of computer-controlled misting and environmental control systems. 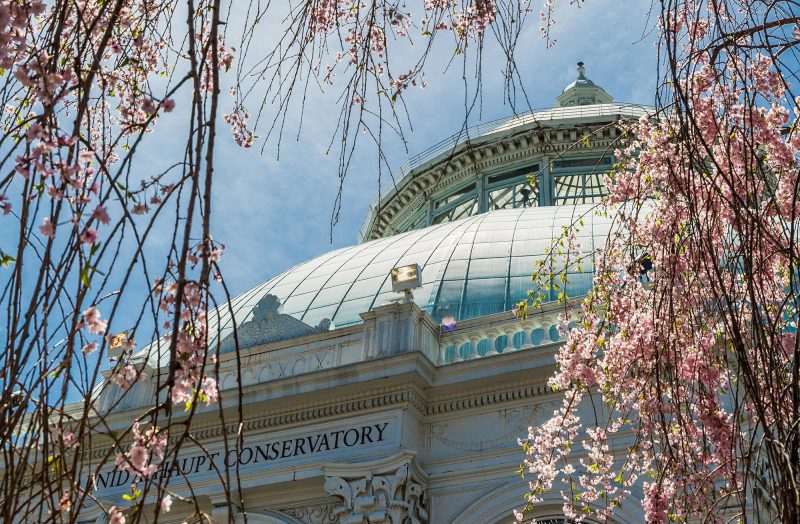 This current restoration, led by Jan Hird Pokorny Associates (JHPA) and Silman Structural Engineers, and made possible by the generous support of the LuEsther T. Mertz Charitable Trust, City of New York, and State of New York, focuses on the central dome atop the Palms of the World Gallery. It comprises the cupola, upper dome, drum (or compression ring), and lower dome. Interior scaffolding and a temporary horizontal work surface erected below the dome drum and an enclosed cylinder around the exterior of the drum and portions of the lower and upper domes will enable the work to take place efficiently while safeguarding the specimens. The work surface will act as a weather-proof barrier ensuring the Gallery below remains protected and properly climatized.

Because of the humid conditions maintained inside and the range of New York City weather through the seasons, the protective structure is designed to maintain the required interior environmental conditions while allowing the contractor to make necessary repairs. Conservatory restoration projects occur approximately every 20 years. Using leading-edge materials and technologies, the restoration will help make the building more energy efficient while respecting its landmark status. 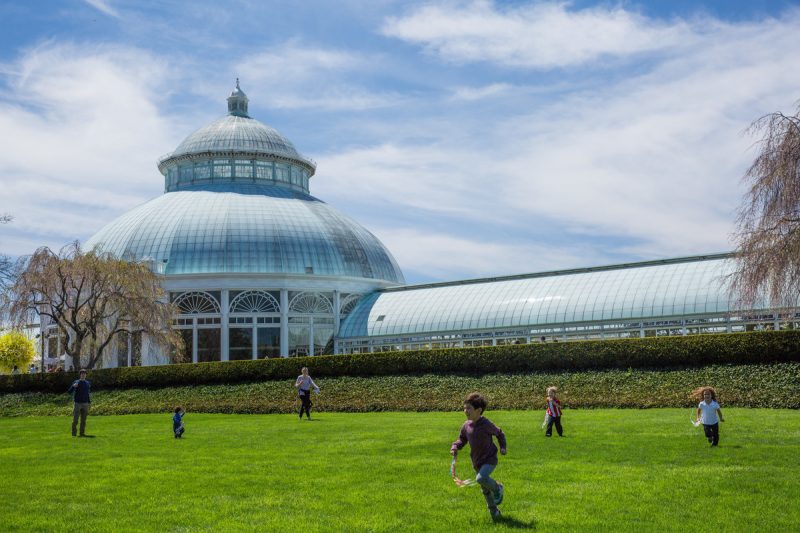 Dome infrastructure will also be upgraded, including the mechanical operation of the dome windows, misting system, heating, and lighting. The painted wood cladding around the drum and the wood cornice will be replaced with aluminum requiring less maintenance. Gutters and snow guards will be also be upgraded. The plan also addresses facility upgrades to the Conservatory’s heating systems and public restrooms, applying high-performance coatings on the interior steel and exteriors, including the façade and entablature, improved exhibition and path lighting, and repair of bluestone pavers in the Courtyards.

The majority of the 55,000-square-foot Haupt Conservatory surrounding two Courtyards will remain open during the work, except between May 13 and June 1, 2019, when four galleries will be open. The Palms of the World Gallery as well as two adjacent galleries—one used for special exhibitions and one featuring a lowland rain forest display—will be closed from April 29, 2019 through May 31, 2020. The Holiday Train Show® (November 23, 2019–January 20, 2020) will be mounted in a specially designed temporary exhibition structure that will be erected adjacent to the Conservatory, along Perennial Garden Way.