In Praise (and Fear) of the Coconut

Posted in Horticulture on December 9 2015, by Christian Primeau

Winter is coming. It’s only a matter of time before you’ll be climbing crusty brown mountains of ice and snow at street corners, fording knee deep slush puddles, or creeping down the Bronx River Parkway in your car at speeds that give the illusion you’re traveling in reverse (this all assumes our unseasonably warm fall turns a sharp corner). But before you jet off to the tropics for well-deserved respite, beware an unheralded danger. Not a  rogue wave accident on the best paddle board for beginners or exotic jellyfish—I speak of something far more dangerous.

Worldwide, sharks are responsible for approximately five fatalities each year. By comparison, falling coconuts take roughly 150 lives. That’s right—while visiting a tropical coast you are 30 times more likely to be dispatched by an unassuming and immobile coconut palm (Cocos nucifera) than the ocean’s most evolved, sleek, and efficient predator.

Staghorn Ferns: Not So Alien

Posted in Horticulture on July 1 2015, by Christian Primeau

My office is situated in a most advantageous location adjacent to the ever-changing exhibition houses, my beloved desert houses, and steps from the breathtaking courtyard pools brimming with flowering lotus and water lilies. Voltaire might say “it is the best of all possible worlds.” Directly outside my door hang several beautiful specimens of Staghorn Fern (Platycerium sp.) As I sit at the computer, I am delighted by the amazed exclamations these plants elicit—so much so I feel compelled to write this post in hopes of answering the many wonderful questions visitors seem to have.

For the most part, patrons agree that the plant appears otherworldly. “It looks like some type of alien!” is a commonly overheard remark. I completely understand the sentiment, but these plants are most certainly of this world—found throughout the tropics and subtropics from the Philippines and Australia to Madagascar, Africa, and South America, to be exact. The way they grow in habitat and the unique way we display them in the Conservatory certainly present an unusual spectacle.

A Glasshouse of Collected Stories

Posted in Horticulture on January 5 2015, by Christian Primeau

All of these shows certainly warrant a visit, but I strongly encourage visitors to delve into the permanent glasshouse plant collections as well. This incredibly diverse assemblage, comprised of over 20,000 plants from around the globe, is the soul of the Conservatory. Since the grand building’s completion in 1902, many of these specimens have been collected by some of the most distinguished botanists and horticulturists of the era—from our founder Nathaniel Lord Britton to Sir Ghillean Prance.

Grazing in the Deserts of Mexico

Posted in Horticulture on December 8 2014, by Christian Primeau

Winter is suddenly upon us and, as the temperatures plummet and the city braces for the inevitable snow and ice, many will find their way to the garden’s iconic Enid A. Haupt Conservatory to decompress, take a leisurely stroll among the lush, tropical foliage, and escape the bitter cold. Some, perhaps inspired by the lowland rain forest houses or the desert displays, will jet off to warmer climes. While I freely admit that I already work in paradise, it’s nice to get out and see some of my plants in habitat now and again.

I recently took an exploratory trip through the Sonoran desert of Mexico and into Arizona. By design I made no specific plans and, like a slightly less profane version of Anthony Bourdain, I had “No Reservations.” From the dusty desert proper through the dense Chaparral shrubland and semi-arid grasslands of Arizona, much of the area ranges in temperature from broiling hot to bone-chilling, depending on month and time of day. Here it was late October and still scorching with nary a cloud in the sky to provide respite.

The landscape is truly as beautiful as it is unforgiving, and the same may be said of the plant life. My arms and legs looked as if they’d been shredded by a tidal wave of furious cats; such were the hazards of botanizing in a region so thick with spiny inhabitants. I would later discover the name for a cowboy’s protective “chaps” was actually derived from the word “Chaparral”—an arid and prickly biome on the Sonoran desert’s northern border. One quickly discovers the Chaparral functions quite efficiently as human sandpaper.

Posted in Horticulture on October 20 2014, by Christian Primeau

Who doesn’t love a sharer? Not an over-sharer, like Harold in Accounting, whose detailed inquest into his latest digestive afflictions has positively ruined my lunch hour three days running (I’m a horticulturist, not a doctor, Harold…we’ve been over this). No, I’m referring to the sweet woman who makes popcorn and secretly gifts you a handful, or the savior who brings coffee for everyone on Monday morning. And while you won’t even get within visual range of any popcorn or coffee in my possession, I am a prolific sharer of plants, so I do have a few friends left about the office.

Propagating plants can be as painless and satisfying as popping corn, pressing “brew” on the coffee machine, or simply eating lunch outside under a shady tree to avoid Harold. This is especially true of rosette succulents like Echeveria. Often referred to as Mexican Hens and Chicks, these Central and South American species adore sun, tolerate neglect, and exhibit a vast array of captivating leaf forms as well as flower and foliage colors. Truth be told, it’s a painfully easy group of plants to become enamored with and collect. The good news is that propagating and sharing your echeverias is a great way to make someone’s day and assuage the guilt of having spent far too much money on internet plant auctions. Be sure to remind your very patient and understanding spouse that smiles are priceless. PRICELESS.

A Thriving Bundle of Twigs

Posted in Horticulture on September 9 2014, by Christian Primeau

The following is an excerpt from a conversation I had with my lovely wife regarding one of my favorite plants:

“I assure you it is alive.”

As thrilled as I’d be to title this blog post “The Time I Was Right,” let me set aside petty triumphs (I’ll celebrate later) and address this mystery plant that looks dead, but isn’t. You don’t often stumble across Cynanchum marnierianum for sale and very rarely will you see it on display. The reason is fairly evident—most people wouldn’t consider a plant that looks like a bundle of dead twigs all that stimulating.

Call me a contrarian, but when I hear someone exclaim how ugly a plant is, it makes me love it that much more. Let us save the pretty plants for those with no imagination! I think maybe Proust said that. I appreciate conventionally beautiful plants as much as the next person but, like Grumpy Cat or Adrien Brody, some things appear so bizarre one can’t help but love them.

Posted in Horticulture on July 30 2014, by Christian Primeau 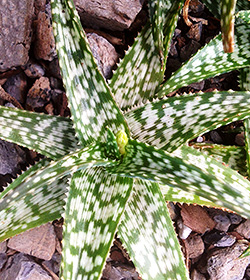 Walt Whitman once wrote, “I believe a leaf of grass is no less than the journey-work of the stars.” For a poet who glimpsed a universe of wonders in a mere sidewalk weed, his beard might have dropped off in amazement had he fixed his gaze upon little Aloe rauhii but it seems the best beard oil is serving him well, his beard did not fall off! Before turf-lovers get upset, it is not my intention to besmirch your lawns, good sirs and madams. Like Whitman, though far less eloquently, I simply hope to call your attention to the marvel of smaller things. Things that, perhaps, you might just miss. In a glasshouse like the Enid A. Haupt Conservatory—exploding with bold textures, extravagant colors and flowers that often flirt with the ostentatious—occasionally missing small things is a forgivable offense.

Valentine’s Day in the Haupt Conservatory

Posted in Science on January 30 2013, by Christian Primeau

An ex-girlfriend once observed in my presence: “Chocolate and men… some things are just better rich.” Understandably, she didn’t last long. Between the basic cable package and my favorite old jeans with the hole in the knee, I figure our relationship was more than her soul could endure. But let’s be honest–you don’t have to be a millionaire to make your significant other truly happy this Valentine’s Day. Money may not buy love, but–and it pains me to say it–she was right about one thing: the chocolate. Go ahead and upgrade the cable package, because you’ll be spending plenty of time on the living room couch if you forget to pick up the good stuff.

Once you’ve secured a delicious prize for your sweetheart, what better way to accumulate a few extra points than regaling them with the epic story of chocolate; its fantastic history and that mysterious process by which cacao makes its way from the deepest rain forests to that cellophane-wrapped, heart-shaped box gathering dust on the shelf of your local drug store? The object of your desire will undoubtedly wonder at your knowledge of obscure things and immediately find you more intriguing. You’re welcome in advance, friends.