Posted in Horticulture on February 3 2015, by Sonia Uyterhoeven

I wasn’t looking for blue. I was looking for black…the darkest shade I could find. But I found Indigo™ ‘Blue Berries’ in the pages of Territorial Seed catalog and fell in love. For clarity, Indigo™ ‘Blue Berries’ is Solanum lycopersicum—not Vaccinium corymbosum. If you’re not yet savvy with the nomenclature, that means we’re talking about tomatoes rather than blueberries.

The old English rhyme above was instruction for a bride on what to wear at her wedding. The list was full of superstitions and fertility prayers. That said, I am hoping that Indigo™ ‘Blue Berries’ will be not only fertile, but positively prolific. Let me start from the beginning.

Posted in Horticulture on January 29 2015, by Sonia Uyterhoeven

Last week we discussed some houseplant basics—covering light and water. This week we will look at a few more important factors for successfully growing indoor plants.

Your house is full of microclimates. Locations near windows may be sunny during the winter, but they are also cool (usually 10 degrees colder than the center of the room). In the summer, a south-facing window can get too hot for plants. Your alternatives are to open the window to let the air circulate or invest in a sheer curtain to block the intense rays of the summer sun. Investigate your home’s microclimates in order to place your plants in the best spots.

Some plants such as Clivia miniata and Dendrobium nobile need specific care in order to flower properly. They need a resting period in the fall which lasts for approximately 3 months. During this time fertilizing is stopped, watering is reduced and they are placed in a cool (45 to 65 degrees Fahrenheit) location in full sun.

If the orchid—the dendrobium—doesn’t receive this temperature drop, it will often produce baby plants (Keikis) instead of flowering. The bush or Kaffir lily protests by not extending the flower stem upwards and the blooms hide in its foliage. You will also notice that your jade plant (Crassula) also flowers best when it realizes that the seasons are changing.

Posted in Gardening Tips on January 20 2015, by Sonia Uyterhoeven

The weather has grown cold and we’re well into the season of staying indoors. During this time of year, I often look around my apartment at the few forlorn houseplants (I have horrible light) and wish that I could do more to “green up” my living space.

For the next two weeks, I will cover houseplant basics. As part of my preparation, I sat down with Mobee Weinstein, a Foreman at the Garden who has been working here for over 30 years. Mobee is an avid houseplant gardener. We discussed some of her favorite houseplants and the ones that she grows in her own home.

Houseplants are easy to grow as long as you are grounded in a basic understanding of three important factors: (1) the plants needs, (2) your particular home environment, and (3) your abilities as the guardian of these living creatures. Today we will cover the basics of what you need to know before you get started, focusing primarily on light and water.

Posted in Horticulture on January 14 2015, by Sonia Uyterhoeven

Caladiums—or angel wings (Caladium)—are native to South America, where they grow in the partially shaded understory of tropical trees. In their natural habitat, they have plenty of moisture, good drainage and dappled light. In New York City these exotic foliage plants adorn fancy street tree pits and tiny borders on the sides of apartment buildings during the long summer months.

At the Garden, we tuck them into lightly shaded borders or dress them up in containers. We have grown them successfully in full sun in containers but had to keep a watchful eye on them to make sure that they were well-watered throughout the season.

Caladiums have paper-thin leaves in a glorious array of colors and patterns. They come primarily in speckled whites and varying shades of pinks to rosy reds. The mottling, streaking, and speckling is fantastic and varies depending on the cultivar. They are iridescent in the shade and will brighten any dark corner of the garden.

Posted in Horticulture on January 6 2015, by Sonia Uyterhoeven

For the plantaholic, the New Year brings new vices. Fortunately, most of them are harmless and the conundrum gardeners are most often faced with is finding a good home for this year’s novelties in an already crowded garden.

One person who is always ready to play to our weakness is nurseryman Dan Heims of Terra Nova Nurseries. Terra Nova is a wholesale nursery situated just 25 miles south of Portland, Oregon; for sourcing plants from them in your area, this page will direct you to a store near you.

When it comes to color, curiosity and the “wow” factor, Heims’s breeding program has developed a formula for success. This year, leading the charge for “something completely new” is Mukgenia Nova™ ‘Flame’. It may sound like you are knee deep in sludge, but Mukgenia is actually the first ever intergeneric hybrid between a Bergenia (pigsqueak) and Mukdenia ‘Crimson Fans’.

Mukdenia (the parent) is essentially a coral bell (Heuchera) with palmate leaves. Their foliage colors beautifully as the season progresses. The green palmate leaves become tinged with a brilliant red. The only problem, here in our New York climate, is that the foliage senesces rapidly in late summer; particularly when it has been a hot summer.

Posted in Horticulture on December 30 2014, by Sonia Uyterhoeven

I am not sure how we managed to get to the end of this year so quickly—perhaps I never am—but like all the others, this year seemed to gallop as it approached the finish line. I generally like to finish off my year of blogging with environmental topics, so that we can reflect on our role and renew our commitment to preserving the natural world in small yet significant ways.

This year, these larger-than-life contemplations will have to wait until after the New Year. My topic today is light, airy, and fragrant. Everyone seems to be growing paperwhites (Narcissus papyraceus) and amaryllis (Hippeastrum sp.) this year. I will describe how easy it is to grow these two winter wonders and inspire you to try—if you haven’t already.

Based on the classification given by the American Daffodil Society, paperwhites come from Division 8—Tazetta Daffodils. The members of this division are incredibly floriferous with some producing up to 20 blossoms per stem (range 5–20). They prefer warmer conditions than many of their bulbous brethren. While some members of this division are hardy to zone 5, the paperwhites that you force in the winter months are only hardy from zones 8–10.

Holiday Tips for Getting Out of Sticky Situations

Posted in Horticulture on December 23 2014, by Sonia Uyterhoeven 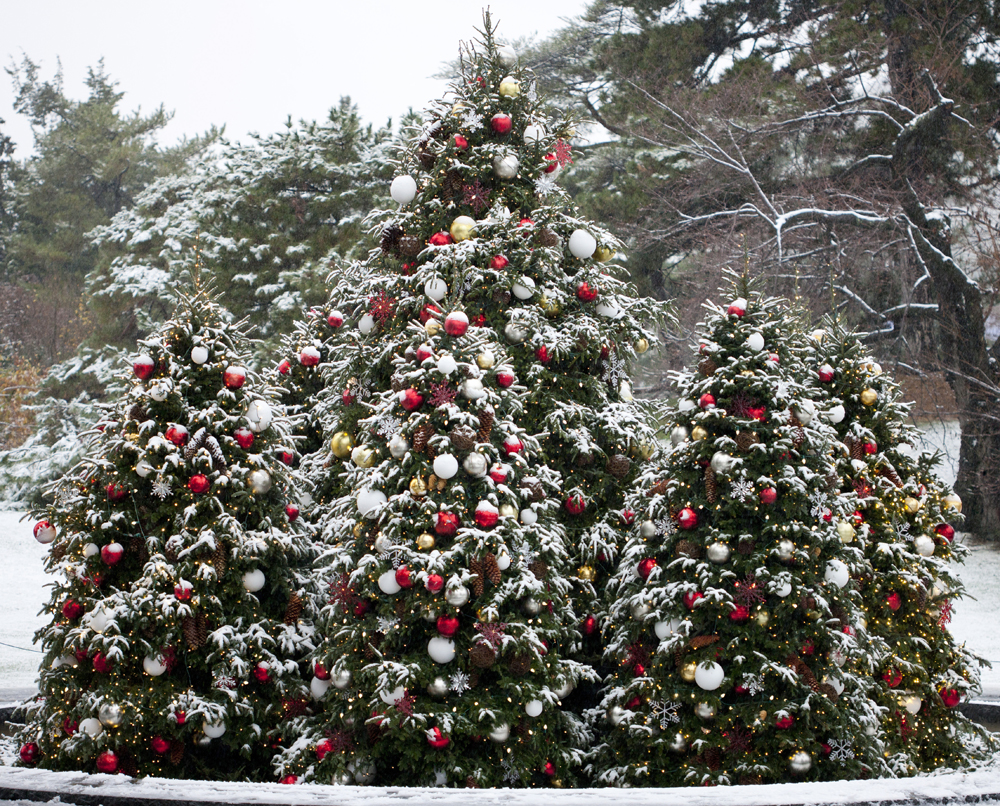 With the holidays upon us, I figured I should share some tips for getting out of sticky situations. No, I don’t mean finding the words you need to mask your disappointment when you unwrap yet another holiday-themed tie, or filling those pregnant silences that come after receiving a gift that’s just a little too practical.

The sticky mess I refer to is sap. Just looking at a conifer is enough to make my hands feel sticky. The holidays are a perfect time for buying or making your own holiday wreaths or evergreen table decorations, and I usually journey down to the floral district on 28th street—between 6th and 7th—to pick up my supplies. But the tree vendors that set up on street corners seem to have an ever-expanding selection of greens.

Posted in Horticulture on December 16 2014, by Sonia Uyterhoeven

While most of the Garden is being put to bed, our Seasonal Walk—designed by Piet Oudolf—is still putting on a notable display as the winter approaches. This is thanks to Oudolf’s naturalistic design which incorporates many plants that senesce well and provide interest even after they’ve passed their seasonal prime.

A week or two ago I was working on the Seasonal Walk, tidying up the border with my colleague, Katie Bronson, and we were admiring some of the sturdier perennials that still looked good even into December. One of the most striking features of the Walk at the onset of the hibernal months is the tall purple moor grass (Molinia caerulea ssp. arundinacea ‘Transparent’). This grass played an important role earlier in the season as it shot up to nearly six feet, towering over many of its neighboring perennial brethren. ‘Transparent’ has airy flowers with an open habit and long-lasting seedheads.

The stems of ‘Transparent’ turn into a vision of glowing embers late in the season, when they take on golden, orange, and raspberry hues. Those of you with a watchful eye may have noticed as you strolled down the border that some of the stems on certain grasses were upright, sturdy, and colorful, while other, similar grasses looked somewhat worse for wear and had only golden yellow stems. Katie told me that along with ‘Transparent’, some tall more grass (Molinia arundinacea ‘Skyracer’) had been planted. Presumably these plants will be removed in the spring and replaced with more ‘Transparent’. It was difficult to distinguish the two during the growing season, but their disparities became apparent in the fall.

Tree Tips for the Holidays

Posted in Horticulture on December 9 2014, by Sonia Uyterhoeven

As the holiday season descends on us, it’s time for gardeners to spruce up their home in preparation for the seasonal festivities. I love the smell of pine in my home and I always try to create an evergreen holiday centerpiece for my table. The addition of a Balsam fir adds a lovely fragrance to my living room.

As a New Yorker, I am bombarded by Christmas tree vendors when I walk down the streets around this time of year. Having moved several times in my 10-year tenure in the city, I’ve discovered that Christmas trees are like Rainer cherries. Their price changes as you walk from east to west, and they drop the further north you walk. I have vivid memories of living on the east side and walking from 2nd Avenue to Madison during cherry season, watching the price rise from $4.99 a pound to $13.99—all within a four-block radius.

Now a Westsider, I buy my trees anywhere from West 106th to West 118th. Last year, I bought an eight-footer for a wonderful price. The tree took a ride on the M10 thanks to a generous driver who understood that my eyes were bigger than my arms. This year I am torn between the good prices I see at my local Whole Foods and the deals that I see on West 106th. It all depends on how far I want to lug the tree.

Posted in Horticulture on December 3 2014, by Sonia Uyterhoeven 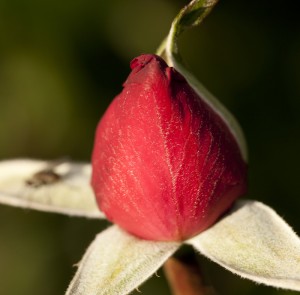 With Thanksgiving and the season’s first snow behind us, the reality of winter is now upon us. At this time of year the rose garden is closed to the public, but the gardeners are still busy working. Fall clean-up is important!

As every rose gardener knows, the queen of flowers is particularly susceptible to black spot. The spores of the fungus will happily over-winter in the soil around your roses. It is paramount to clean up all the diseased foliage and be meticulous about keeping the area around the rose clean.

Once our roses start to go dormant for the winter and the ground starts to cool, we surround the base of the plants with mulch. The mulch acts like a winter Parka, protecting the base of the rose during the cold winter months. We use a finely shredded bark mulch that doesn’t get matted down into large clumps. “Hilling” or mounding mulch around the base of our roses to a depth of 6 to 8 inches provides ample protection during the cold winter months.