Posted in Garden News on December 27, 2019 by John McEnrue

John McEnrue is the Vice President for Site Operations and Chief Sustainability Officer at The New York Botanical Garden. 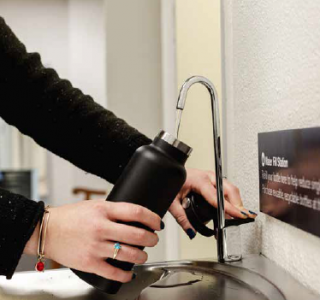 Earlier this summer NYBG received the American Public Gardens Association’s Operational Sustainability Award in Washington, D.C., recognizing The New York Botanical Garden as having the premier commitment to sustainable operation relative to its peers throughout the nation.

Across the grounds, NYBG continues to make strides in waste reduction. The most significant was eliminating single-use plastic beverage containers system-wide this summer in both public and staff locations. We were able to do this by either enhancing existing water fountains to include personal bottle filling adapters, installing new bottle filling stations, or replacing the commonly used five-gallon inverted water filling stations with filtered stations that tap into New York City’s internationally renowned clean water supply. Our food vendor, in concert, agreed to no longer sell single use plastic bottled water and, in turn, replaced it with metal refillable water containers.

One Thousand Plants, One Billion Years of Evolution

Posted in Garden News on December 12, 2019 by Samantha Frangos

Samantha Frangos is a Laboratory Technician at the Pfizer Plant Research Laboratory of The New York Botanical Garden.

The green plant tree of life is built upon many evolutionary innovations. Plants have come a long way since they began as single-celled organisms one billion years ago. They have transitioned from water to land and managed to become the beautiful, towering, flowering and fruiting beings that are the backbone of life on earth. They have complex life histories—creating vascular systems, waxy cuticles, spores, seeds, and flowers. These innovations define key turning points in the history of green plants, and they are what separate the major plant groups: green algae, mosses and liverworts, ferns, gymnosperms, and flowering plants.

The One Thousand Plant Transcriptomes Initiative, also known as the 1KP initiative, is a global collaboration of nearly 200 plant scientists, including Dennis Wm. Stevenson, Ph.D., NYBG Vice President for Science and Cullman Senior Curator. “This longterm project integrates fieldwork, herbarium research, and living collections with the latest in laboratory and information sciences as an international collaboration,” Dr. Stevenson said. For almost 10 years, this group has been attempting to sequence the genes of one thousand plants, spanning every plant family on the tree of life. The sequencing of these species, 1,124 in total, brings science significantly closer to understanding how the tree of life works in the plant kingdom. By examining the similarities and differences in genes, we can more fully understand how plants created evolutionarily significant transitions. For example: we can use this data to understand how conifers, which disperse their seeds in cones, are related to flowering plants, which disperse their seeds in fruit and only appeared in the fossil record about 200 million years ago.

Posted in Garden News on December 5, 2019 by Garrett Barziloski

Posted in Garden News on November 29, 2019 by Jessica Arcate Schuler

Jessica Arcate Schuler is the Director of the Thain Family Forest at The New York Botanical Garden. 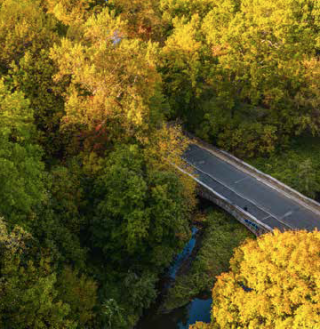 Ecological restoration is the driving discipline for the ongoing work in the Thain Family Forest. This newer field of science is defined by the Society for Ecological Restoration (SER) as the process of assisting the recovery of an ecosystem that has been degraded, damaged, or destroyed. Ecosystems around the world are being used unsustainably and in some cases completely destroyed. Because of this, they are no longer providing vital ecosystem services such as food, water, carbon sequestration, pollination, climate regulation, and wildlife habitat. Ecological restoration provides the platform for people to utilize both conservation and sustainable development techniques to restore ecological function and improve conditions for everyone. The SER has developed international standards that guide restoration projects across the globe with an emphasis on educating and engaging local communities. Through the Forest Program, NYBG is a member of SER and also the Ecological Restoration Alliance of Botanic Gardens where our collaborative declaration is to “Connect. Share. Restore.”

Posted in Garden News on November 20, 2019 by Barbara Thiers

Barbara M. Thiers, Ph.D., is the Vice President and Patricia K. Holmgren Director of the William and Lynda Steere Herbarium, and Curator of Bryophytes at The New York Botanical Garden.

Herbarium specimens are one of the very few tangible sources of information about how plants and fungi lived before industrialization, and during each successive period of technological advance since then. Through creative adaptation of technologies developed to address other questions, researchers today can glean information from herbarium specimens about an organism’s physiology, its reproduction, interaction with pollinators, predators and parasites, and the atmosphere around it, for example, the presence of pollutants in the soil and the chemical composition of the air.

Plants have small openings on the undersides of their leaves called stomates that allow Carbon Dioxide (CO2) to enter the leaf for the process of photosynthesis, and allow Oxygen (O2), a byproduct of photosynthesis, to enter to air. A variety of studies have demonstrated that leaves produce fewer of these stomates when CO2 concentrations in the air rise. Examination of stomates on herbarium specimens confirm other evidence that CO2 levels are rising, and help to correlate this rise with other types of climatic and human-mediated events. Assays of plant tissue from herbarium specimens can also help find previously unidentified sources of pollution. Herbarium specimens have been used to track historical levels of radiation and heavy metals to serve as a baseline for pre-pollution conditions, and to assess the reaction of a species to the presence of these compounds. These techniques were used to study long-term effects of known pollutions events, such as the Chernobyl nuclear disaster, or can be used to discover previously unknown contamination events.