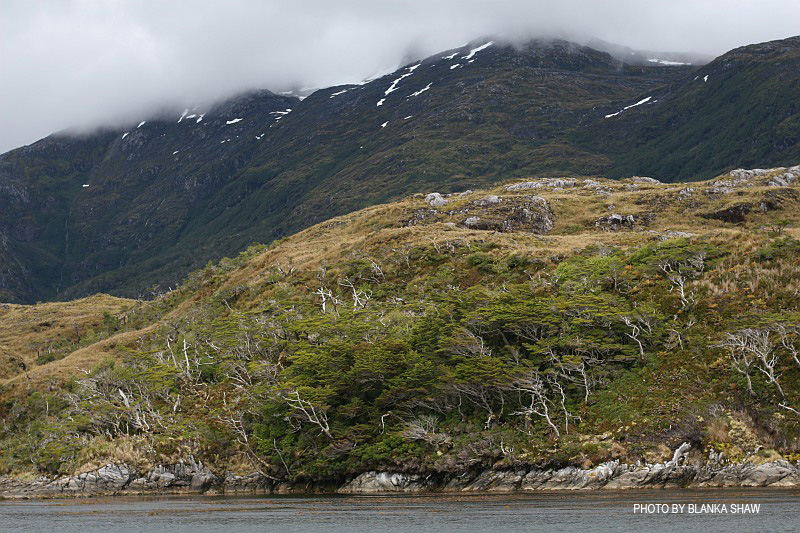 Yes, we’re in the same place as yesterday. The captain of our ship said that last night, winds of 80 knots (88 mph) were expected, and so he did not want to take the ship out into open water. 88 mph!! That’s hurricane force winds, and indeed during the night the winds howled and the ship was buffeted about.

I got up in the night and went out onto the deck at 3:45 a.m. The deck was illuminated with moonlight, many stars were visible, and the snow glowed on nearby mountains; however, the wind was strong and I held onto the railing to make sure I wouldn’t be blown overboard. Moments like this, alone in the glory of nature, are the moments I treasure above almost everything else. When I came out again at 6:15 a.m., the sun had risen, the winds had died down and the sky was mostly clear. If nothing else, the weather here can change quickly.

By the time we were ready to go into the field, it had started to rain again, but this time only lightly, and the winds, and thus the sea, remained calm. We headed toward what we initially thought was a lake but instead turned out to be a shallow inlet of the sea, accessible by zodiac. We split up and Jim headed toward a large, glacier-fed waterfall because of his special interest in rheophytic bryophytes, those that grow on rocks in moving water. Some rheophytes are only in the water seasonally, following rain patterns, and others are permanently wet. Juan headed up the mountain, toward the snow, because the moss genus he is working on for his dissertation often grows on exposed rocks. Blanka collected along the shore of the small inlet, and I headed for the rocky peaks near the shore and the pockets of forest in more sheltered sites.

Our goal, which seems overwhelming given the immensity of the landscape and the small fraction of it which we are able to collect from, is to document the diversity of mosses and liverworts in the Chilean Antarctic Province (Provincia Antártica Chilena). It’s because of this goal that we spread out in the field and try to sample as many microhabitats as possible. 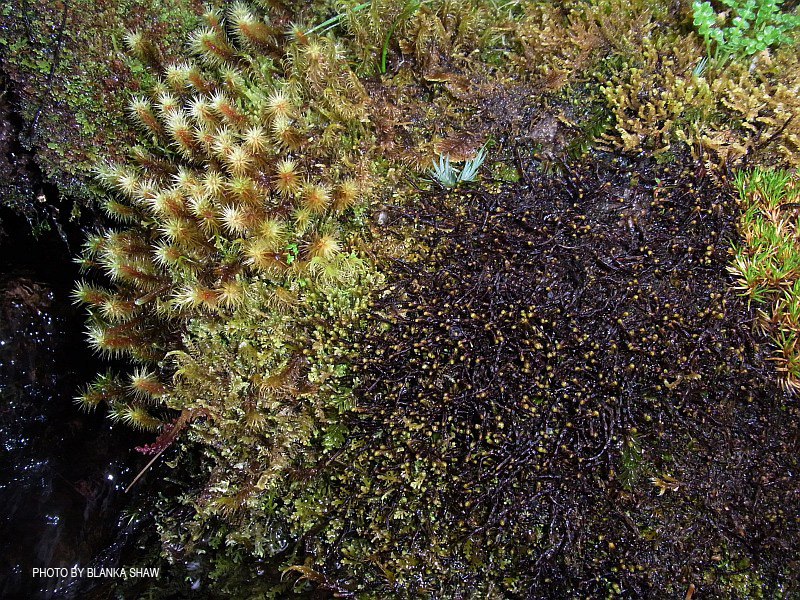 As the day progressed, the weather worsened. What had been light, intermittent rain became steady light rain, and as the time approached for us to be picked up, the rain increased in intensity until it almost seemed like sleet, it was so cold. The collections, which are put into paper bags, were saturated with water, even after I wrung them out with my hands. The wind was beginning to intensify, and as I waited for the zodiac to pick me up, I began to wish I was wearing  another layer of clothing (in addition to the five layers I already had on!). When we arrived back at the ship we looked like drowned rats, cold and wet. We hurried into the galley, which is constantly warm from the stove, to disrobe. The wet rain gear was carried to the engine room, which now looks like a Chinese laundry with all our wet clothes draped over the pipes.

After a hot lunch (I’ll have to talk about our food another day) we processed our specimens from the morning. All were sopping wet, and by now the paper bags were disintegrating. We have dryers for our mosses, but the heat source consists solely of 100 watt light bulbs. To expedite the drying process it is best to remove as much water beforehand as possible, so every specimen is wrung-out by hand and then placed into a new, dry paper bag. After all our specimens were processed and put on the dryers, we intended to go back into the field for the afternoon and early evening. However, around that time, the wind picked up again–it howled and white caps covered the water. We were told it was too dangerous to take the zodiacs out. We are trapped on the ship (which gives me time to write this). After two days like this, we’re just hoping it won’t become a pattern and thus limit our collecting to the mornings.

This is very exciting – the pics are fabulous – keep them coming!