Azaleas A to Z: Know Them to Grow Them

Posted in Gardening Tips on May 3 2011, by Sonia Uyterhoeven 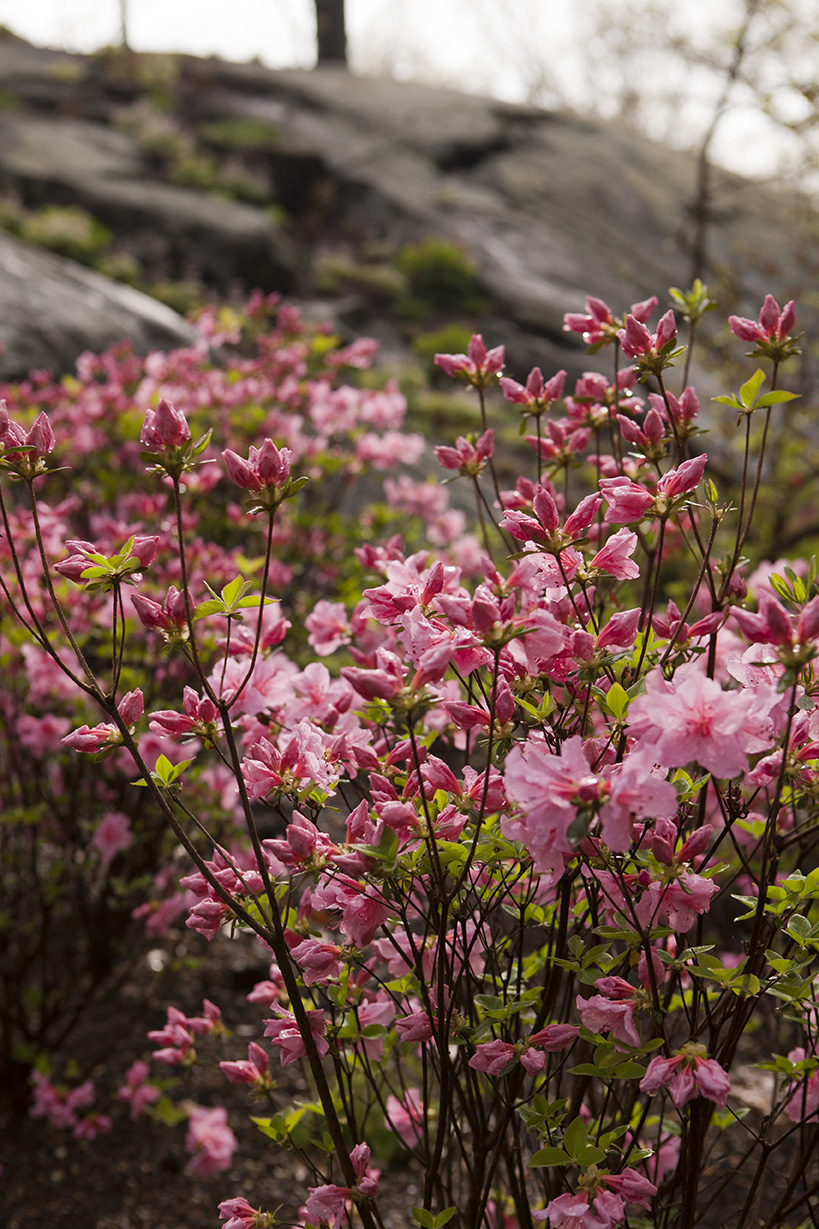 Azaleas are wonderful additions to the garden. They are easy to grow, look sensational, and have attractive foliage. Evergreen azaleas provide year-round interest while deciduous azaleas often have exquisite fall color and exhibit an elegant woody framework in winter.

In their native habitats, azaleas are often found growing in or on the edge of woodlands in well-drained, acidic soil that is rich in organic matter. They have a shallow, fibrous root system, which needs to be considered when caring for them. Azaleas do well in full sun or part shade (about four hours of sun). Planted in full sun, azaleas will be more compact and floriferous. When planted in part shade, they will stretch toward the sunlight and form a more graceful habit; flowers will not be as plentiful but will last longer.

When using azaleas for foundation plantings, locate them 3 – 4 feet from the building so that the roof will not obstruct rainfall and so that air can circulate around the plants. Avoid planting near highly reflective walls unless on the north side of the building or in the shade. Windy sites are problematic: in winter, winds and sun can desiccate the foliage, of evergreen azaleas especially. Deciduous azaleas are more forgiving.

Azaleas need good soil structure and plenty of organic matter so that their shallow roots will not dry out. Conversely, azaleas can be suffocated by excess water and poor drainage; soil compaction around foundations and in yards is a frequent problem. When amending the soil, it is better to prepare the entire bed rather than just the planting hole to create a uniform condition so that the fibrous roots are encouraged to spread. As a general rule, the soil should contain 5 – 10% organic matter.

Azaleas and other Ericaceous plants prefer a soil pH of 4.5 – 6 (5.7 – 6 is optimal). Test the soil in the planting bed; if it is too alkaline (above 6), use pelletized sulfur to increase the acidity; coated sulfur releases over time so the change is gradual. Read the package instructions to determine the quantity of sulfur needed; apply half the amount in September and the other half in April. Test the soil again the following fall to see if the process needs to be repeated.

Azaleas are not heavy feeders: feeding on a two- to three-year cycle will probably be sufficient. Common lore used to recommend fertilizing in the spring, when the plant was pushing growth, but recent university research has changed this precept. It is now recommended that azaleas be fed in the fall or three times during the growing season for a gradual, consistent effect.

For fall feeding, fertilize once around the time that sugar maples begin to turn color, anywhere from late September to the end of October. At this point in the season the plant starts to shut down for winter. Instead of encouraging growth, the fertilizer will be taken up and stored as carbohydrates ready to give the plant energy in the spring.

If a continual feed is preferred, divide the overall quantity into thirds and fertilize your azalea once before flowering, again after flowering, and finally in the fall. Organic fertilizer such as Holly-tone® 4-3-4 and Plant Health Care® 3-4-4 for Azaleas and Rhododendrons are two good candidates.

At the Garden, biostimulates such as M-Roots® (humus extracts and mycorrhizal fungi) are often added at planting time and then fertilizer is started the following year.

For an established plant, scatter the fertilizer around its drip line (the area beneath the outer most branches) so that the root system reaches outward to get the fertilizer. As a shallow-rooted plant, an azalea will not respond well to fertilizer cultivated in around its base.

See also: Top Tips for Designing with Azaleas in the Home Garden 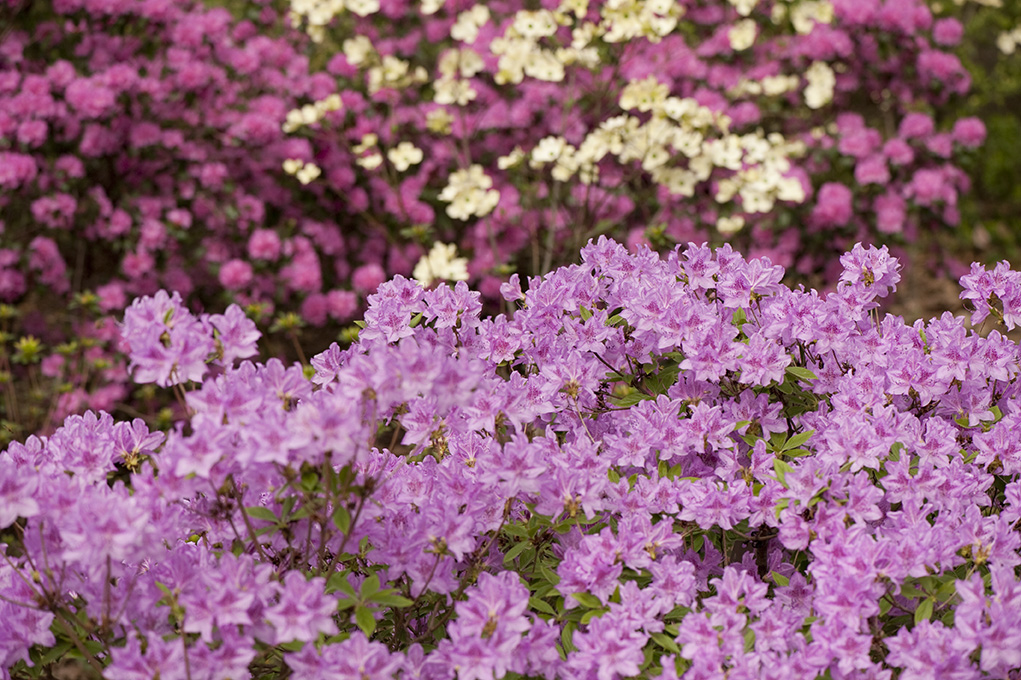 Azalea beds need to be mulched to keep the soil moist and cool. Mulch helps minimize the need for watering and helps keep the plant from drying out. Shredded leaves, fine-bark mixes, soil conditioners, Sweet Peet®, or pine needles are good choices.

It is generally recommended to apply two inches of mulch, but the finer the texture of the mulch material, the thinner the layer that needs to be applied. If the mulch is applied too thickly, like a solid mat, water will have difficulty seeping into the soil and it’s even possible that the azalea will start to root in the mulch. Do not mulch up to the base of the plant–the mulch should taper off as it approaches the base and not be in direct contact with the stems, which could otherwise create a dark, moist environment ideal for pests, disease, and rot.

Mulch will also help prevent weeds that can compete with the azaleas for moisture and nutrients. When weeding around azaleas, it is better to pick weeds by hand rather than with a tool so as not to damage the shallow root system.

It is important to keep an eye on your watering practices to maintain a healthy plant. Good cultural practices such as mulching and properly siting the azaleas help to maintain the health of the plants–and so does knowing when to water.

Immediately after planting, water the azaleas well. Pay attention to watering needs after the plants have flowered, when leaves and new flower buds are forming, and, of course, during the heat of the summer. Water well in fall, too, otherwise the plant will be prone to dehydration in winter. Plants should get approximately an inch of water (either rainfall or hand watering) per week or a half-gallon per square foot. The standard recommendation is to give small shrubs (less than 3 feet) 4 – 5 gallons per week and larger shrubs 7 – 10 gallons per week.