Posted in Around the Garden, Gardening Tips on February 3 2012, by Matt Newman 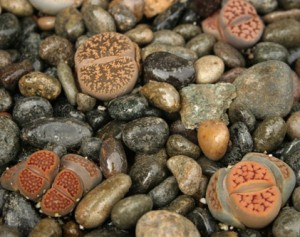 They’re inconspicuous almost to the point of invisibility, assuming you’re looking for them in their natural habitat. You might pass an entire stand of these plants without being the wiser were you to find yourself wandering parts of southern Africa. But when a grazing animal happens by, camouflage is the best natural defense in a landscape where food comes scarce and water borders on mythological.

Picking out lithops from the patches of pebbly ground where they grow is a simple task if you’re attentive–just look for misplaced symmetry. The thick leaves of the small, bifurcated plants resemble patterned stones, as evidenced in the breakdown of the name itself: lithos means “stone” and -ops means “face” in ancient Greek. But they’re not the subjects of any geology professor. You might guess that from their sometimes vibrant patterns and strange colorations.

The succulent leaf structure of lithops is a study in efficiency and rugged survivability. The breed grows predominantly in extremely arid environments–places across the African continent that manage only a few inches of rainfall a year, if any at all. Here, rationing quickly becomes the rule. And in each of the two leaves, separated like the lobes of a brain, there’s a miserly science of conservation going on. A few species survive year-round on nothing more than scarce traces of fog and morning dew.

Not that all lithops make their home in the African equivalent of the Badlands; different species can be found from rocky deserts to scrubland, and at sea level on into the mountains. The random distribution has led to a preference for dryer landscapes with specific “schedules” set by the temperature of the habitat. When put in the hands of the home gardener, it means paying close attention to a watering routine determined by climate and individual species.

Lithops aren’t hard to find on the market, whether as grown plants or as seeds. I myself ordered a variety of species in seed form from an online wholesaler a few years ago. Of course, my ambition outweighing my ability, I didn’t get a single sprout–I hadn’t done my research. But these petite succulents will do just fine under the care of someone who’s not afraid to tackle some light reading.

When grown from pot, being aware of their origin environment is the best way to keep these “living rocks” thriving and ultimately flowering, blooming with surprisingly spicy-sweet fragrances. Lithops are particular with their water and light preferences. At the NYBG we keep them in a controlled environment behind glass in our Conservatory’s desert habitat exhibit, but they’ll do just fine at home with the right planting medium. Coarse, quick-draining substrate and four to five hours of strong light each day (don’t overdo it) will produce hardy plants that can tolerate plenty of environmental abuse. But again, the watering schedule is key. 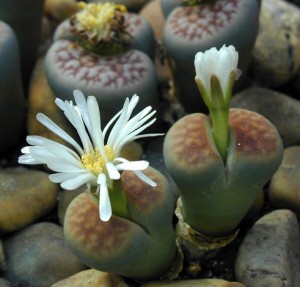 Lithops have a definite yearly cycle that requires a little attention to detail. Hitting the “Phoenix” metaphor might be a stretch, but watching the leaves shrivel and die back in winter only to reveal a fresh new pair sprouting up from within the husk is a wonderful curiosity. In a way, it resembles the molting of a cicada. But the plant needs tending to achieve this annual rebirth, with some watering in spring; barely enough to keep the plant firm in summer; thorough watering in autumn to prepare the plant for its change; and absolutely nothing in winter to allow fresh growth to take over. With different climate zones and different species, the schedule can shift forward or back, or have longer and shorter watering sessions–it makes for a knot of confusion for some beginners. But with a little study and understanding of what’s happening to your plant from one season to the next, you’ll breathe easier. The minute details of the tending routine can be found here.

My love for succulents lies in their innate weirdness–that “strangeness in the proportion” that Bacon and Poe spoke of. In the quirky case of lithops, they’re oddballs not only in the plant kingdom but among their own kind. Yet with their myriad patterns of color and endearing cycle of survival and evolution, the “living stones” still hang out near the top of my list. Not having to worry about going out each season to prune them also counts in their favor.

Be sure to see the lithops growing in the Enid A. Haupt Conservatory’s desert habitat when you come for our Caribbean Garden! It runs from now until February 26.