Posted in Gardens and Collections, Monet's Garden on June 7 2012, by Matt Newman 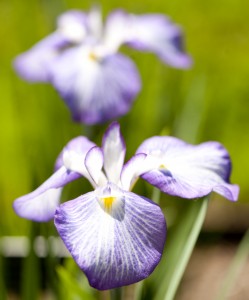 The fleur-de-lis may predate the French monarchy, but it’s forever the nation of the Seine that we associate it with, and in turn the iris that inspired the symbol. It’s timely, then, that the irises are blooming now for Monet’s Garden, just as they are across the Atlantic in the artist’s garden at Giverny, settled in the north of France. Walking through our own display in the Enid A. Haupt Conservatory, you’ll come upon several breeds of royal purple flower poking proudly from between the delphiniums, poppies, and furry mullein stalks. But outside, the iris is a constant spring resident!

In ancient Greece, Iris was considered the goddess of the rainbow, a messenger between divinity and humanity who carried the word of the pantheon to Earth. Her flowers do their best to make their namesake proud in at least that first regard, sprouting up along borders and plots throughout the Garden in every shade of purple, blue, pink, and often white or yellow. (True red remains the sought after grail of the iris connoisseur, a color that no amount of hybridizing has been able to produce reliably.) Not the full range of the rainbow, but pretty close, to be sure.

One of the best spots for sighting these elegant lovelies right about now is over along the Ladies’ Border, where some of our most exotic and unusual plants like to hang out. It’s generally a place for us to experiment, planting species which might not otherwise handle our particular zone’s cold weather, but the irises are old standbys, found in northern regions here, in Europe, and through parts of Africa and Asia as well. As of right now it’s the Japanese water irises that are stealing the show: Yamanobe, Dirigo Red Rocket, Satozakura and Haru No Umi. You’ll find these below, as well as some of the other varieties that open up here and there throughout spring. 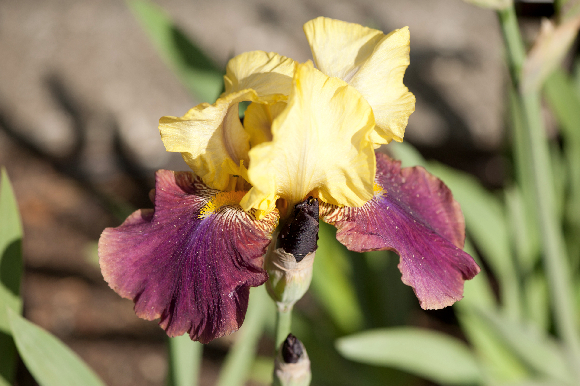 There’s such a mixed bag of ethereal iris varieties to be had, whether they’re bearded, dwarf crested, or Japanese. The smell, too, is magnificent: oddly reminiscent of fizzy orange, grape, and cherry sodas. And regardless of which species you zero in on, you pick up a little of that fleur-de-lis finery that speaks so loudly of the French aesthetic. It’s likely what Monet himself saw in the breed when he took to painting irises late in his life, sitting outside among his self-designed landscapes at Giverny. Hanging right now in our Rondina Gallery, the NYBG has one of the leading examples of his fascination, a piece painted just before or during the first World War that espouses the singular attraction of the iris. Don’t miss out–it will remain at the Garden until October 21.