Liz Neves is an herbalist, permaculturist, and compost turner living in Brooklyn, NY. 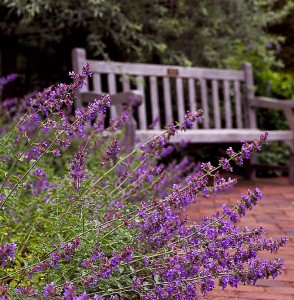 While both rose and lavender are revered for their beauty and aroma, they also have the ability to prove profoundly healing for the body in a variety of applications. Much of this is due to their appealing sights and scents, but there is much more than meets the eye–and nose–when it comes to lavender and rose.

“If you wish,” wrote the 16th century Azerbaijani poet Fuzuli, “you can find a cure for all of your problems in the rose garden, in curative rose water in the pot of the bud.” In hindsight, he was onto something.

Venerated for millennia, the rose has been seared into our consciousness as a supreme archetype of beauty, passion, and love–from religious to romantic. It is the symbol of Venus, the Virgin Mary, and the Prophet Mohammed, as well as a symbolic presence in the Hindu/Buddhist system of the body’s chakras. In ancient Egypt, Cleopatra was renowned for employing the flower as a beauty aid. Surely, the history of the rose is well-founded.

Several species of rose can be used both internally and externally, but some of the most common include cabbage rose (Rosa centifolia), Japanese rose (R. rugosa), dog or wild rose (R. canina), and Damask or Bulgarian rose (R. damascena). Of those, I find cabbage rose is best in teas, tinctures, and oil infusions for its slightly cooling and astringent properties. The flower has the ability to help regulate the menstrual cycle, is used as a digestive aid after meals, is a mild antidepressant, and can help reduce the severity of viral infections.

Meanwhile, Japanese and dog roses are prized for their rose “hips”–or fruit–which are high in vitamin C, antioxidants, and pectin. These are best collected after the first frost, when their color is brighter and texture softer. Finally, Bulgarian rose is considered the quintessential rose for making essential oil. Seeing as it takes nearly four tons of roses to make a mere 35 ounces of essential oil (roughly 40,000 blossoms per ounce), it comes at a high cost.

Of one of his favorite herbs, 16th century English herbalist William Turner wrote “that the flowers of lavender quilted in a cappe and dayly worn are good for all diseases of the head that come of a cold cause and that they comfort the braine very well.” Again, an exaggerated claim, but not so far off the mark.

Lavender (Lavandula spp.), like rose, has its health benefits. A member of the Lamiaceae or mint family, there are 28 known species and 450 current cultivars, known most commonly for a soft purple hue; the blossoms also come in white, pink, and dark purple varieties. These flowers are renowned for their calming scent, used often in sachets, dream pillows, and dried arrangements. The aroma can range from floral to camphoraceous, depending on the species, and this scent can help dictate how the blossoms are used. Floral lavenders (L. angustifolia, or English lavender) are esteemed in the natural perfume and cosmetic industry. On the other hand, lavenders that lean toward smelling of camphor (L. x intermedia or lavandins) are known for their cleansing and antimicrobial properties, as well as a tendency to ward off moths.

As for its etymology, the word “lavender” has its roots in the Latin “lavare,” meaning “to wash.” Appropriately, lavender was used in 17th century London to ward off the bubonic plague. Glovemakers would often scent their gloves with lavender oil, or fasten lavender bunches to their sleeves in the belief that this would prevent infection. Beyond its supposed guard against the Black Death, however, lavender is also used to alleviate headaches, aid digestion, and foster calmness and sleep. I always carry a spritzer bottle of alcohol mixed with lavender essential oil to prevent illness and promote calm when I travel.

Lavender and rose are two of the most versatile plants in the garden and the wild, and while each has its own distinct virtues, the two offer some similar benefits. Both lavender and rose are used to promote healthy skin by gently cleansing and reducing redness. Lavender essential oil is excellent for treating burns, cuts, and scrapes; it’s one of the few essential oils that can be used undiluted. Further, ground rose petals or lavender can be added to ground oats to make a gentle facial cleanser. They can also be infused into water as a lotion ingredient, or made into a hydrosol for a hydrating facial mist. And both plants can be infused into oil for a variety of applications.

Making your own infused oils at home takes very little effort. For a quick recipe, you can measure one ounce of dried herb (two ounces if fresh) per five liquid ounces of oil.

My favorite oils for infusions are sesame, olive, and coconut, but any organic, cold-pressed (or virgin) oil will do. Place the herb and oil into a double boiler (a Pyrex container in a pot of water works well) or slow cooker. If using the double boiler method, set the heat low, just until the water is steaming but not boiling violently. You don’t want to cook the oils too much, but rather warm them enough to extract the vital constituents from the herbs. Just be sure to replenish the water from time to time, as it will evaporate.

Gently stir the herb and oil mixture every half-hour or so, continuing for two hours. You can then strain the oil through a cheesecloth and sieve to remove the solids, then pour it into a dark-colored bottle for storage. The end result can be used in lotions, salves, or all by itself. It should keep for about a year, depending on the base oil used and how it is stored–a cool, dry, dark place is best.