Poolside with the Lotus

Posted in Around the Garden, Gardens and Collections on July 4 2012, by Matt Newman 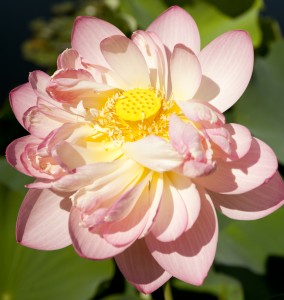 It’s warm but brilliant around the Water Lily Pools. Only shy a few deck chairs and some daiquiris, really. Ivo and I wandered over to the Conservatory the other day to figure out what the Garden’s horticulturists were getting themselves into, only to find everyone up to their waists in the pond. He immediately jumped into a pair of chest-high waders and joined the group–even if it meant swimming for them, Ivo had to have macro shots of the freshly-planted tropical water lilies. Just as I did, I suspect some of those gathered around the pool must have felt the slightest twinge of jealousy.

Meanwhile, I puttered toward the lotus blossoms.

Like I mentioned on Twitter, the scope of these mythic flowers isn’t something you can reconcile until you see them up close. A few of the Nelumbo nucifera blooms easily near the size of my head when in full splay! They stand there like planets in rings, petals spreading every which way in gradients of rosy color. Others, yet to open, point straight up in cones of spiraled pinks. Still others have already come and gone, leaving fresh seed pods behind. Through this cycle, with every point in the arc visible at once, I can see why the lotus is such an important symbol in followings like Buddhism and Hinduism. I’d have to write a tome to cover even a hint of its many spiritual meanings, from purity, to detachment, to the cycle of life itself. 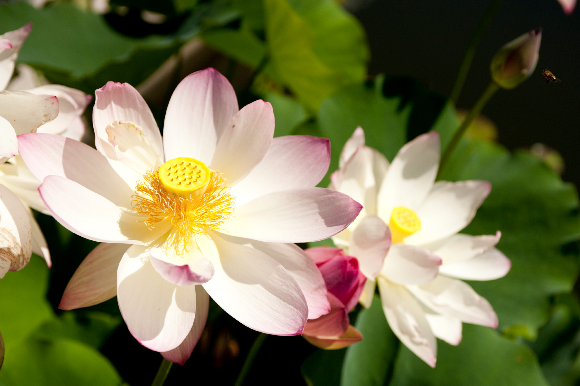 You’ll find the lotus flowers growing in the hardy water lily pool, as well–right alongside the water lily cultivars that Monet spotlighted in Giverny. And it happens that the artist was equally familiar with both species. The Latour-Marliac nursery’s historical documents show that Monet included as many lotuses in his first plant order as he did water lilies; it’s possible that, had they not so thoroughly failed to take in his pond, the last years of Monet’s life would have been dedicated to painting something far different from the Nymphaea murals we see today.

The way VP for Glasshouses and Exhibitions Fran Coelho tells it, the flowering period for our lotus plants is rarely set in stone. We like to see them thrive between June and August, with blooms lasting from one to five days before being replaced by yet more flowers. But this year’s crooked weather offers no guarantees. For now, we admire what we’re already seeing, and keep our hopes high for a full summer of color.