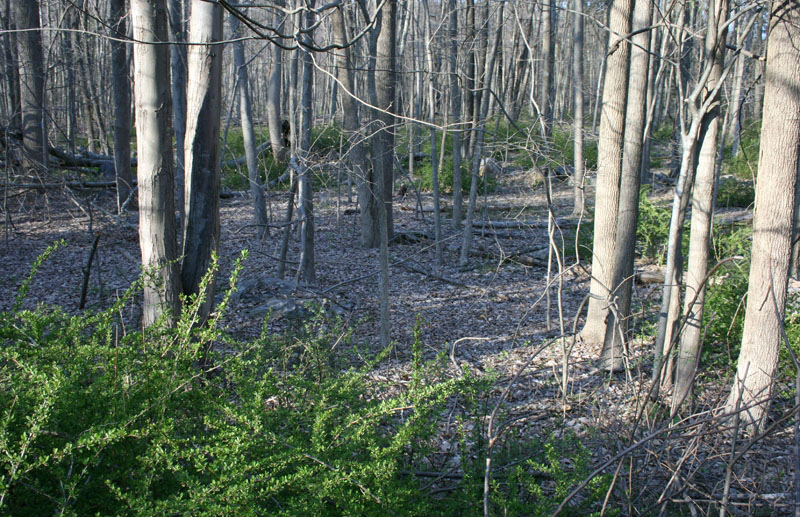 When I talk to other botanical enthusiasts about wildflowers of the northeastern United States, our conversations often return to the same question: “Where have all the spring wildflowers gone?” The most obvious response is that there are too many deer eating understory plants in our forests. However, that is only one of several reasons explaining the loss of spring wildflowers, among which is the presence of invasive plants which outcompete many species of our native flora. One of the worst invasives, the Japanese barberry—Berberis thunbergii DC—has had a major impact, leading me to rate it as one of the most noxious invasive plants in the northeast.

After seeing what I have to say, I would love to know if you can nominate an invasive species nearly as bad as this resource glutton!

Herbaceous plants that flower and set fruit before northeastern forest trees flush new leaves are called spring ephemerals, as their above ground life cycle is limited to the early spring. A few notable examples are hepaticas, Dutchman’s breeches, and trout-lily, many of which my wife, Carol Gracie, has discussed both here and in her book, Spring Wildflowers of the Northeast: A Natural History. The life cycle strategy of these species is to flower, produce fruit, and flush new leaves before the leaves of the forest’s trees block most sunlight from reaching the forest floor—without enough sunlight, native understory plants are not able to photosynthesize efficiently. 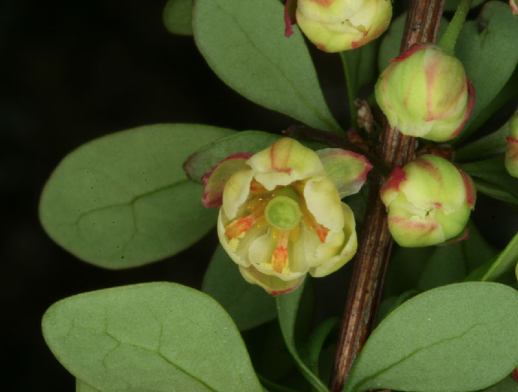 ◄ Back
Next ►
Picture 1 of 6
An apical view of a flower of the Japanese barberry.

Invasive plants disrupt the life cycle of spring ephemerals by taking up space; blocking sunlight; and using nutrients that were claimed by native plants before invasive species became a problem. The reason this species of Berberis is so successful is because it is one of the first understory plants to leaf out, using the same technique the spring ephemerals do to get a leg up on them. Individuals of this barbarous barberry are now such dominant plants that the understory in our area is colored barberry green in the spring, well before other plants flush their leaves.

Another reason for barberry’s success is that it has sharp spines to dissuade deer from eating the tender leaves. Without this protection, even if spring ephemerals sprout, there is a good chance they will be nibbled to the ground by deer before producing flowers and seeds. Further, a very fine, diffusive system of roots branching from the tap root makes it possible for this plant to hog the nutrients needed for plant growth. And common to many invasive plants, one barberry plant can fertilize the eggs in the ovules of its flowers with its own sperm, meaning that a single plant can start an entire population. Finally, the red fruits of barberries are efficiently dispersed by birds, allowing this species to spread far and fast. In short, barberry was already adapted for success when it arrived from Asia. 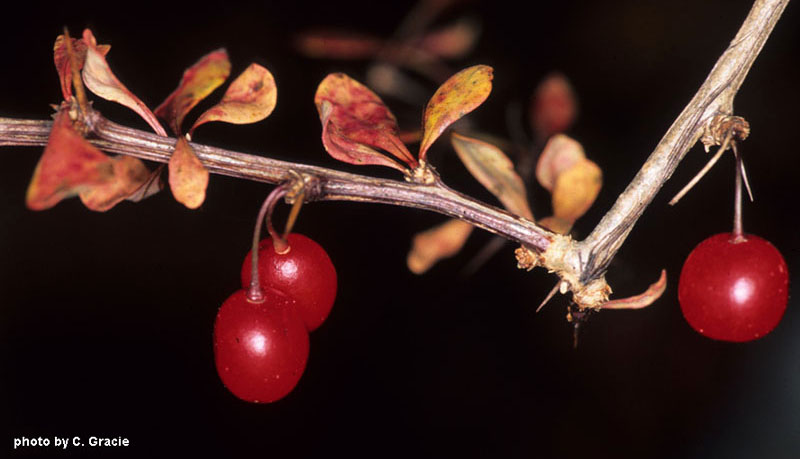 Although it would take an army to get rid of barberry throughout its new range, it is possible to control this species at the local level. For example, I eradicated them from the small wood lot behind our house and have kept them under control by ripping up the few plants that periodically invade. Barberry plants are relatively easy to pull up, especially when small, but be sure to wear thick gloves to protect against spine punctures. The roots, which have bright yellow centers, are easily broken, meaning you must pull the tap root from the soil carefully if you want to avoid a new plant sprouting from it. This effort, while time-consuming, is well worth it–especially with research suggesting that barberry has become the preferred home for Lyme-carrying ticks.

There is hope that this forest enemy can be kept under control in nature reserves, but it would take many volunteers to make that happen. Sadly, the alternative—giving up and letting barberry plants grow where they can—has a greater cost: the continued disappearance of our spring ephemerals. If you have experience with trying to control Japanese barberry, please let us know in a comment.