The Shifting Science of Botanical Nomenclature — I

Memorizing scientific names can be an exasperating experience for nature lovers, especially when learning that those names occasionally change for complicated reasons. Last week I discussed the structure of scientific names based on the Linnaean binomial system. Now, I explain some of the most common ways scientific names change based on the law of priority, a rule stipulating that the first name validly published for a species is the correct name for it. Be aware that this may not be the most beginner-friendly topic, but it is integral to understanding the complex business of botanical nomenclature.

The rules of botanical nomenclatures are formalized in the International Code of Nomenclature (ICN), which is updated every five years at the International Botanical Congresses; the most recent such congress took place in Melbourne, Australia, in 2011. Although the ICN defines the rules for naming plants, it does not provide guidance for determining if a species is distinct from other published species, thus justifying a new name. The taxonomic validity of species is determined by reviewers of scientific papers in which names are either proposed or changed, as well as by the acceptance of the names by the scientific community in their scholarly works such as Floras.

There are two primary resources used by botanists for finding out the correct spelling of a name: the authors who published it, and the journal in which it was published. These are TROPICOS, an online database of the Missouri Botanical Garden and the International Plant Name Index (IPNI) maintained by the Royal Botanic Gardens, Kew.

The most frequent causes behind a name change are when an earlier published name is discovered for a currently used name; a species is moved from one genus to another genus; and a name that was published at one level is changed to another level in the taxonomic hierarchy. The basic rules followed in these cases are that a plant species can only have a single name, and that the first name published should be the accepted name. Nevertheless, the ICN allows exceptions to the Code if applications of the rule cause major inconvenience to the end users. In that case, the names of families, genera, and species can be “conserved” or “rejected” over a name that has priority. This only happens after a proposal is submitted and accepted by the ICN, one that includes a detailed statement of the cases both for and against conservation or rejection. The proposal must then be published in Taxon, the journal of the International Association for Plant Taxonomy. 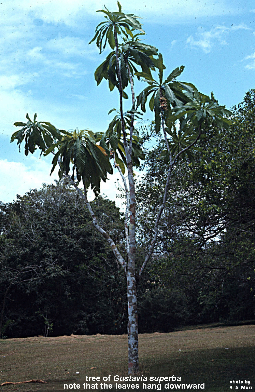 The most common reason for changing a species name is that the same species was described more than once by botanists. This was common in early botanical exploration, when nearly every collection represented a species that had never been collected and formally described. For example, a French botanist could publish a species name based on collections from French Guiana, while an English botanist could give the same species a different name based on collections from Guyana. As a result, there are often many names applied to the same species, but it is the first name published for it that is the accepted name. All subsequently applied names are then considered synonyms of the first published name. For example, Lecythis elliptica (published in 1825 by C. S. Kunth) is a synonym of the earlier published name L. minor (1763 by N. J. von Jacquin).

As previously mentioned, moving a species from one genus to another can also result in a name change—Chytroma brancoensis R. Knuth is an example. In this case, I determined that the characters of this species are the same as those used to define Lecythis (not Chytroma) and made the new combination Lecythis brancoensis (R. Knuth) S. A. Mori. There were two steps involved in the process: establishing that the features of the species represented by C. brancoensis justified moving it from Chytroma to Lecythis, and using the law of priority to select Lecythis (1758 by Per Loefling) over Chytroma (1874 by John Miers). This is an example of creating a new species name because a species name was originally placed in the wrong genus, thereby necessitating the creation of a new combination. Chytroma brancoensis is now a synonym of Lecythis brancoensis.

Finally, a name change is called for when a published name from one rank is elevated or demoted to another rank. This only applies to species that have been more finely classified (e.g., to subspecies or varieties instead of just to species). I use the former subspecies of Gustavia macarenensis Philipson to illustrate name changes caused by a change in rank—in this case moving what was once considered a subspecies to the rank of species.

When I first started my studies of the Brazil nut family, I emphasized similarities between populations rather than differences. Since then, I have concluded that it is best to acknowledge populations that can be consistently separated as species by morphological, ecological, and geographical differences. In other words, I am now more of a splitter than a lumper. In 1979, for example, I described G. macarenensis Philipson subsp. paucisperma S. A. Mori for the Venezuelan population of a species at the time known only from the Andean slopes of Colombia and Ecuador. When a subspecies name not including the type of the species is created, another subspecies is automatically generated that repeats the species name. In this example, the subspecies represented by the type is called G. macarenensis Philipson subsp. macarenensis. Note that because the subspecies name is the same as the species name it is not necessary to add the author’s name to the end. I now treat these erstwhile subspecies as G. macarenensis Phillipson and G. paucisperma (S. A. Mori) S. A. Mori, respectively. In the latter name, I am both the author of the name and the author of the change in rank from subspecies to species.

One final point: the law of priority only applies to a name in the rank that it was published. In other words, when a subspecies is elevated to species, it is not necessary to use the original subspecies name. For example, John Dwyer described Gustavia superba (Kunth) O. Berg var puberula Dwyer in 1965, but the same entity was described in 1974 as G. grandibracteata by Tom Croat and me. We had failed to recognize that Dwyer’s variety was the same as our G. grandibracteata. Fortunately, Dwyer’s name was published as a variety and because the law of priority for a name does not apply outside of the rank in which it was published, the Croat and Mori name is the correct name. Consequently, G. grandibracteata Croat & S. A. Mori is the correct name for this species and G. superba (Kunth) O. Berg var. puberula Dwyer is placed in the synonymy of one of the most beautiful tropical plants I have ever seen. But I am curious to see if you agree; view the slideshow above and decide whether or not you think this plant deserves classification as a separate species.

Love the article! Beautiful scan (photograph?) too – how are you doing those?

I tend to split at the species level and lump at the genus level.