Posted in From the Library on March 21 2019, by Esther Jackson 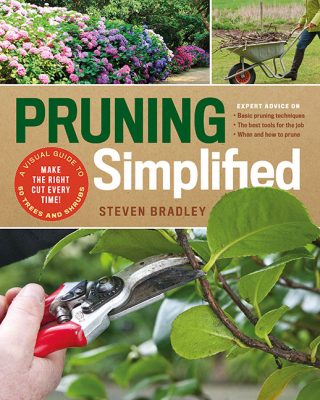 Pruning Simplified: A Step-by-Step Guide to 50 Popular Trees and Shrubs (2018) is a helpful new book from Steven Bradley for Timber Press. Bradley is a freelance garden writer and broadcaster who has over 20 years of experience teaching horticulture in colleges in England. Pruning Simplified, in addition to including some general introductory information, suggested equipment, and techniques, is primarily organized as a directory of plants. For the most part, the directory is organized by genus, with granularity provided when there are deciduous or evergreens species in the genus, different forms within the genus (climbers versus ramblers, for example), and different flowering times within the genus.

Each plant group includes a general note about why the group might be planted, (for example, “Magnolia flowers are among the most beautiful of all blooms, and a tree laden with the spectacular flowers is an unforgettable sight”), information about why to prune, tips for pruning, when to prune, which species within the genus (or group) are pruned in the recommended manner, and which tools to use. In addition to these pointers, there is greater information about formative pruning, routine pruning, and remedial pruning.

Each plant group includes text on one page and a full-color with multiple illustrations on the other page. The color illustrations includes a general habit of a mature plant, a large illustration of the plant in detail, and indicators as to where to perform routine pruning, areas where dead and defective growth may be removed, and general illustrations to demonstrate concepts within the text in more detail. Finally, the book closes with a section on “special features” pruning, covering trees, standard trees, conifers, hedges, groundcover, low-maintenance pruning, renovation pruning, and specialized pruning in brief detail.

Pruning Simplified seems to be written for a general, global audience, so it seems unfair of me to harp on invasive species in this review. Nevertheless, readers should be wary of using this book as a guide to select plants for the Northeast—several problem species for this region are included in the selected plant list.

Ultimately Pruning Simplified is a nice new book, and a helpful supplement to the standard texts in this field, namely An Illustrated Guide to Pruning by Edward F. Gilman and Cass Turnbull’s Guide to Pruning.)