Posted in From the Library on June 6 2019, by Esther Jackson 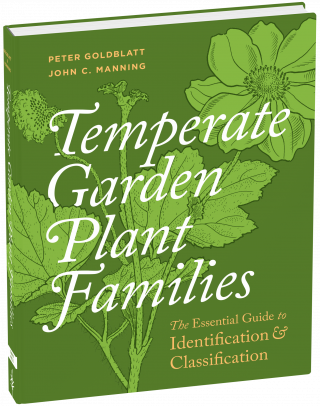 Temperate Garden Plant Families: The Essential Guide to Identification and Classification (2019) sets out to provide gardeners, horticulturists, and plant enthusiasts working with plants of temperate climates information about key families including identification and classification. The book is authored by Peter Goldblatt, an Iridaceae expert recently-retired from the Missouri Botanical Garden, and John C. Manning, a senior specialist scientist at the South African Biodiversity Institute who also works with Iridaceae. The two have collaborated on no fewer than 15 works.

The book’s introduction covers the basics of family classification, plant nomenclature, and plant morphology for readers. 92 of the familes in Temperate Garden Plant Families are arranged alphabetically, with 35 families described with related families. Not all plant families are included—just those for which there is horticultural interest in temperate regions. In many cases, historic families are recognized because they are morphologically distinctive clades (for example, Agapanthaceae and Alliaceae), a useful approach given the arbitrariness of rank and its hierarchical nature, so that these groups can still be diagnosed, whether called families or subfamilies or tribes.

The family profiles themselves are helpful in that they include not only morphological details about each family, but also information about popular cultivated species and species of particular agricultural or medicinal importance. This is the kind of information that is often included in more scientific texts, and so its inclusion here for a different audience nicely walks the line between a technical scientific manual and popular reading for a lay person. It might be a little advanced in places for complete novices, but anyone with some basic horticultural or botanical knowledge should find the information readily accessible and understandable. More advanced users may not find every obscure classification detail with which they are already familiar but will still love the book for the clarity, modernity, and simplicity of its synopsis.

Where the book falters is as a visual identification resource. Morphological features of different families are mentioned, but the corresponding photographs don’t always reflect what are mentioned as the most distinctive features. For example, Aceraceae (the maple family) are “recognizable primarily by the fruit, the familiar two-winged, two-seeded samara.” A samara is typically defined as an indehiscent winged fruit, usually also referred to as simple or one-seeded, so it is a little unusual to refer to a maple fruit as a two-winged, two-seeded samara. Maple fruits split apart into one-seeded segments, so are classified by many as schizocarps with samara-like (samaroid) segments. Historically some workers have ignored the ‘splitting apart’ aspect and just called the fruits samaras (fused with two or three per flower). Setting aside any quibbling over schizocarpic samaras vs. samaroid schizocarps, both of the included maple photographs are of flowers. While beautiful, they’re not as useful as a fruit photo would have been, especially as fruits are mentioned as important for recognition.

Maples are related to buckeyes (Hippocastanaceae) and soapberries (Sapindaceae) as discussed in the text, forming a clade often treated as a more broadly defined Sapindaceae. Sapindaceae in the broad sense are partially defined based on the uniting feature of typically only having eight or fewer stamens that are often pubescent or papillate, which is not discussed in the text. If the only maple photos are flowers, why aren’t the floral details more integrated into the discussion of classification and identification? Given that most Sapindaceae tend to have compound alternate leaves and most maples tend to have simple opposite leaves, recognizing the maples as a group is very useful, especially as they are most common in temperate zones. Thus, the photos of flowers would have been useful in the context of discussing classification, had that information been provided.

A diverse array of photos to accompany the descriptions would have provided greater utility for visual identification, and integrating the existing photos more fully into the text would have been useful for discussion of classification, especially for readers not as familiar with botanical terminology. Readers who are seeking more detailed photographs of morphological features may find the Photographic Atlas of Botany and Guide to Plant Identification by James L. Castner and J. Richard Abbott a more useful resource for this purpose. Ideally, the two works might be used together, as the Photographic Atlas (organized by taxonomic groups), does not include much narrative information about each family, but rather focuses on visual identification with 2,000+ color photos.

Ultimately, Temperate Garden Plant Families is a nice new book and will provide useful information about botanical morphology and classification to new audiences. When used with a visual resource like the Photographic Atlas, it is a strong new publication sure to be useful to many.