Posted in Around the Garden on September 7 2011, by Rustin Dwyer

Okay, it’s a little rainy and misty this week, but you know how I think of it? You know those sprayers at the supermarket that shoot mist all over the lettuce and carrots? There’s a similar situation going on at the Garden right this very moment at our weekly Greenmarket. A bunch of beautiful produce is getting a fine drizzling mist of cool, fresh water.

The only difference between this and the supermarket is the products here were picked or produced less than 12 hours ago from locally sourced farms, bakeries and orchards! 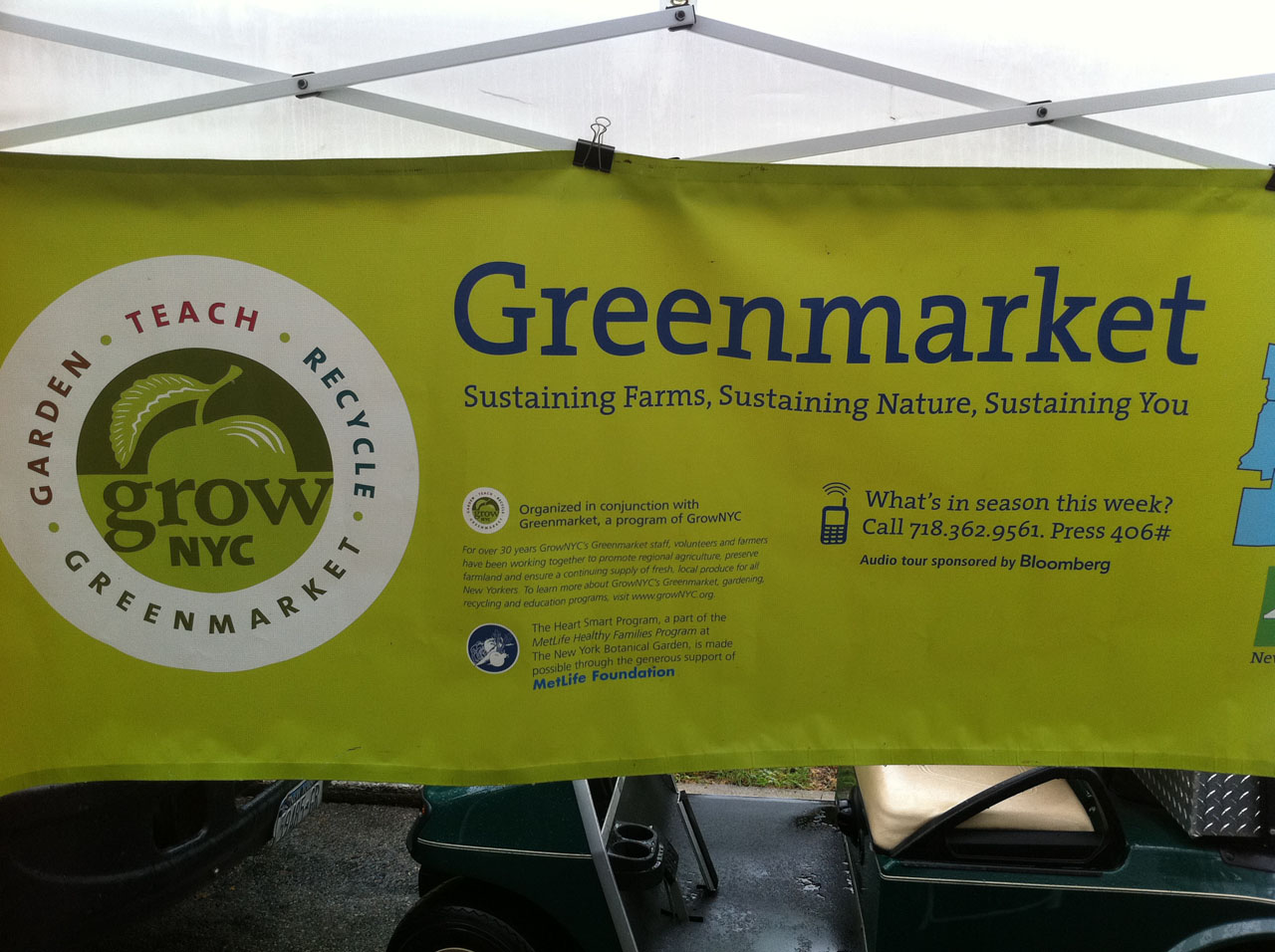 Head below the jump to see what produce the farmers brought this week.

Posted in Behind the Scenes on August 18 2011, by Rustin Dwyer

We have a really great video for you today about the ongoing efforts to keep the Bronx River clean and healthy.

The Bronx River–which runs through a dramatic gorge in the Garden–is New York City’s only freshwater river (the Hudson is a tidal estuary as far north as Troy, and the East River is a tidal strait). The river’s transformation from a dangerously polluted waterway in the mid-20th century to the healthy, clean home of New York City’s first beaver in 300 years is an ecological success story, with new chapters written daily.

So sit back and enjoy this trip down the Bronx River in a flotilla of canoes manned by volunteers from the Bronx River Alliance and a team of Garden horticulture interns.

Posted in Around the Garden on August 12 2011, by Rustin Dwyer

It’s National Farmer’s Market Week! What better way to celebrate than with a trip to the Garden’s weekly Greenmarket to chat with some of the great community volunteers, politicians, and health advocates who turn up every Wednesday to dispense advice to the market’s shoppers?

The New York Botanical Garden Greenmarket occurs every Wednesday from 9 a.m. to 3 p.m. The market will run until Thanksgiving.

Posted in Around the Garden on August 10 2011, by Rustin Dwyer

It’s the second month of our photo contest, and a hearty congratulations to Barbara Reiner for winning our second monthly NYBG-IGPOTY photography contest. The NYBG photo judges had a tough time picking the winner this month, but in the end felt that Barbara’s rose triptych just edged out cindy {k}’s scene among the tulips for this month’s theme “American Beauty.” Barbara will receive a NYBG gift pack, which includes two All-Garden Passes, a $25 credit towards the Adult Education class of her choice, a catalog for the Library exhibition Historical Views: Tourists at the Alhambra, and the catalog from Hirschfeld’s Broadway Scrapbook. We’re also still working on getting copies of the photography book, Better Plant and Garden Photography, written by IGPOTY founder Philip Smith, over from the U.K. as well. Congratulations Barabara! Please send us an email with your contact information through this form (select website from the pull-down menu).

Head below the jump to see the rest of this month's winners.

Fun, Fresh and Simple — Cooking in the Family Garden

The Children’s Gardening Program at the Ruth Rea Howell Family Garden gives kids ages 3-12 a chance to team-up to plant, tend and harvest their very own plot in the Garden. But that’s only half of the story — of course the most fun part is eating all of that homegrown produce!

Stop by the Family Garden to enjoy cooking demonstrations throughout the week, offering simple but delicious ideas on how to take advantage of our garden’s bounty. Our hands-on activities will help you to remember that growing, preparing and eating good food needs to be FUN!

All this month, the gardening fun in the Family Garden focuses on plants that are pickled. Enjoy the harvest of fresh cucumbers by making your own pickles to take home. For a rundown of what’s happening now, check the “plan your visit” section of our website.

Here’s a short video featuring two of the amazing staff members in the Family Garden, Rachel and Annie, showing you one of the easiest dishes around – a simple herb confetti. But as you’ll see, harvesting and preparing the dish is almost more fun than eating it!

In the heat of the summer (and this one has especially been hot!), there are some beautiful blossoms to behold. From daylilies, hibiscus, waterlilies and of course roses, summer gardens everywhere are swelling with colorful buds. But the same just can’t be said for most woody plants.

That’s what makes the subject of this week’s video plant profile so special. In the summer heat, most woody plants have no showy flowers, but the genus Aesculus, more commonly known as buckeye, “buck”s that trend.

Check out the video below hosted by Plant Records Manager Jon Peter as he covers a few of the many types of Aesculus you can see at the Garden, and who knows, maybe in your own backyard?

Flamenco at the Garden? ¡Si!

The New York Botanical Garden has hosted many an exhibition over the years, from dazzling Orchid displays to Chihuly’s ethereal glass creations to the intriguing art of Japanese chrysanthemum growing and everything else in between. But never has an exhibition catered to all five senses in the way Spanish Paradise: Gardens of the Alhambra does.

The air in the Enid A. Haupt Conservatory is filled with fragrant herbs and zesty citrus blossoms, coupled with the colorful blossoms of ornamental sages and a range of flowering plants. Meanwhile, the Garden Cafe is serving up mouth watering slices of Serrano ham complimented by fruit-laden sangria. And for those of you who make the trip out on the weekend, the Arthur and Janet Lecture Hall is filled the rattle of castanets and the rhythm of a cajon (box-drum).

The Garden is pleased to host a summer residency for the dance group FLAMENCO: inside/out. The trio performs each Saturday and Sunday for the run of the show (through August 21st). You can catch them each day at 1,2, and 3 p.m. in the Lecture Hall and the show is included with your Garden admission. Here’s a little taste of what to expect, both in the Conservatory and the lecture hall!

Have you been seeing drifts of what appears to be white, fluffy snow all over New York City lately? Don’t worry, you’re not imagining things, but it’s not snow.

In fact it is millions upon millions (and possibly billions upon billions) of Cottonwood tree seeds trying to make their way to a nice comfy spot to set down roots and grow into one of the City’s most majestic native trees. Want to learn more? Then check out this great Video Plant Profile with NYBG Plant Records Manager, Jon Peter.

Birding at the Garden

Posted in Video, Wildlife on June 3 2011, by Rustin Dwyer

The Garden is an oasis for birds and birders alike.

We talked to some visitors and staff about their favorite birds and why they love birding at the Garden. Take a look, and then tell us (by leaving a comment): What is your favorite bird? Have you had a great birding experience at the Garden?

Want to learn more about birding at the Garden? Then join Debbie Becker for one of her free, weekly Saturday bird walks! To join the walk, meet at the Reflecting Pool near the Leon Levy Visitor Center before 11 a.m.