Small Treasures in the Mertz Library: Signature of the Revolution

William Craik (1703–1798), a former owner of a book in the Rare Book Room of the LuEsther T. Mertz Library, was not a famous person, but he had an important influence on the founding of the United States. Craik signed his name and the year “1764” on the fly leaf of Statical Essays; Containing Vegetable Staticks; or an Account of some Statical Experiments on the Sap in Vegetables…, the third edition of which was published in 1738 by Stephen Hales (1677–1761).

Craik was the eldest son of a landowner in Arbigland, Scotland. When he inherited his father’s run-down estate in 1736, he set out to improve it by using new agricultural techniques and machinery, and Hales’s book would have been essential reading for him.

Craik had at least one illegitimate child—a son—before he married. That boy, James Craik (1730–1814), studied medicine at the University of Edinburgh, then joined the British Army and served in the West Indies. In 1754 he joined the Virginia Provincial Regiment as a surgeon and saw action in the French and Indian War, serving with and becoming a close friend of George Washington, who eventually commanded the regiment. 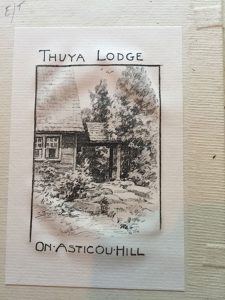 As I huffed and puffed my way up that steep path from the road to Thuya Garden high on the hillside near Northeast Harbor on Mount Desert Island, Maine, I thought that this time curiosity about the books in the Rare Book Room of the LuEsther T. Mertz Library had taken me too far. That day in July 2016 was blisteringly hot and I was sweaty and thirsty. But there it was at last, a rustic board-and-batten house with a porch, appearing out of the forest of evergreen trees and shrubs at the end of the stone path. It looked just like the drawing on the bookplates I’d found in two books in the Mertz Library.

Joseph Henry Curtis (1846-1928) began to summer at Northeast Harbor on Mount Desert Island on the Maine coast in the 1870’s and later he bought a property on the slope of a mountain near Northeast Harbor, becoming one of the first summer residents of a growing summer colony of wealthy families. Curtis spent the rest of his life turning his property into a mountainside park, building a trail with granite stairways and scenic lookouts ascending the steep slope to a board-and-batten cottage that he named Thuya Lodge after the local white cedar tree, Thuja occidentalis. In 1905 Curtis created a trust to maintain his estate as a public trust for the local community; when he died his friend Charles Savage became director of the trust.

Small Treasures in the Library: From Bibliothec Bignon

A copy of Quadripartitum botanicum de simplicium medicamentarium facultatibus… by Simon Paulli (1603–1680), published in 1708, in the Rare Book Collections of the Mertz Library reveals through its notable first owner European society being transformed by science and a new spirit of international cooperation at the beginning of the 18th century. This thick volume of materia medica written by a Danish scholar and court physician was regarded at the time as the standard work on medical pharmacology and an essential reference volume for contemporary physicians and scientists.

Visitors to a garden are often impressed by the showy, brightly colored roses and barely notice the smaller, humbler daisies. Likewise, visitors to the Rare Book Room in the LuEsther T. Mertz Library of The New York Botanical Garden often admire the large folio volumes of botanical illustrations by renowned botanical artists, but are unaware of the treasures among the smaller print volumes on the shelves. For the last two years I’ve been examining the names written and bookplates pasted in these books, trying to trace the histories of these books and to identify their former owners. This detective work has revealed that many books have led fascinating lives.

One book that has had a particularly noteworthy life is Apologia adversus amathum lusitanum by Pietro Mattioli, first published in 1558. Mattioli (1501–1577) was a well-known physician, botanist, and natural scientist from Siena, Italy. His book is a discussion of another book, first published in 1557, In Dioscoridis Anazarbei de materia medica libri quinque, enarrationes eruditissimae by Lusitano Amato (Juan Rodrigo Del Castel-Branco) (1511–1568), a well-known Jewish-Portuguese physician and natural scientist. Amato’s book is a discussion of De materia medica, written in the first century A.D. by the Roman physician Dioscorides (c.A.D. 40–90). De materia medica was a comprehensive compilation and description of plants and their derivatives and of animal and mineral substances used as medicines at that time and was one of the most important reference books on medical substances in the Western world for 1600 years.