Posted in What's Beautiful Now on May 1 2017, by Matt Newman

From the bloom of our ever-fragrant lilacs to the dainty dramatics of the Auricula Theater, spring’s progress isn’t hard to see here at NYBG. The crabapples are waking near Daffodil Hill, and the magnolias—always some of the season’s top charmers—are still trucking along with pink and white blooms. Meanwhile, the Azalea Garden is becoming a sea of color. 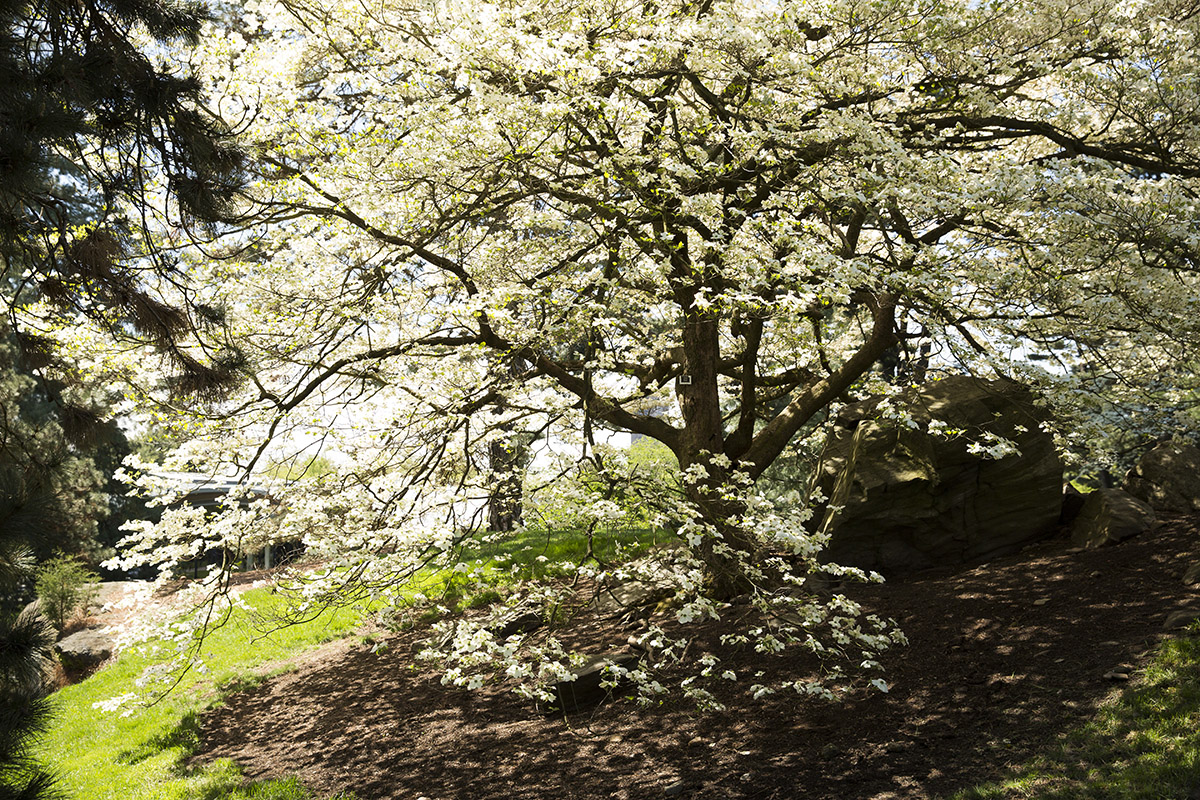 Flowering dogwood is a lovely deciduous tree with year-round appeal including spring blooms, showy fall fruit and foliage, along with interesting bark. In spring before the plants fully leaf out, small green and yellow flowers open surrounded by creamy white, showy bracts. Groupings of the cultivar ‘Cherokee Princess’ are located in the native border of the Native Plant Garden and on the slope outside the Stonemill. Other cultivars and species of this smaller native tree are concentrated in the Native Plant Garden, Azalea Garden, and in the Forest.

Posted in Photography on April 14 2016, by Matt Newman

The armillary sphere in the Perennial Garden finds itself surrounded these days by a cornucopia of spring flowers, from tulips and daffodils to Viola in a variety of hues. 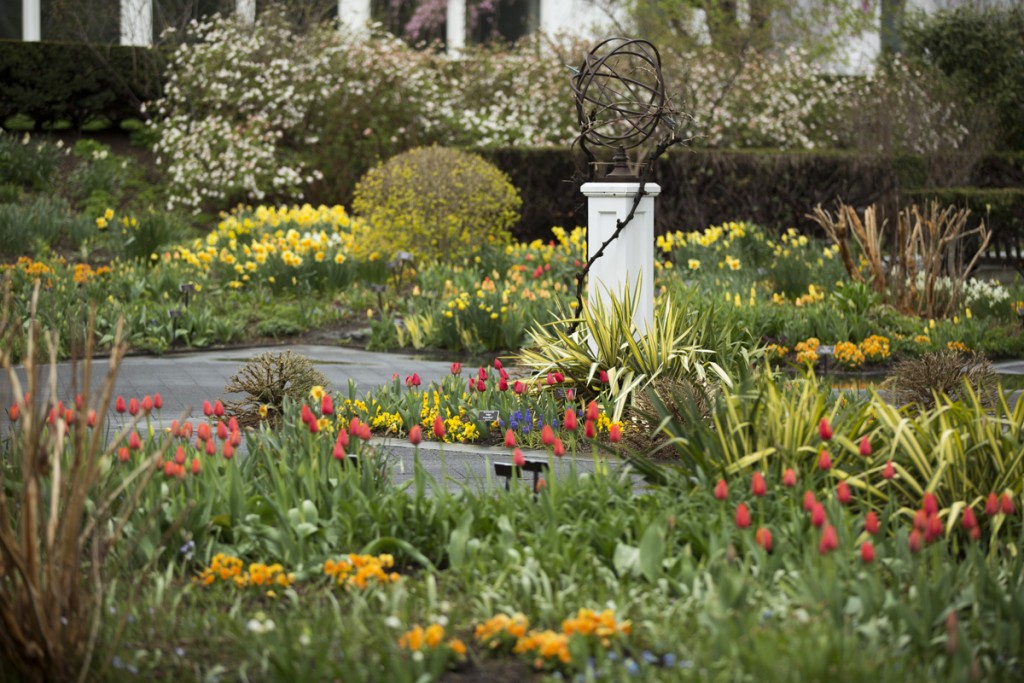 The armillary sphere in the Perennial Garden – Photo by Ivo M. Vermeulen

Posted in Photography on April 27 2015, by Lansing Moore

Between the billowing canopy of cherry blossoms above and the rolling waves of daffodils below, there hasn’t been much attention paid yet this spring to the classic tulip—such as this Darwin hybrid tulip. 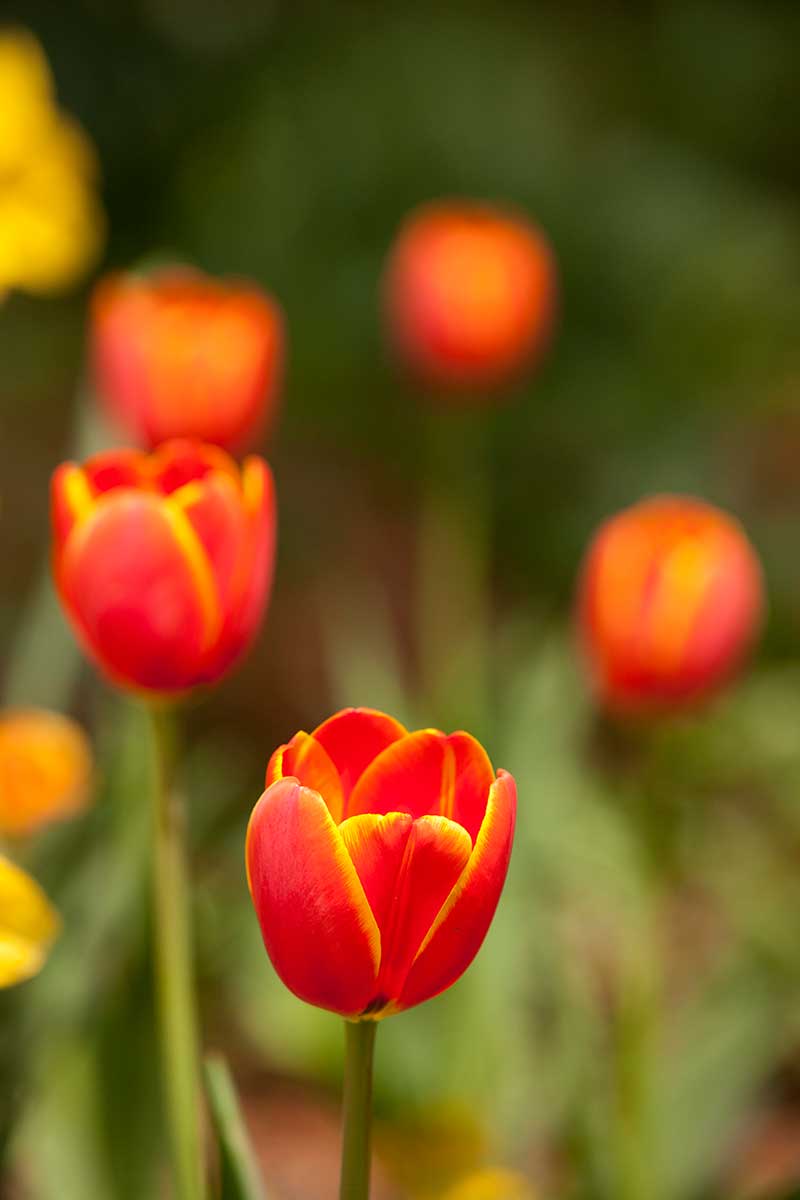 Posted in Photography on May 2 2014, by Matt Newman

I’m having a hard time recalling winter right now, what with all these tulips. 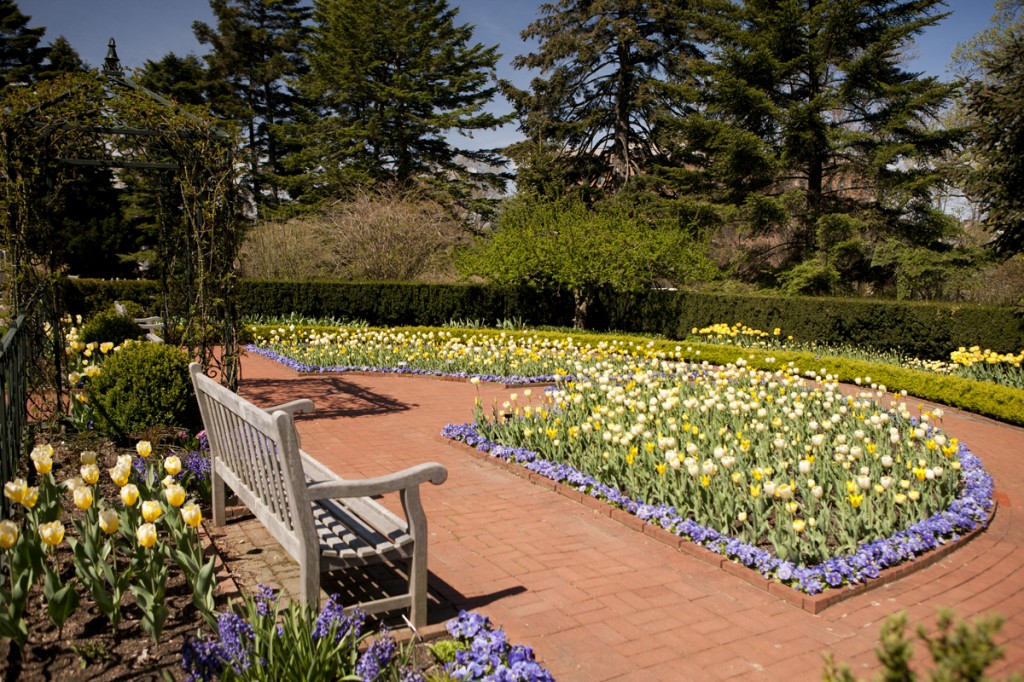 In the Home Gardening Center – Photo by Ivo M. Vermeulen

Posted in Photography on May 1 2014, by Matt Newman 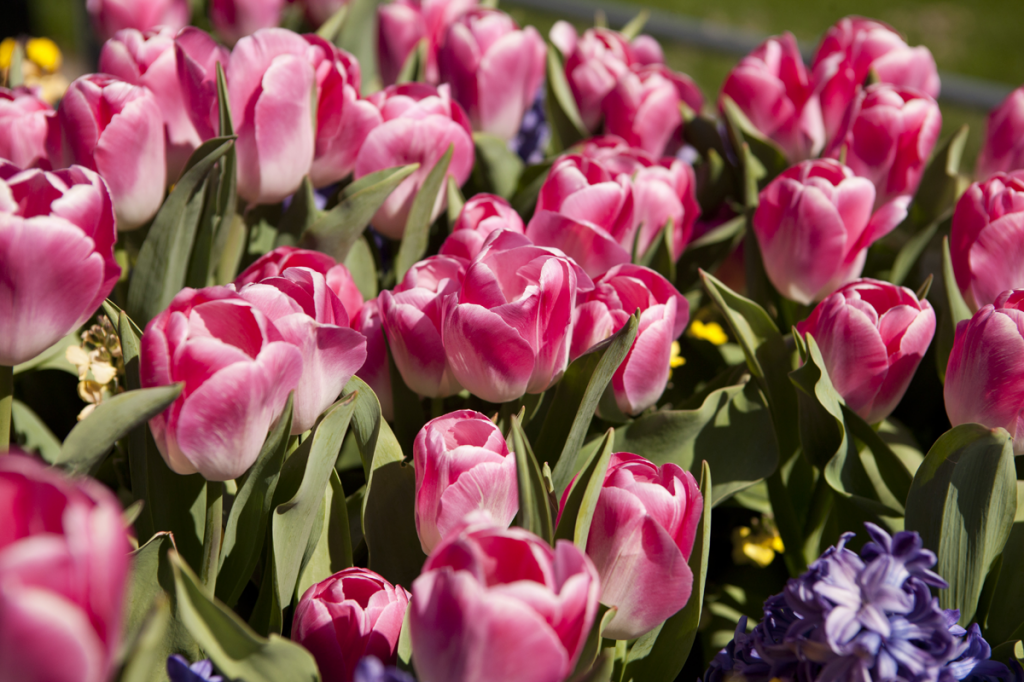 Tulips in the Visitor Center – Photo by Ivo M. Vermeulen 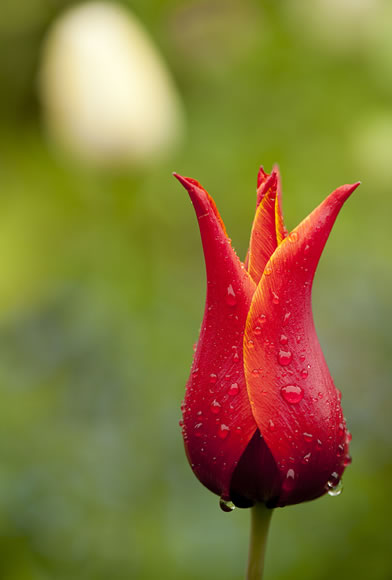 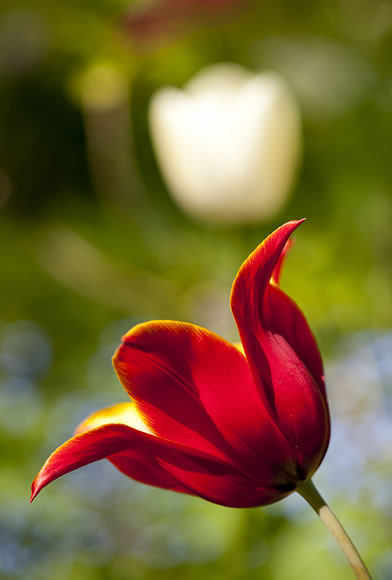 Posted in Photography on April 30 2013, by Ann Rafalko 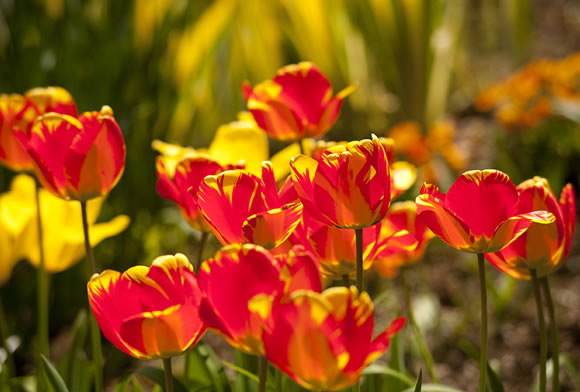 Say that it is a crude effect, black reds,
Pink yellows, orange whites, too much as they are
To be anything else in the sunlight of the room,

Too much as they are to be changed by metaphor,
Too actual, things that in being real
Make any imaginings of them lesser things.

Posted in Photography on April 29 2013, by Ann Rafalko

Some of this year’s class of tulips seem to be exhibiting a rebellious streak.

Posted in Gardening Tips on November 1 2012, by Sonia Uyterhoeven

As I mentioned the other week, I have been making the Garden rounds to talk to different colleagues about their favorite bulbs. We often like to use tulips here at the NYBG as part of large annual displays in springtime. We plant the bulbs in November, which then flower in May. By June, they have all been dug up and recycled in the compost pile.

The reason why tulips are not often part of permanent displays is that many varieties don’t come up consistently in subsequent years. They look glorious the first year, spotty the second year, and prove fairly anemic moving into the third and fourth years. Happily, this is not true with all tulips, and many make wonderful, long-lived additions in a garden provided they have good drainage.

Posted in Photography on April 29 2011, by Ann Rafalko

Something about the way they twist
As if to catch the last applause,
And drink the moment through long straws,
And how, tomorrow, they’ll be missed. 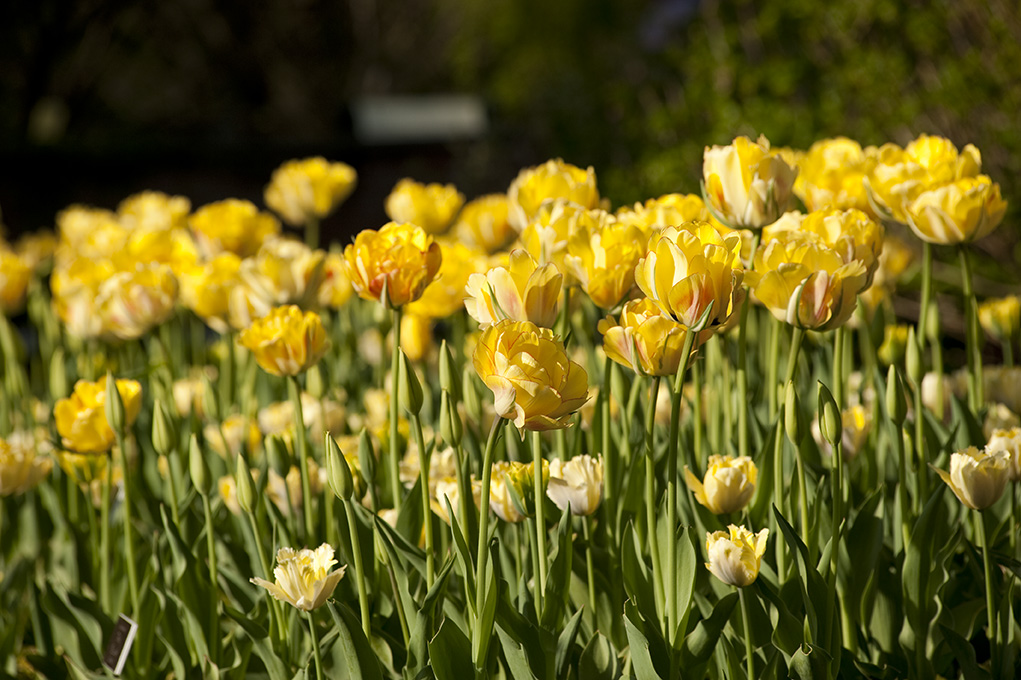