Traditional Shelters, Cyclone Houses, and the Temptations of Modern Construction

Posted in From the Field on September 18, 2018 by Science Talk

In Port-Vila and Luganville—Vanuatu’s two largest cities—most people live in buildings that are made in much the same way as those found in New York, Paris, or Sydney. But across most of Vanuatu, the great majority of people still live in small villages, and it is in these areas that we see the wisdom of traditional approaches to building houses. The advantages of these techniques—and the potential lessons for other areas that suffer increasingly from severe tropical weather—may be especially timely in light of Hurricane Florence, which has buffeted North and South Carolina with high winds and heavy rains.

Two basic differences distinguish house construction in most of the world’s modern towns and cities from the methods used in the traditional villages of Vanuatu and throughout the South Pacific. First, modern homes are generally designed as a single building, with separate rooms for sleeping, cooking, eating, bathing, and relaxing. By contrast, in Vanuatu’s villages, most people construct separate structures for the various activities of their lives. One is used for sleeping, but another is built at some distance to serve as the kitchen, which helps to keep the sleeping quarters cool and free from vermin. Bathing and toilet facilities are located in more secluded parts of the village, to ensure privacy. Each of these structures tend to be small, even cramped by modern standards, largely because people spend the greater part of their days outdoors, whether working in their gardens, performing kastom (customary) activities in public areas, or relaxing in the shade of a coconut tree.

A second major distinction deals with the methods and materials used. Modern houses are envisioned as permanent structures, but traditional housing is viewed as more ephemeral, lasting only for five or ten years, or may even be built for a single season or event, such as the visit of family members. Its construction relies entirely on plant materials that are locally available, most of which can be collected at no cost from family-owned forests. These natural products are subject to more rapid decay, and therefore must be routinely replaced or rebuilt. At the same time, they combine the many advantages of natural materials, including both refuge from torrential rain and a cooling shade from the sun.

Despite the benefits of traditional approaches, modern methods and materials are making inroads across many of Vanuatu’s rural villages. The durability and ease of construction are tempting advantages, and even the status of living in a concrete house can sometimes outweigh the benefits of using natural materials. The consequences of this trend were illustrated vividly on the island of Tanna during the crisis triggered by Cyclone Pam, Vanuatu’s worst severe weather event in recorded history, which struck the county’s southern islands on March 13, 2015, killing between 12 and 16 people. 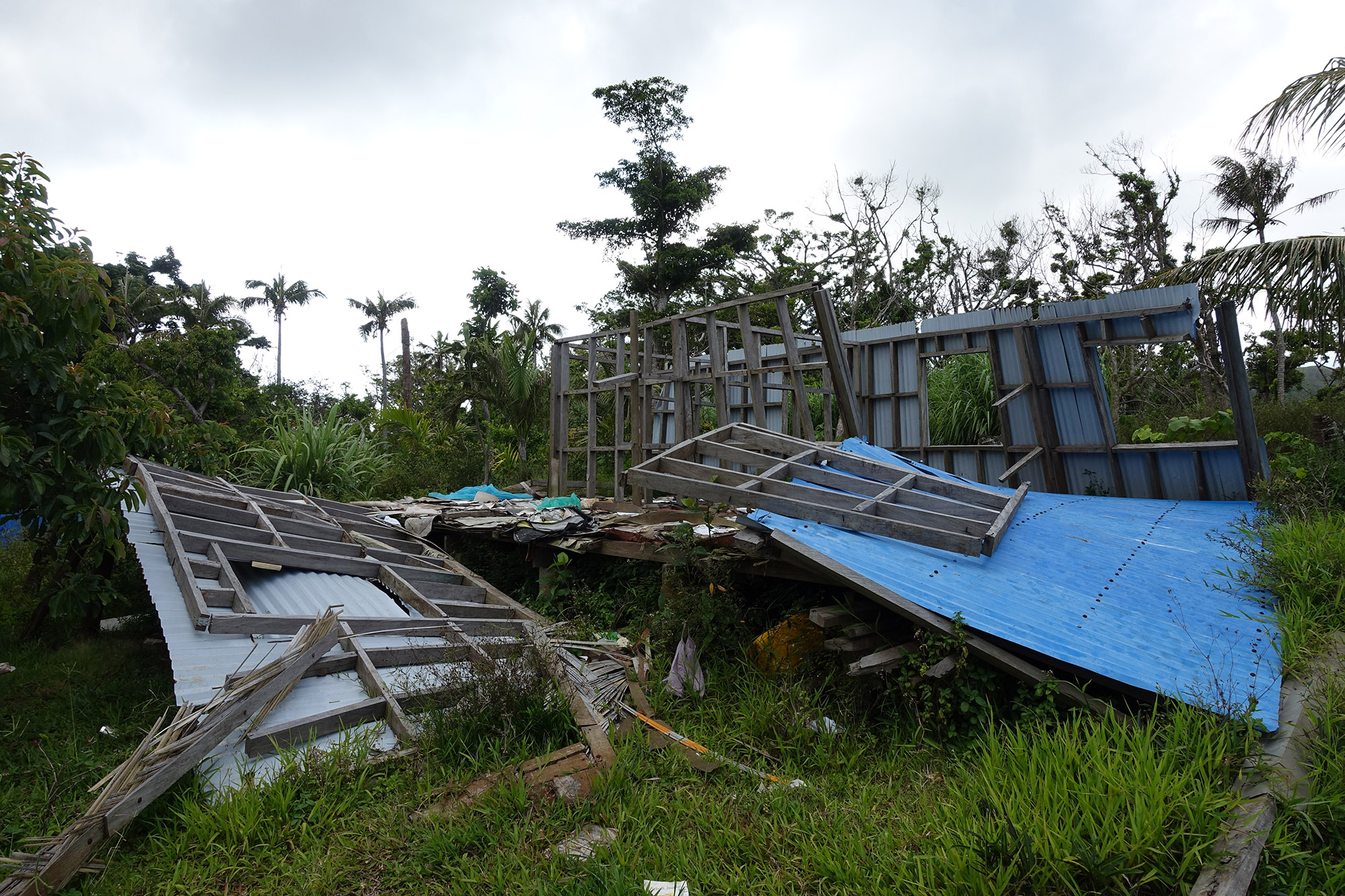 Collapse of a building made with modern construction materials, caused by Cyclone Pam (Nusemetu, North Tanna).

The Plants and People of Vanuatu project, a collaboration initiated in 2013 between the Vanuatu Department of Forestry, the Tafea Kaljoral Senta, and the New York Botanical Garden, has been documenting the native and introduced plants in southern Vanuatu, along with their indigenous names and traditional uses. During our work on Tanna in June 2014, we came across a particular style of house in the village of Yenhup, which our local hosts, Samuel Harwaen, David Kapwia, and Alexis Tupun, called a cyclone house (or “saeklon haos” in Bislama, the local language). This particular structure was the only cyclone house we had documented until that time. Our hosts informed us that several other cyclone houses could be found across Tanna, but that such buildings were no longer important because modern concrete houses with metal roofs were stronger and safer refuges during times of severe storms.

As the late Chief Jacob Kapere pointed out, however, all of the deaths caused by Cyclone Pam were associated with modern housing materials, and no loss of life occurred to anyone who sheltered in a traditional house. This fact did not pass unnoticed by the villagers of Tanna. In fact, during our first visit after the cyclone, we saw dozens of new cyclone houses being built across all areas of the island, providing us with an opportunity to document the methods and plant materials used.

The basic form is an A-frame building whose triangular shape provides amazing structural strength and stability. Moreover, the rafters of the roof extend not merely to the ground, but are buried into the soil up to one meter deep. In coastal areas, the ubiquitous beach hibiscus (Hibiscus tileaceus), known as “burao” in Bislama, is used because the wood of this tree is resistant to rot and naturally arched. Burao trees are not found in the interior of the islands, so people who live in inland villages use a different plant, known as “kerosin wud” in Bislama (Fagraea berteroana). Kerosin wud is an epiphytic tree that grows on the branches of other large forest trees, and while it is unrelated to burao, its main trunks have a similar arched shape and rot-resistant properties.

In the northern islands of Vanuatu, the durable leaves of the “natangura” palm (Metroxylon warbugii) are the most important material for roof thatching, but this tree is not native to the southern islands, where people traditionally used a grass called wild cane (“waelken” in Bislama, Miscanthus sinensis). In Tanna, waelken is often used in combination with native palm leaves (especially those from coconut trees), which are tied to stretchers made from the saplings or small branches of several tree species. Leaves of Alpinia oceanica, a ginger relative called “wael ginga” in Bislama are sometimes placed at the top of the roof to help seal the ridgeline against the rain.

There are two other important elements in the construction of cyclone houses. First, the end walls are not constructed from flattened bamboo, as in most traditional houses in Vanuatu. Instead, the waelken used on the roof is employed. The loose leaves of this grass are removed, and the stems or culms of the plant are tied up to form a thin, flat wall. The loose leaves are twisted to form a braid, and then the individual braids are attached to the wall to give it greater depth, creating a structure that is both strong and highly flexible, enabling it to withstand hurricane-force winds without breaking. By contrast, solid concrete-block walls act as sails that can come crashing down on their inhabitants.

The final critical design element of a cyclone house is the use of lashings to hold all the parts of the house together. In Vanuatu, people traditionally used vines or lianas and have a wide selection of species from which to choose. These wild “ropes” are first harvested from the forest, then brought to the area of the village where the cyclone house is being built. Depending on the species, the outer layer or “skin” of the vine may be removed. The stems are then heated over a fire, which softens them, making them pliable and easier to bend. While they are still hot, the vines are used to lash the various elements of the house together. As they cool in place, they tighten. This approach provides incredibly strong connections between the components of the structure but with sufficient flexibility to prevent the house from breaking apart in the face of strong winds. This method is far superior to the use of nails and screws, which can be easily pulled out by cyclonic forces, allowing metal sheets to tear away from roofs, and walls from their foundations.

The renaissance in cyclone-house construction has provided several important lessons. First, local people value their forests and other natural resources and are more likely to conserve them when they know that their lives and livelihoods depend on them. Another important lesson is the frightening potential for the loss of traditional knowledge. As we interviewed local people about cyclone houses, we learned that only the oldest members of the communities—the generation of the grandparents—remembered how to build these important structures. In most areas, the knowledge of which plant species to use and how to use them had not been passed on to their adult children and grandchildren. Within another decade or two, the knowledge associated with cyclone-house construction, developed over so many centuries, could have been lost forever. After the storm, with the renewed understanding of the importance and wisdom of traditional houses, we saw evidence of the transfer of this knowledge to younger generations across all parts of Tanna and Aneityum. Thus, despite the great suffering caused by Cyclone Pam, there were some unforeseen “silver linings,” and the preservation of traditional knowledge is high on that list.

Drs. Balick and Plunkett are grateful to the Christensen Fund, The Critical Ecosystem Partnership Fund, The National Geographic Society, and The National Science Foundation for their generous support of our ongoing work in Vanuatu as well as to the people of Vanuatu for their partnership in this work.

This post is based on an article by the authors that was published in Island Life magazine. You can read earlier posts about Vanuatu’s “message plants” and “calendar plants” here and here.