In Search of Fumewort at Garth Woods, We Found Something Better

On a steamy day in late May, a crew of invasive species scouts assembled in the parking lot of the Garth Woods Apartments in Scarsdale, Westchester County. Our mission? To survey Garth Woods, a sliver of intact riparian forest, for Corydalis incisa, also called incised fumewort or purple keman. Much to our excitement, this case of sleuthing had a happy ending: for now, Garth Woods shows no sign of C. incisa, and full to the brim with uncommon native herbs that were a joy to see.

C. incisa, which is native to Asia, is an emerging invasive along the Bronx River; it was first recorded in the New York metropolitan region during the Bronx Park BioBlitz in 2005, and has subsequently been observed along the riverbanks of the Bronx River in The New York Botanical Garden and in several sites in Westchester County.

Posted in Interesting Plant Stories on November 20, 2015 by Science Talk

Mari A. Roberts is a Volunteer Coordinator at The New York Botanical Garden’s William and Lynda Steere Herbarium. Her work focuses on engaging citizen scientists in the digitization of plant specimens. 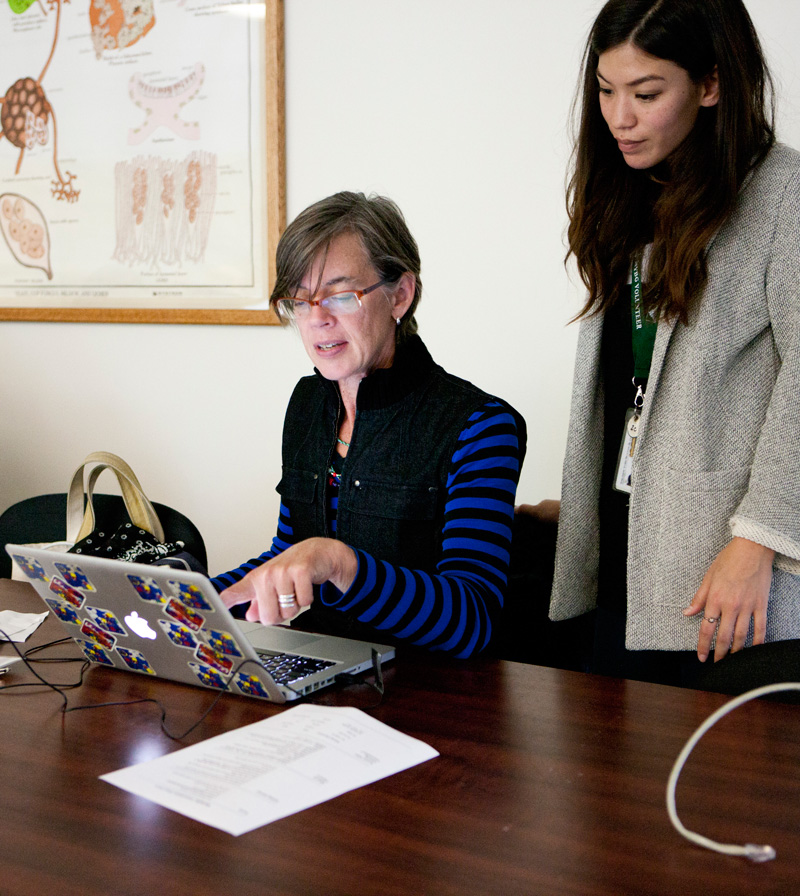 Did you know that you can volunteer on a global initiative right here at The New York Botanical Garden? That’s what happened last month when 15 volunteers participated in the Worldwide Engagement for Digitizing Biocollections (WeDigBio), making information on biodiversity collections—such as pressed plants, pinned insects, and aquatic species in jars—available online.

WeDigBio was a one-of-a-kind event engaging hundreds of volunteers to transcribe specimens at more than 30 institutions via multiple transcription platforms (DigiVol, Hebaria @ Home, Les Herbonautes, Notes from Nature, Smithsonian Institution’s Transcription Center and Symbiota). One goal of WeDigBio was to increase awareness of the importance of biodiversity collections and of making them easily available online to researchers worldwide. Thanks to WeDigBio volunteers at The New York Botanical Garden, The National Museum of Natural History, Australian Museum, Florida State University and dozens of other institutions, data on more than 31,000 biological specimens will be available for researchers, graduate students and even citizen scientists!

Biodiversity collections held in universities, natural history museums and herbaria are physical representations of our planet’s life forms and biological processes. Plant specimens are collected in the field and then stored in a herbarium, where they can remain for hundreds of years. However, collections are not easily accessible to the general public, nor are there digital representations of every specimen.

“Never has it been more important for museums to open their specimen cabinet doors to the public,” says Austin Mast, a WeDigBio organizer and Associate Professor of Biological Science at Florida State University. “Everyone should have the chance to see the rich textures of life on Earth in these collections. Public participation of this sort helps science bring those rich textures into sharper focus.”

The William and Lynda Steere Herbarium at the Botanical Garden is one of 3,400 herbaria in the world and holds 7.8 million specimens that are used by Garden scientists and visiting researchers. To digitize our collections—that is, cataloging them, imaging specimens, and transcribing specimen information—staff and volunteers work on multi-institutional grant-funded projects to target specific areas of the Steere Herbarium’s collections.

For WeDigBio, Garden volunteers captured information about the historical who, what, when, and where of 500 specimens of bryophytes (mosses and their relatives). Bryophytes are model organisms for documenting environmental change because they take up atmospheric nutrients in their environment. By studying these sensitive indicators in historic and recent collections, scientists can address research questions concerning the change in species distributions after man-made environmental events such as climate change, air pollution, and habitat destruction. 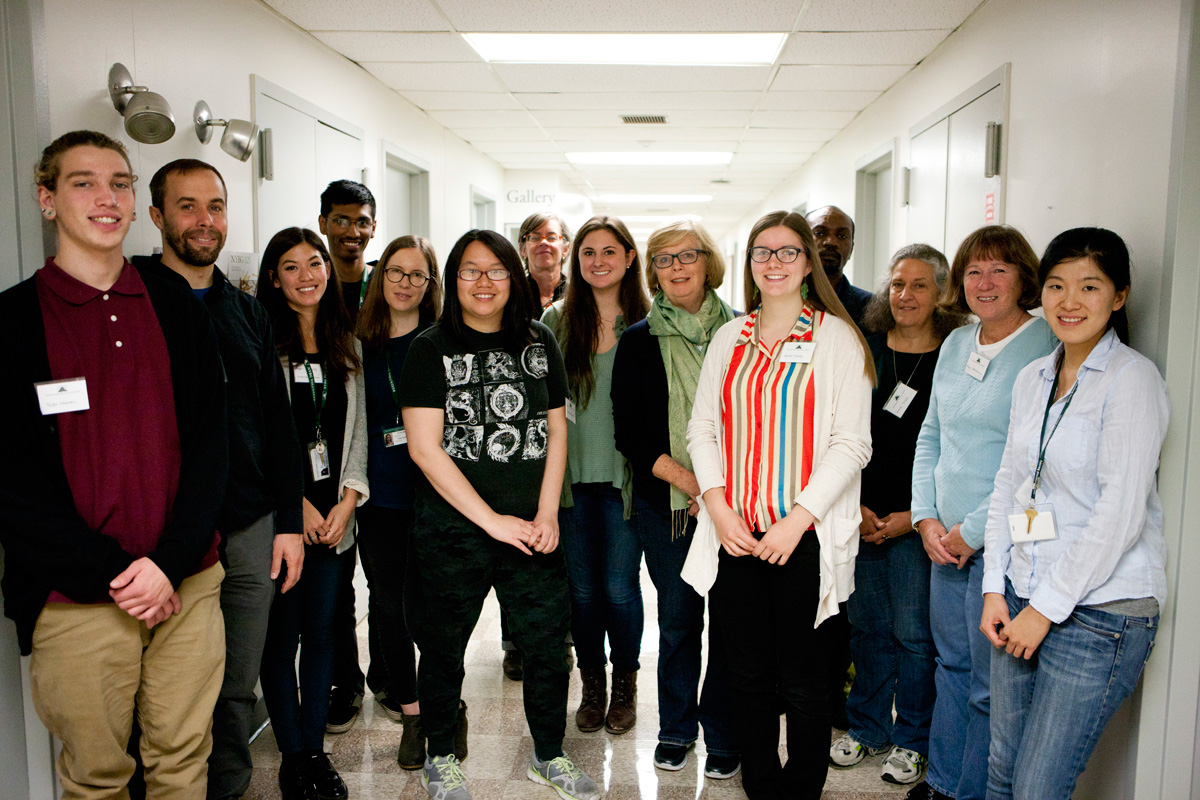 Interested in volunteering? You don’t have to wait until WeDigBio 2016! There are opportunities in the Steere Herbarium year round. Help us discover vital information in our rich collection of plant specimens and contribute to our cause of preserving biodiversity.

For volunteer opportunities in the Herbarium, contact Mari Roberts at mroberts@nybg.org.

Posted in Interesting Plant Stories on October 23, 2015 by Science Talk

Jessica L. Allen is a graduate student in the Commodore Matthew Perry Graduate Studies Program, and James C. Lendemer, Ph.D., is an Assistant Curator in the Institute of Systematic Botany, both at The New York Botanical Garden. Lichens are their primary research interest.

In April, two species of lichens made their way from the Rutgers Field Station in New Jersey to the Thain Family Forest here at The New York Botanical Garden. You might be wondering how they are faring six months later. We took a walk into the forest recently to check in on them.

They’re still alive! A number of them, however, have mysteriously disappeared.

The old man’s beard (Usnea strigosa) hanging on the branches are healthier than those that were attached directly to the trunk of the tree. The reindeer lichen (Cladonia subtenuis) that were nestled deeply into the leaf litter are healthiest, though animals disturbed some of these lichens and they are now fragmented across the ground. About 20 percent of the transplanted lichens are nowhere to be seen. They were likely taken by birds and squirrels living in the forest to be added to their nests.

Posted in Interesting Plant Stories on August 11, 2015 by Science Talk

Jessica L. Allen is a graduate student in the Commodore Matthew Perry Graduate Studies Program, and James C. Lendemer, Ph.D., is an Assistant Curator at the Institute of Systematic Botany, both at The New York Botanical Garden. Lichens, which include a fungal component, are their primary research interest.

Every day, thousands of fungal species throughout the United States perform essential jobs all around us for free. They are vast networks, above and below ground, that facilitate nutrient transportation, form soil, provide natural fertilizers, and add delightful variety to our diets. If fungi went on strike, everybody would notice.

In the United States approximately 10 percent of fish and mammals are protected by the Endangered Species Act, including such American icons as the bald eagle and the American paddlefish. Yet fungi, which constitute an entire kingdom in the scientific classification of species, are effectively excluded from the dialogue. Of the nearly 40,000 known fungal species in North America, only two are protected by the Endangered Species Act!

Is it because we know so little Are there no threats to fungi? Are fungi immune to the threats posed to plants and animals? As is outlined in a recent issue of Endangered Species Research, the answer to all of these questions is a definite “No.”

Honoring a Musical Legend of the Southern Appalachians

Posted in New Plant Discoveries on May 27, 2015 by Science Talk

Jessica L. Allen is a graduate student in the Commodore Mathew Perry Graduate Studies Program, and James C. Lendemer, Ph.D., is an Assistant Curator at the Institute of Systematic Botany, both at The New York Botanical Garden. Lichens are their primary research interest.

Atop Hangover Mountain in the Unicoi Mountains along the North Carolina-Tennessee border, we recently discovered a population of lichens that were in fruit and were excited to realize that they were a new species. Another native gem had been added to the flora of North America.

But what to name the new species?  As we contemplated that question, we sat down to eat our lunch and take in the sweeping views of the nearby Smokies.

When most people think of native plants and animals, images of familiar flowers and songbirds probably come to mind. But largely overlooked are the thousands of lichen species that make their homes in our own backyards. Lichens are fungi that have evolved unique relationships with algae for the purpose of obtaining nutrition.

Indeed fungi that have adopted this lifestyle play crucial roles in keeping our natural landscapes healthy. They also form spectacular growths on trees, rocks and soil from the highest mountains to the lowest and harshest deserts. Scientists at The New York Botanical Garden have discovered new species of lichens throughout eastern North America steadily over the last 50 years, with no end in sight.

Posted in Interesting Plant Stories on April 30, 2015 by Science Talk

Jessica L. Allen is a graduate student at the Commodore Mathew Perry Graduate Studies Program, and James C. Lendemer, Ph.D., is an Assistant Curator at the Institute of Systematic Botany, both at The New York Botanical Garden. Lichens are their primary research interest.

Most trees and rocks in New York City look naked, while trees in wilder parts of the United States wear a vibrant, colorful coat. What causes that? It’s because after centuries of changes to the environment, many lichens have been pushed from our urban or suburban landscapes and into the wilderness.

Lichens are fungi that, in addition to forming beautiful mosaics on trees and rocks, are critical to maintaining healthy environments. Unfortunately they are also extremely sensitive to air pollution and disturbance. That is why if you grew up in New York, and many other cities, you might think that bare trees and rocks are normal.

The good news is that, like the oysters that are slowly returning to New York harbor, there are more lichens in New York City now than there were 30 years ago. Yet there are still hundreds of species that were once found in the metropolitan area and are no longer here. We decided to investigate whether or not more lichens could survive in the city if we just gave them a little help getting here.