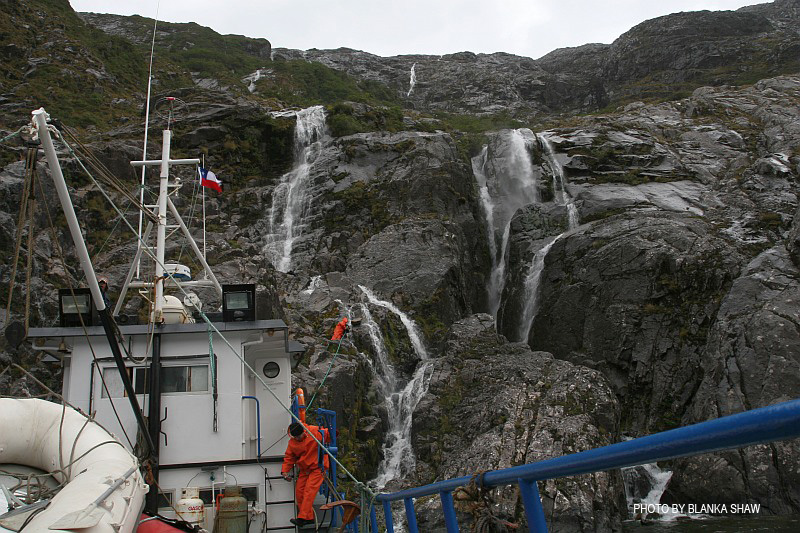 Although I am writing this blog daily, it is often impossible to send it. We were told that the modem that we rented would work anywhere, but in reality it needs a clear view to the north. Often times, though, our ship is anchored in a sheltered area with tall, snow-capped mountains on most sides of us. With the severe and changeable weather here, the saying “any port in a storm” takes on extra meaning! So, I continue to write and send them out whenever the modem decides it is in the mood.

Early this morning (5 a.m.) the captain moved the ship from our previous site to the sound directly west. When I awoke to the engine starting, I knew it would be 3-4 hours before we reached our next site, and that we could sleep in for awhile. Maybe an hour later it became obvious that we had left the protected sound for more open waters. The ship started rocking violently. For most of us, it was like rocking a baby in a cradle and put us back to sleep. Only one person felt a little queasy and had to take something for seasickness. Fortunately, so far, no one has actually gotten sick. In my previous trip to the region, on our second day our, we hit a large storm which crashed 12 foot waves over the ship for hours on end. As our bunkroom was transformed into a vomitorium, I was the only non-crew member who didn’t get sick. Since our bunkroom on this trip has minimal ventilation at best, it is a true blessing that this time no one has gotten sick.

It was immediately obvious when we entered the next sound, suddenly the waters were much calmer. At about 8:30 a.m., the ship stopped. I assumed that meant we were at our next site. Such was not the case. Rather, we were taking on  fresh water. To do this, the ship will pull up to a waterfall and one of the crew scrambles up the cliff face with a plastic bucket that is outfitted with a hose coming out of the bottom of it. The bucket goes into the waterfall and the end of the hose is placed into the hatch of the water tank, on top of the ship. We are in a totally uninhabited place, one that gets around 12 feet of rain a year, much of which at higher elevations falls as snow. So even in mid-summer, given that there are no large mammals to pollute it, the snow-melt water is pure and cold, which is good because it is the only fresh water we have. After watching the crew member (José) go up the cliff face like a monkey, I told him now we just need to teach him to collect mosses!

Not long after we replenished our fresh water supply, we arrived at the south end of the sound. Once again the landscape is spectacular. Southern beech forests come right down to the sea and are developed even on very steep slopes in only slightly sheltered places where a bit more soil accumulates. It is amazing to realize that what we are seeing has gone unchanged, except for climatic variation, for hundreds, if not thousands of years. There is virtually no man-made impact in the region, and we do our best to make sure we leave behind only divots where we have collected our specimens. Who knows how many decades it will take these small blemishes to regrow. All growth here is slow due to the cool temperatures. 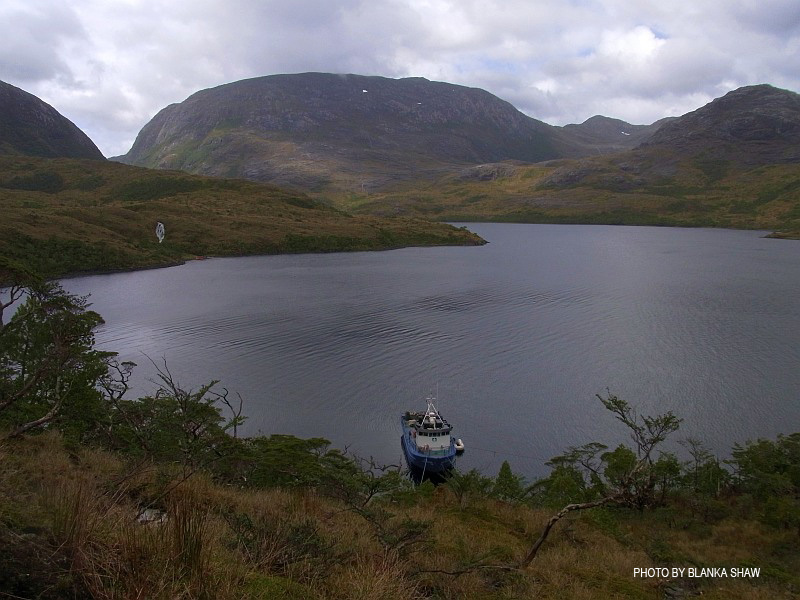 Again today we split up, with Jim and Blanka choosing to go up the slope immediately next to where we were anchored. Juan and I chose to go around the end of the sound to an area where two waterfalls merge near the sea. After our ablutions (didn’t I mention our toilet malfunctioned on the first day?), Juan and I split up. Juan headed to higher elevations where snow not only persists, but is added to with each new storm, while I stayed at a lower elevation and worked along a small, raging stream coming down from a lake. Often I would stop along the stream, lay on the wet ground next to it (is it any wonder I get so wet in the field?!), and reach my hand down into the water, feeling along the bottom for submerged mosses. Some of my most interesting collections have come from doing this. Collecting in this fashion can be slow, but it is important to not get just numerous collections, but also interesting collections. And, with four pairs of eyes in different sites, we are hoping to get as much of the local bryodiversity as possible.

Much to our delight, the plant dryers that we built seem to be working. However, we’re collecting faster than the dryers can work, and so we have to rotate the collections regularly. At this stage we’re still finding species new for the flora as well as new for science. But most are known from the region. However, their distribution in the region is not at all known and so it is important to collect the common species as well as the rare ones. The weather today was the best we have seen so far. We actually saw the sun from time to time, as it alternated with light rain, sometimes repeating the pattern every couple of minutes. This is hardly what most people would think of as good weather, but we do!

We are scheduled to stay in this sound for two days before starting back toward Punta Arenas. We will stop at Seno Agostini on the way back because this is the site of Mt. Buckland. This peak is just north of our flora region, but it is the site where a moss was collected in the 1940s (Bucklandia bartramii, named for the peak) but not found since. Since this species is in the genus that Juan is working on for his doctoral dissertation, and he would love fresh material for DNA studies, we are happy to oblige. We are heading back to Punta Arenas to pick up our colleague from The Field Museum in Chicago, Matt von Konrat, who was delayed and couldn’t arrive when the rest of us did. It will also give us a chance to bathe and get clothes washed before heading out again.

Bill;
These are marvelous reports! We enjoy each one immensely. Keep them coming! Blanka’s photos are wonderful also. You seem to be having the time of your life! Blanka, too, seems to have everything she needs in life except for Jon and Limburger cheese! Keep well; and bring home a bit of everything that isn’t glued down!

We need photos of the drowned rat bryologists…

(yes! the reports and photos are fabulous!)

Very interesting reports. Looking forward especially to seeing the Andreaea collections you bring back. I have only seen old, scant material from Mt. Buckland, for example, so fresh material showing variability, which is puzzling in the limited material I have seen, will be valuable . Look forward to hearing more about your adventures and daily life there.