Discovery of a Spectacular Tree

Scott A. Mori has been studying New World rain forests for The New York Botanical Garden for 38 years. His most recent book is Tropical Plant Collecting: From the Field to the Internet.

As mentioned in previous posts, my main research focus is the classification and ecology of the Brazil nut family (Lecythidaceae) in the New World tropics. The Brazil nut–the largest nut in a can of mixed nuts, for reference–and the cannon ball tree are the best known plants of this family, the former for its economic importance and the latter as an ornamental tree in tropical botanical gardens. Because I have been studying this group of plants for nearly 50 years, many people are surprised when they learn that there are still new species to be discovered.

For many years I had known of a large-leaved species of the Brazil nut family that had been collected in southwestern Colombia, but I was not able to identify the species; the few available collections were poorly prepared and the collection area was not safe for botanists to visit. Therefore, when I was invited to give a lecture at the fifth Colombian Botanical Congress in April of 2009, in San Juan de Pasto, I immediately accepted the invitation–this was relatively close to where the mystery plant grows and, more importantly, it was then safe to travel there. Coincidentally, the congress field trip was to the Reserva Natural Río Ñambí, a beautiful private cloud forest reserve known for the 29 species of hummingbirds found there, as well as for its spectacular plants, many of them epiphytes covering the trees. One of those trees happened to be the very plant that I had my eyes on for so many years!

Fifteen minutes after entering the reserve, one of the students ran to me holding out a red flower in her hand and exclaiming enthusiastically that it was the species I was looking for. The flower color momentarily confused me because other species in Grias, the genus I knew it belonged to, have either white or yellow petals. I responded that it was “not even a member of the Brazil nut family,” but immediately after the statement left my mouth, I timidly realized that it was. Needless to say, this error greatly amused the students. 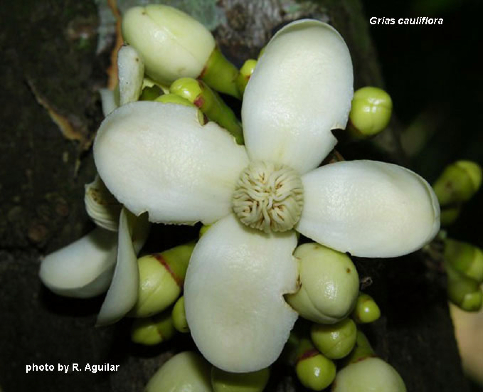 ◄ Back
Next ►
Picture 1 of 7
A white flower of Grias cauliflora.

In addition to having reddish-purple flowers, the staminal tube has two very distinct chambers and the anthers possess apiculate apices that are not present in the other species. My colleagues and I have hypothesized that other species of the genus are most likely pollinated by bees (the diurnal, yellow-flowered ones) and beetles (the nocturnal, white-flowered ones), but no observations have been made to test this hypothesis. In contrast, the new species appears to be pollinated by bats–an idea based on the nocturnal flowers, the red color (not all bat-pollinated plants have white flowers), large flowers, the large nectar chamber, and claw marks on the petals. As you can see, the pollination biology has not been scientifically documented for any of the species of Grias, so even though there are many more species to be discovered, there are even more ecological relationships to be unraveled!

Several students showed so much interest in this species that they worked with me to make the herbarium specimens and to write the description of the species, even before we left the field station the next day. We named the new species Grias purpuripetala based on the purple color of the petals. If you do not believe that this is a new species, see the attached slide show of this species, and two species representative of the other species of Grias.

This gorgeous new species is only found in the Ñambí Reserve and the forests surrounding it, and we hope that the presence of this rare plant, not to mention the area’s famed hummingbirds, will be cited along with many other reasons for keeping this reserve in a pristine state.

Now that is a cool natural history story!

amazing to know the history behind this plants. Would love to ask a simple question that whether its fruit is edible?