The Diary of H.H. Rusby: Slowly Down the Mountain

Posted in Science on July 6 2013, by Anthony Kirchgessner 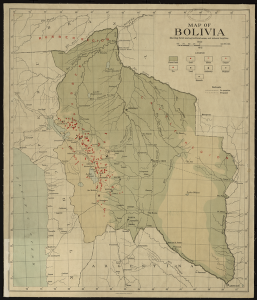 Rusby, his health still failing, is calm and collected when confronted by bandits. But efforts to get to a lower, warmer altitude are proving difficult. Additionally, the expedition supplies arrive but with a heavy price tag.

In between the struggles of securing mules for the trip out of the mountains, paying for a botched shipping job, and battling the effects of dysentery, Rusby manages a few moments to sample the local flora, hopeful of the arrival of proper drying equipment.

Last night was not only most uncomfortable, owing to the cold, but I became anxious about my poor lung condition. It was a great relief when morning and sunshine appeared, yet I felt very bad and a little discouraged as to my future. After breakfast, with strong coffee and a little strychnine, I felt somewhat better, but the slightest physical effort caused me to gasp severely for breath.

The Diary of H.H. Rusby: The Bolivian Climb

Posted in Around the Garden, Science on June 29 2013, by Anthony Kirchgessner

Altitude and cold weather continue to plague Rusby, who decides to travel ahead to warmer climes, but must pass through even higher and colder mountains to do so. He is helped along the way by the Guggenheim mining company, providing him with many comforts in the inhospitable mountains. But the survival of the expedition is in jeopardy, as the supplies have not yet arrived.

This has been a very important day for us. I rose after a night of much discomfort from my cold and remained in the house all day. I wrote a long letter home and partially straightened out my accounts and brought my journal up to date. We have today made our final arrangements about our journey from here to the Boopi, and it appears that there are some unpleasant complications which will render this transaction less favorable than we had anticipated. Mr. MacCreagh had virtually committed himself to send our cargo by a contractor over a different route than the favorable one provided by the Guggenheim Company. It now transpires that we must carry out this arrangement, sending most of our freight directly by mule to Canamina, at a cost of about $3.50 American money per hundred pounds, and going ourselves with a small outfit by way of Eucalyptus and Pongo.

The freight did not arrive in time for any work at repacking today.

The Diary of H.H. Rusby: Short of Breath and Skirting Death

Posted in Science on June 22 2013, by Anthony Kirchgessner

As Rusby and his expedition move deeper into Peru and Bolivia, the daily trials of traveling abroad mingle with fleeting moments for discovery along the way. Rusby’s fascination for all things scientific leads him to the Arequipa Hospital, where he examines ulcer patients, before taking the railroad into the mountains toward Juliaca. In between snatching up passing flowers from a train railing, struggling with altitude sickness, and sleeping through a near-death experience on the steamship, he finds time to identify the local flora, along with fruits and vegetables in city markets.

I made a number of purchases of things which will be needed on our expedition. I went to the market and purchased a number of samples of vegetable products and also three pairs of fully dressed figures of Quichua indians, each accompanied, the age of the later varying from infancy to eight or nine years. In the afternoon I secured an automobile and went down to Tiavaya, where the market gardens were located, charging this expense to the Botanical Garden. Here I found growing the fruiting plants of a pepino, having oblong fruits, wholly of a deep purple color like the eggplant. I also found and obtained specimens of a species of Tasconia, which yields an edible fruit sold in the market under the name of “Tumbo“; of a plant yielding another edible fruit, sold in the market under the name of “Acchocta”; of the rhacache, a delicious turnip-shaped root belonging to the parsley family, a species of Arracacia, and some unripe fruits of the Lucuma. In the evening I attended the motion picture exhibit, which was so silly that I left before it was over.

The Diary of H.H. Rusby: Into Peru

Posted in Science on June 15 2013, by Anthony Kirchgessner

Now in week three, Henry Hurd Rusby‘s Mulford Expedition arrives in Peru after passing through the Panama Canal. Anchoring in Callao, several of the expedition’s number travel on to Lima as guests of the Peruvian leadership. Gathering medicines, touring the capital, and meeting with newspaper representatives are the orders of the day, yet the trials of surviving abroad play out even in the relative safety of urban Peru.

Reboarding the Santa Elisa, the expedition steams southeast to Mollendo where the competitive business of hotel porterage and questionable exchange rates preface the expedition’s journey into higher altitudes. There Rusby’s talents as a botanist are finally put to use identifying cacti, mountain trees, and local vegetables on the road to Arequipa.

The Diary of H.H. Rusby: Through the Panama Canal

Posted in From the Library, Science on June 8 2013, by Anthony Kirchgessner

Week two of Henry Hurd Rusby‘s Mulford Expedition sees the Santa Elisa passing through the Panama Canal (see Week One). At the time of this writing, the Canal has been open for less than seven years, and as we read, construction is ongoing. The Canal’s most profound immediate effect is a quicker and safer journey between the Atlantic and Pacific Oceans. A voyage from New York to San Francisco saves over 7,800 miles and the ship avoids navigating the hazardous Drake Passage and Cape Horn.

Dr. Rusby mentions the ceremony of the Court of Neptune, also known as the Line-crossing Ceremony, whereby a commemoration of a sailor’s first crossing of the equator is performed. This ceremony is also performed for passenger’s entertainment aboard civilian ocean liners such as the Santa Elisa. Few details are given by Dr. Rusby, but the ceremony has its colorful characters, including the King of Neptune and Davy Jones.

The Diary of H.H. Rusby: A Botanical Explorer in the Amazon Basin

Posted in From the Library, Science on June 1 2013, by Anthony Kirchgessner

In 1921, when Henry Hurd Rusby was 65 years old, he embarked on his last field trip to South America as the Director of the Mulford Biological Exploration of the Amazon Basin. Professor of Botany and Materia Medica, and Dean of the College of Pharmacy at Columbia University, Rusby had much experience exploring in South America. The goal of the Mulford Biological Expedition was the discovery of  plants with possible pharmaceutical properties.

A complete set of the botanical specimens from this expedition were deposited at The New York Botanical Garden’s Steere Herbarium. Other members of the expedition included Gordon MacCreagh, anthropologist and quartermaster of the expedition, who would later write a rather scathing and sarcastic account of the expedition in his book White Waters and Black; Dr. William M. Mann of the Smithsonian Institution; Dr. Orland Emile White of the Brooklyn Botanical Garden; Dr. Nathan E. Pearson of the University of Indiana; Walter Duval Brown; Frederick Ludwig Hoffman; G. S. McCarty; and Martín Cárdenas, at the time a botany student from Bolivia who would later go on to become Bolivia’s foremost botanist.