The Botany That Inspired the Artist: Discovering Frida Kahlo’s Garden

Posted in Behind the Scenes, Exhibitions on April 30 2015, by Karen Daubmann

Karen Daubmann is NYBG’s AVP for Exhibitions. She has researched, planned, and installed over 50 exhibitions in her seven years at the Garden. 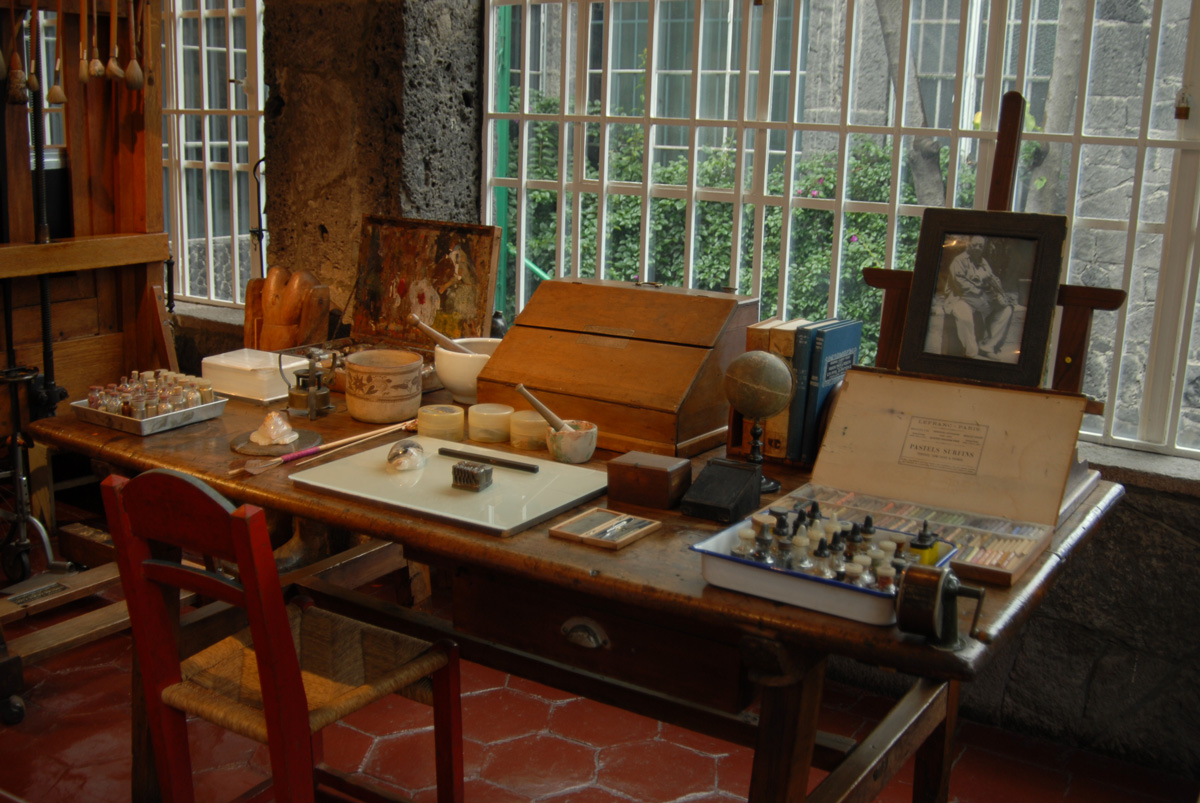 At The New York Botanical Garden, exhibitions are planned over many years with the intent of bringing to life distant lands, influential people, interesting plants, rarely seen gardens, and fantastic landscapes. We immerse ourselves in the study of our subjects with the goal of evoking the gardens and the spirits of their creators within the walls of the Enid A. Haupt Conservatory. In 2010, we transformed the galleries into Emily Dickinson’s Garden, complete with a path “just wide enough for two who love.” In 2012, when we celebrated Claude Monet, we knew the garden we created was one that he was surely enjoying when the glasshouse emptied each evening.

When we began to research Frida Kahlo, we wanted to delve into the story of the woman who has been examined through her pain and suffering and paint her in a different light. We wanted to learn more about the iconic face that is emblazoned on canvases, the strong and fierce-looking dark-haired, dark-eyed woman who used to be known as Diego Rivera’s wife and is now known simply as Frida. The more we researched, the more intrigued we became.

To us, Self-Portrait with Thorn Necklace and Hummingbird was an image of a woman immersed in tropical flora. Her still-life paintings, an important yet lesser-known portion of her work, are informative displays of the rich diversity of Mexico’s plant life. We were fascinated by the incredible detail of Kahlo’s curated life, as evidenced by her paintings, her letters, and archival photos of Kahlo and Rivera in their garden. Her story was ripe to be told by The New York Botanical Garden.

Posted in Exhibitions on May 8 2014, by Karen Daubmann

Karen Daubmann is NYBG’s AVP for Exhibitions. She has researched, planned, and installed over 50 exhibitions in her seven years at the Garden.

The Free Dictionary defines “evocation” as the creation anew through the power of the memory or imagination. In the exhibitions department at The New York Botanical Garden we craft exhibitions years in advance with the intent of bringing to life distant lands, famous people, interesting plants, rarely seen gardens, and fantastical landscapes. Creating evocations is our job, and one that we take great pride in doing.

Not only do we bring the visual (garden composition) to the visitor, we also bring content to enrich their experience—including catalogs, signage, audio tours, plant tours, iPhone apps, related poetry tours, and programming. Our goals are to transport you, to immerse you, to educate you, and maybe, just for a moment, to help you forget about your life outside the Garden gates. Using our upcoming exhibition as an example, Groundbreakers: Great American Gardens and The Women Who Designed Them, I’d like to show you some of the behind the scenes of how we put together the exhibitions.

Starting with an exhibition idea, we begin to plot the idea on our calendar and determine which exhibitions will come before and after it. Initial themes are developed and concepts for the designs are discussed. Early in the process, a scouting mission is planned, so that any physical locations relating to the topic can be photographed and documented. Later, visits to libraries and archives are planned so that assets for the galleries and related collateral can be gathered.

Posted in Exhibitions on August 27 2012, by Karen Daubmann

Ed. Note: While Monet’s Garden continues to enamor thousands of visitors to the NYBG through the fall, we’re always preparing for new and intriguing exhibitions. This includes our latest artistic explorations, which will culminate with a long-awaited unveiling in late September: the renowned sculptures of Manolo Valdés. As our Director of Exhibitions and Seasonal Displays, Karen Daubmann offers an advance glimpse into the artist’s creative process. 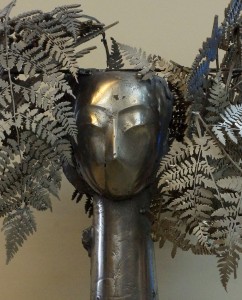 A few of us were lucky enough to have the opportunity to visit the New York studio of artist Manolo Valdés a few weeks back. We were working on a plan for exhibiting his maquettes in the Orchid Rotunda of the Library Building during the course of his exhibition, Manolo Valdés: Monumental Sculpture. Though the exhibit on the grounds opens on September 22, the maquette display will open on November 3.

Maquettes are small-scale models of artworks which help an artist to develop an idea. You can think of it as a rough draft, or a sort of “sketch” of a sculpture, which helps the artist to visualize and test shapes and ideas without incurring the costs and effort necessary to produce the full-sized piece. You can see from the photos below the variety of ways in which Valdés has explored the butterfly motif in his work.

Look Up: The Green Walls of Patrick Blanc

Posted in Exhibitions, People, The Orchid Show on February 24 2012, by Karen Daubmann 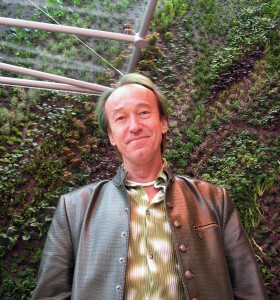 It won’t be long now. Our Caribbean Garden is moving right along, and already preparations have begun for our next exhibition. It’s not a haphazard process that brings us to these moments, either–everything that springs to life in our Conservatory and elsewhere is the product of months (if not years) of careful planning. In the case of this year’s Orchid Show (our tenth!), one man’s lifelong passion will make its mark on the NYBG.

“Eccentric” comes to mind when considering Patrick Blanc. What other adjective sticks so well? Clover-green hair and patent emerald shoes, a matching Aloha shirt and vintage jacket; Patrick’s a walking canvas for his profession. As a renowned botanist, plant hunter, and designer, Blanc makes his mark on the world of landscape design with grandiose ideas of verticality and hanging foliage–not just from baskets or trellises but from the very walls themselves. Gravity is no constraint worth considering for this worldly creative.

The Really Big Three: The Giant Pumpkin Showcase of Champions

Posted in Around the Garden on October 14 2011, by Karen Daubmann 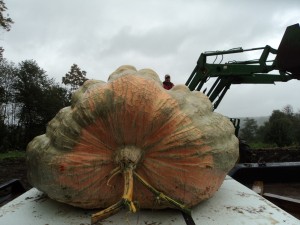 The New York Botanical Garden is proud to announce the Great Pumpkin Commonwealth’s Showcase of Champion’s winners for 2011!

Beginning Friday, October 21 the three largest pumpkins in the United States will be on display in the Garden’s Visitor Center. Come take a look at Dave and Carol Stelts’ 1,807.5 lb pumpkin grown in Edinburgh, PA. Also, be on the lookout for a plane from California bearing a 1,704 lb pumpkin grown by Leonardo Urena as well as the 1,693 lb pumpkin grown by Brant and Eleanor Bordsen.

Here is a look at the standings for all 1,471 entries at the 54 GPC weigh-off locations nationwide.

Come out and take a look at these giant pumpkins beginning Friday, October 21. Mingle with the giant pumpkin growers, tweet us a picture of yourself with the pumpkins, and don’t miss our first carving weekend featuring Ray Villafane on October 22 and 23.

Check out some of these giant gourds as they make their way to the Garden!

Posted in Around the Garden on October 13 2011, by Karen Daubmann 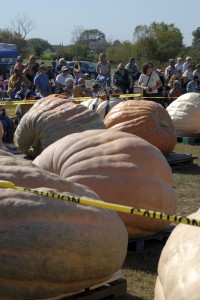 It’s that time of year again, when pumpkins are harvested and brought to county fairs and farm stands to be weighed at one of the Great Pumpkin Commonwealth‘s regional weigh offs.

The Commonwealth’s five U.S. regions host a total of 54 weigh–offs. Anticipation of these weigh-offs has been building at The New York Botanical Garden as we will host the GPC’s Showcase of Champions beginning October 21. The Showcase of Champions,  as part of the Haunted Pumpkin Garden, will feature the three largest pumpkins from the regional weigh-offs. The pumpkins will be on display October 21 – October 30 and will be carved October 22-23 by pumpkin-carving provocateur Ray Villafane, and October 29-30 by creator of the gourd-geous installations in the Haunted Pumpkin Garden, Michael Natiello.

Check out a slideshow of my visit to one of the New England regional pumpkin weigh-offs below!