Posted in Wildlife on March 9 2016, by Patricia Gonzalez

A shy chipmunk is caught unawares on the pre-spring Garden grounds. 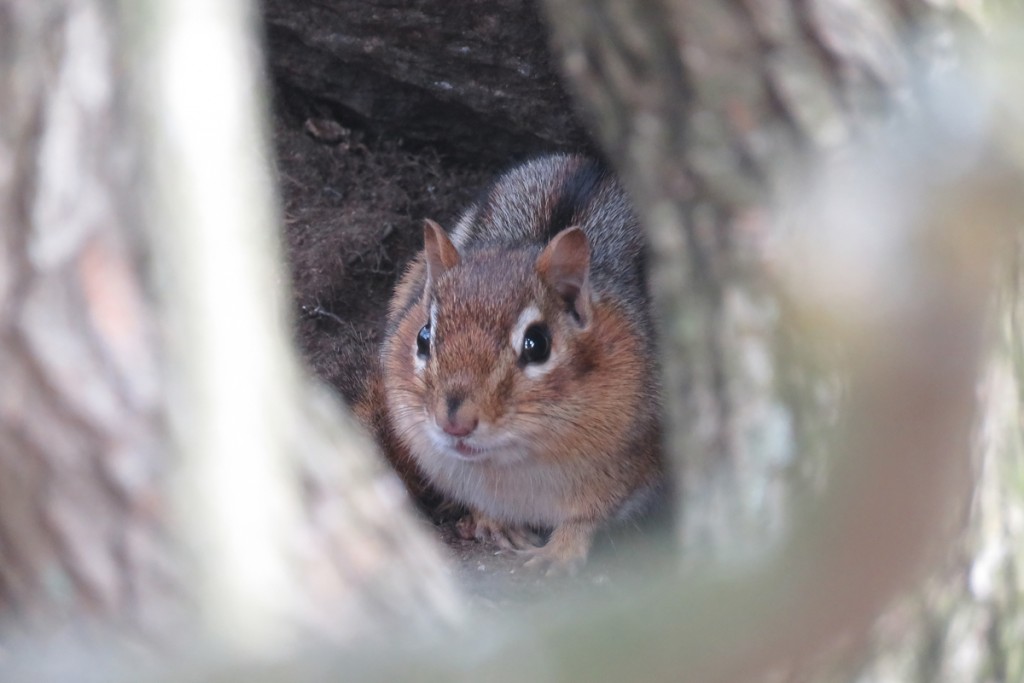 Weekly Wildlife at the Garden: Wading

Posted in Photography on October 28 2015, by Patricia Gonzalez

In Twin Lakes, a stark white egret goes for a wade, contrasting beautifully with the faded leaves along the banks. 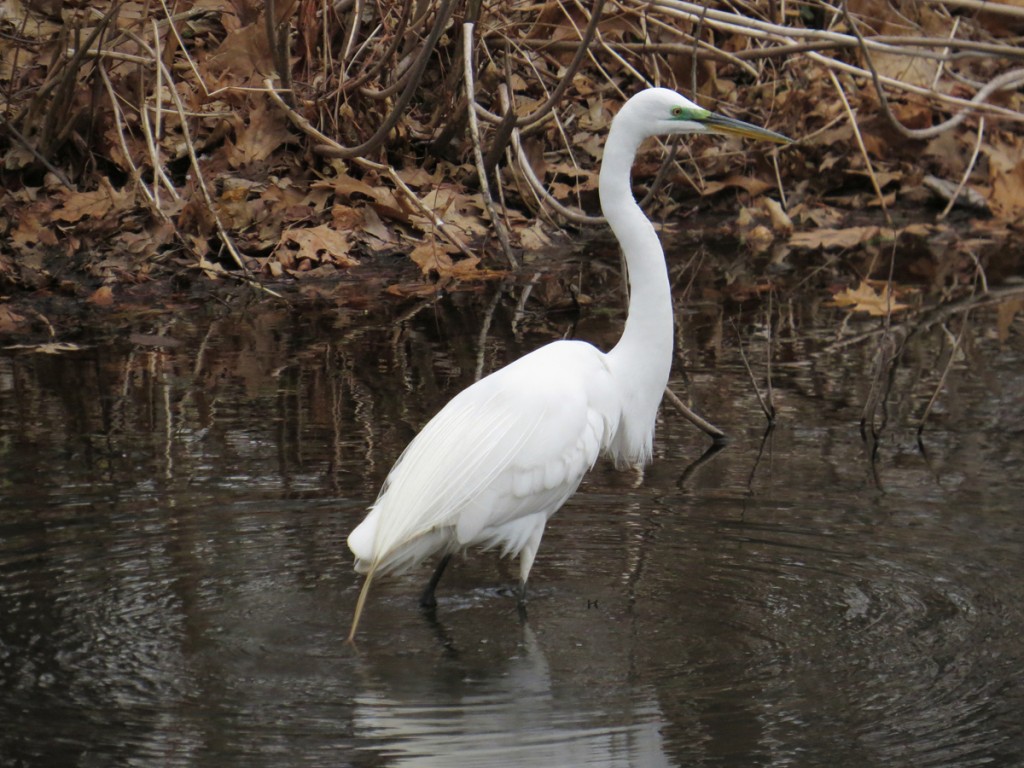 An Egret in Twin Lakes – Photo by Patricia Gonzalez

Posted in Photography on December 23 2014, by Lansing Moore

After the longest night of the year this past weekend, here’s a little reminder that it is always darkest just before the dawn. 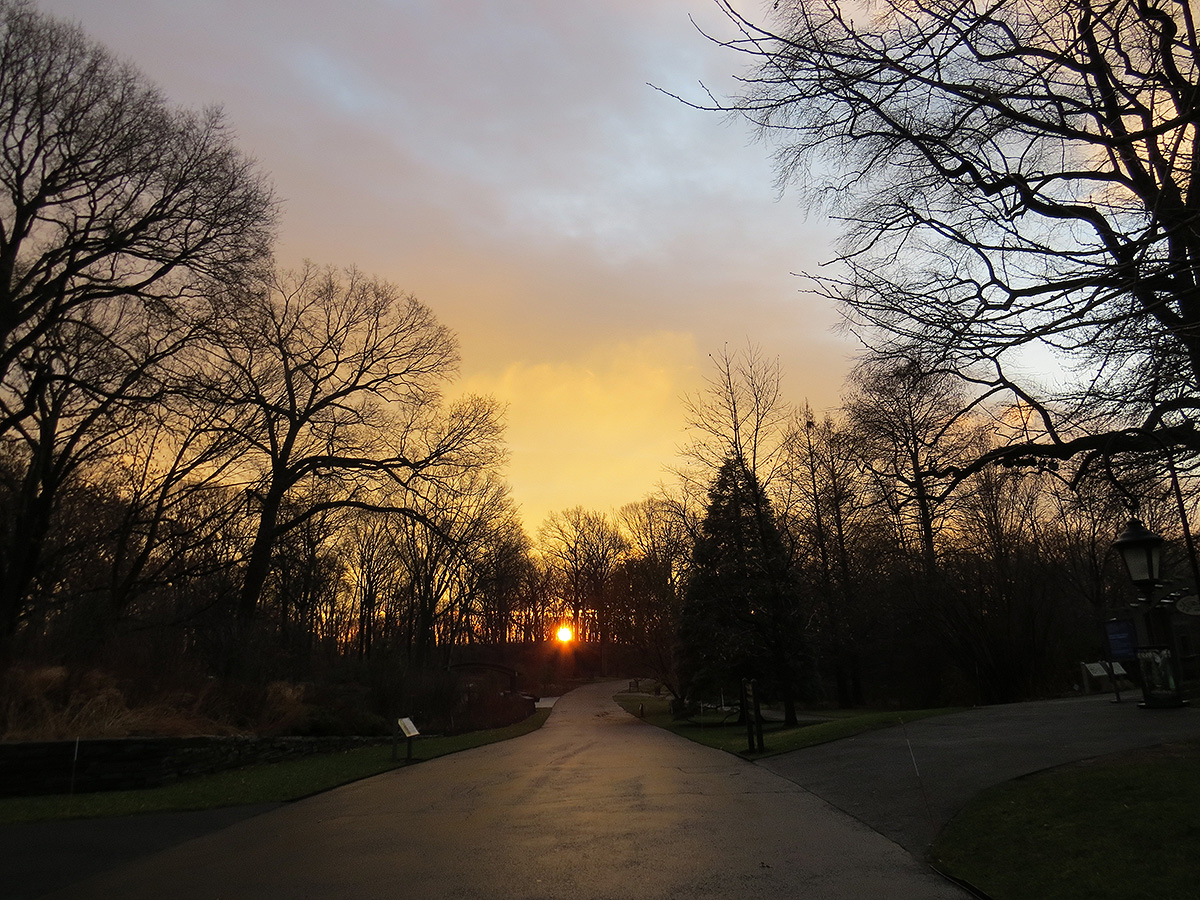 Near the Native Plant Garden – Photo by Patricia Gonzalez

Posted in Wildlife on May 27 2014, by Patricia Gonzalez

I have had the pleasure of taking thousands of photos of wildlife at The New York Botanical Garden since my first treks here in 2008. Among the birds of prey that I enjoy photographing are the Great-horned Owls. My first encounter with these winged hunters was back in March of 2009.

It was a little after 4:00 p.m. as I was walking down Azalea Way that I heard hooting coming from the Forest. I looked through the trees only to be surprised by the outline of an owl. Back then, I was shooting with a small point-and-shoot that had nowhere near the zoom range of my current camera. But it didn’t matter. What was important was that I got to see an amazing member of the animal kingdom for the first time, and I got a photo!

Later that month I spotted the female owl and one of her two hatchlings in the nest, which was located in a snag overlooking a trail near the edge of the Forest. I’ll never forget the day when a fluffy little head popped up and looked right into my camera. It’s still one of my all-time favorite photographs.

Posted in Photography on March 10 2014, by Matt Newman

We’re not actually in Montana. Though, for a moment, one might’ve been fooled. 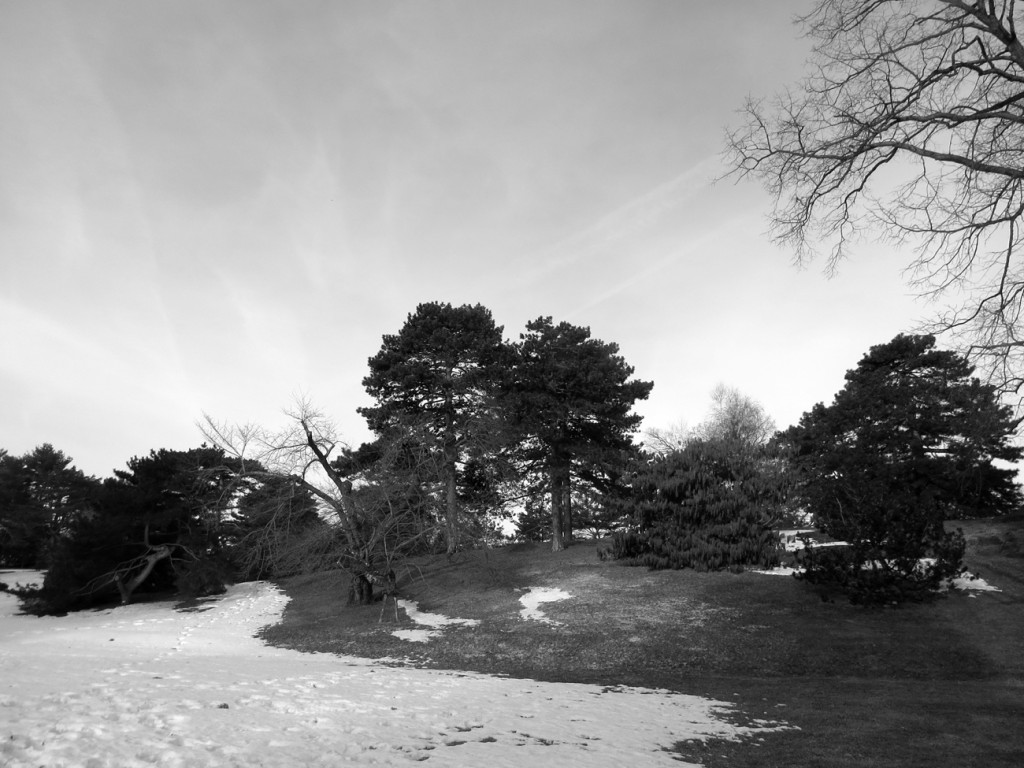 In the Ross Conifer Arboretum – Photo by Patricia Gonzalez

Posted in Around the Garden on November 4 2013, by Matt Newman 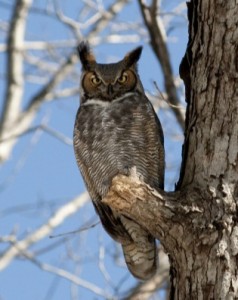 Big, small, fierce, or cute, the birds of prey that live out their lives in the northeast are an uncommon cadre of sharp-eyed hunters, though seldom seen by your average park wanderer. Here in the New York Botanical Garden, our most popular visitors are definitely the Red-tailed Hawks that patrol the skies around our grounds, as well as the occasional Great-horned Owl, but the many local species that you might not always see are equally fascinating! And I admit they’re also pretty adorable if you’re not a squirrel or a chipmunk.

As part of our Fall Forest Weekends events and activities, which kicked off this past weekend and run through the next, our friends from the Theodore Roosevelt Sanctuary & Audubon Center stopped off at the Garden with a few clever companions in tow, among them an American Kestrel, an Eastern Screech Owl, and a Barred Owl—some of which you can see hunting around our grounds if you’re lucky. Many of the birds in the Audubon Center’s care are rescues, brought in to be rehabilitated after sustaining injuries that won’t allow them to survive back in the wild. But they do plenty of good in their downtime, educating people about the importance of raptors for a healthy, diverse ecosystem.

Posted in Around the Garden, Photography on November 2 2013, by Patricia Gonzalez

I shot this on Tuesday, October 30th. As my shift ended early, I decided to take advantage of the daylight and photograph the continuing explosion of fall colors. The Forest is especially wonderful this time of year. Reds, yellows, oranges, and great shades of violet cover its 50 acres. According to the Garden’s fall foliage tracker, we are now about halfway to peak color. And it can only get better. I didn’t edit this photo in the least—mother nature provided excellent colors! 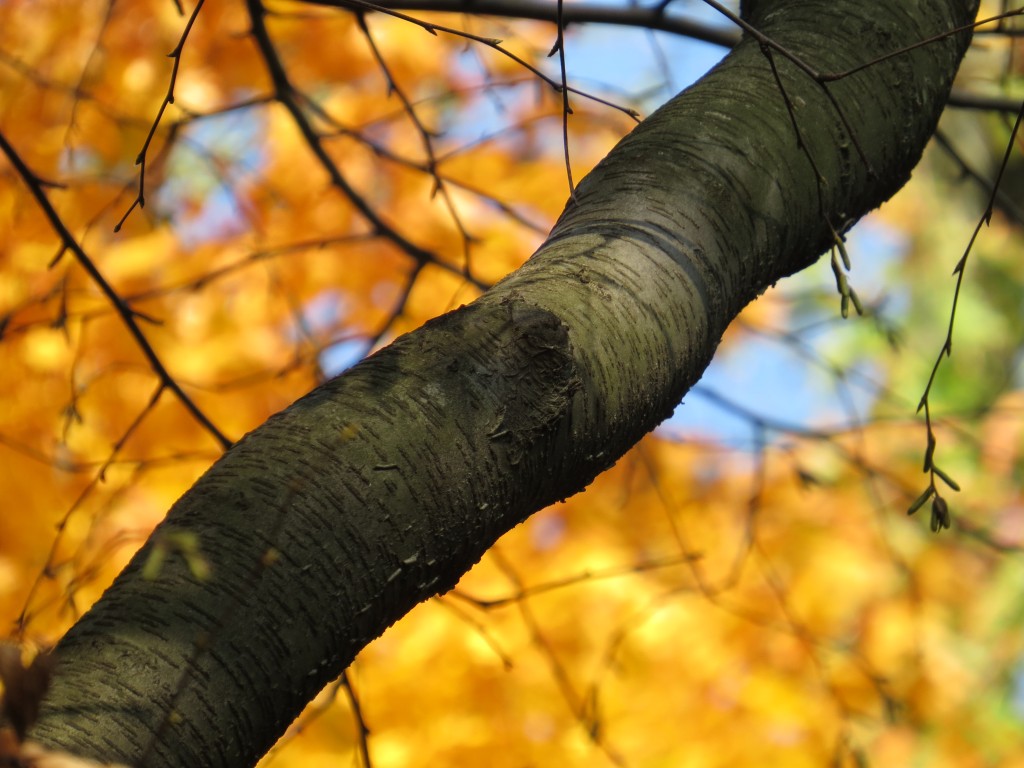 Posted in Around the Garden, Photography on September 25 2013, by Matt Newman

Per Pat Gonzalez, our local shutterbug and Visitor Services Attendant:

“For the first time since I began photographing wildlife at the NYBG in 2008, I was able to get clear, close-up shots of one of the hardest fine-feathered friends to shoot. Say hello to a female Ruby-throated Hummingbird.” 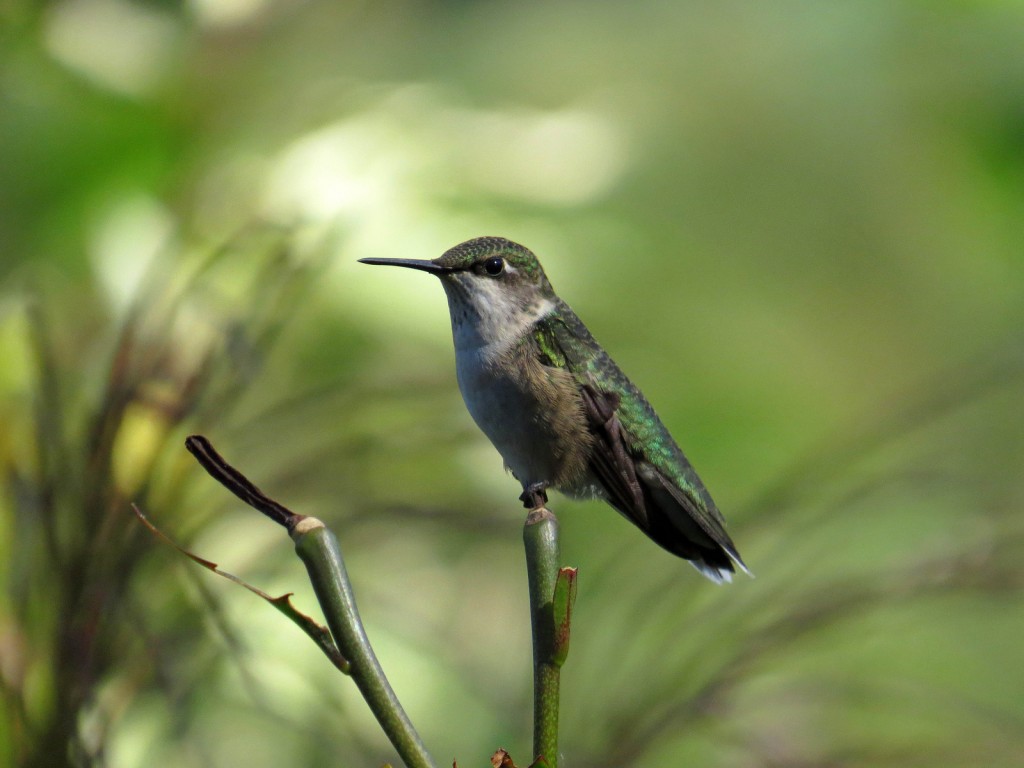 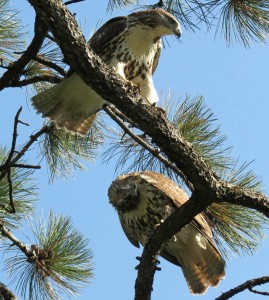 Pat Gonzalez is back this week with a fresh highlight feel from her adventures in the Garden, something I always eat up. As both a guest and a Visitor Services Attendant with the NYBG, Pat has spent the past five years documenting the lives of our raptor residents through the lens of her camera, creating a timeline of activity among the Great-horned Owls, Red-tailed Hawks, Cooper’s Hawks, Kestrels, and other winged wildlife that crosses her path. While I’m sure she’ll laugh off the comparison, I like to think of her as our very own Jane Goodall of the bird world.

Debussy’s “Clair de Lune” is a nice touch, I think, that highlights the streamlined elegance of these birds. Though a brief look back into Pat’s Plant Talk postings will show you just how well it belies their hilarious clumsiness at times. There’s something about seeing a young hawk divebomb a park bench in its efforts to figure out hunting that I can’t help but laugh over.

For the birders and animal lovers out there, Debbie Becker’s long-running Bird Walk returns from its summer hiatus on Saturday, September 7, giving you ample time to prep your notebooks, binoculars, and cameras for some time wandering the Garden. It’ll go a long way toward helping you understand the joy that Pat feels each time she happens across one of her feathered friends.

Photo and video by Patricia Gonzalez.

I don’t think this compilation of critters needs much chatter to introduce. Pat Gonzalez was with the New York Botanical Garden long before becoming a Visitor Services Attendant—as a child growing up in New York City, and a burgeoning photographer, and a wildlife enthusiast. She’s put countless hours into capturing the lives of our furry, scaled, and feathered residents, and continues to do so with an enviable passion.

She put together this compilation of video footage shot at the Garden between 2009 and 2013, and thought you all might like to have a look. I’m of the same opinion.