Wildlife Wednesday: A New Family Takes to the Skies

Posted in Wildlife on July 11 2018, by Patricia Gonzalez

I’m happy to report that for the second year in a row, a pair of red-tailed hawks have nested here at The New York Botanical Garden. This year there are three hatchlings! Here are some entries from my journal about this amazing family of raptors.

Posted in Wildlife on July 21 2017, by Patricia Gonzalez 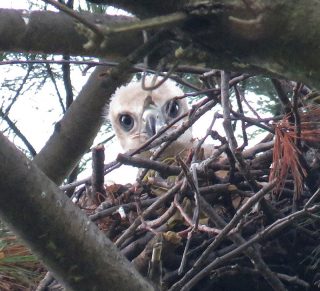 In 2017, we marked the occasion of two young Great-horned Owls fledging after having quite a few adventures during their stay in the Mertz Library nest. This was the same nest built by a pair of Red-tailed Hawks back in 2009, which also happened to be the last year that Red-tails nested at NYBG—until now.

I’m happy to report that there are now three fledgling hawks getting to know their way around our 250 acres. Special thanks to Debbie Becker, our eagle-eyed wildlife expert, for the news! Back in April, she spotted both parents flying overhead. They soon landed in a tree in a heavily wooded section of the Garden, which became their nest. The rest, as they say, is history!

I’ve been lucky enough to follow two of the fledglings around with my camera shortly after they left the nest. It’s fascinating to watch them explore the Garden, and I look forward to watching them grow into effective hunters like their parents. 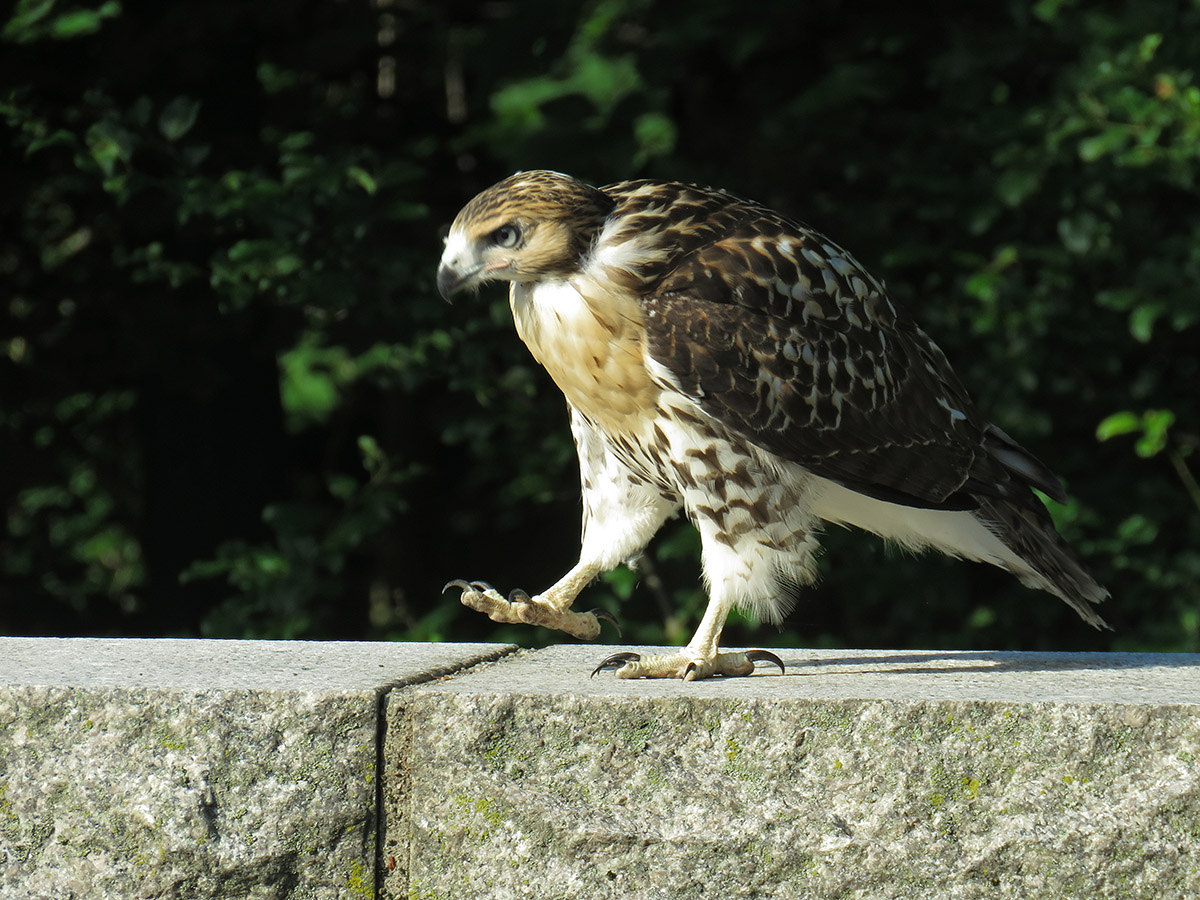 Weekly Wildlife at the Garden: Raptor in Profile

Posted in Wildlife on October 19 2016, by Patricia Gonzalez

I was on my break and headed to the Watson Building when I spotted this young Red-tail just off the Rock Garden. It was very much on the hunt and scanning some nearby squirrels. It didn’t seem to mind my presence one bit, which made for a most excellent photo opportunity. You can see more in this video I shot of the encounter. 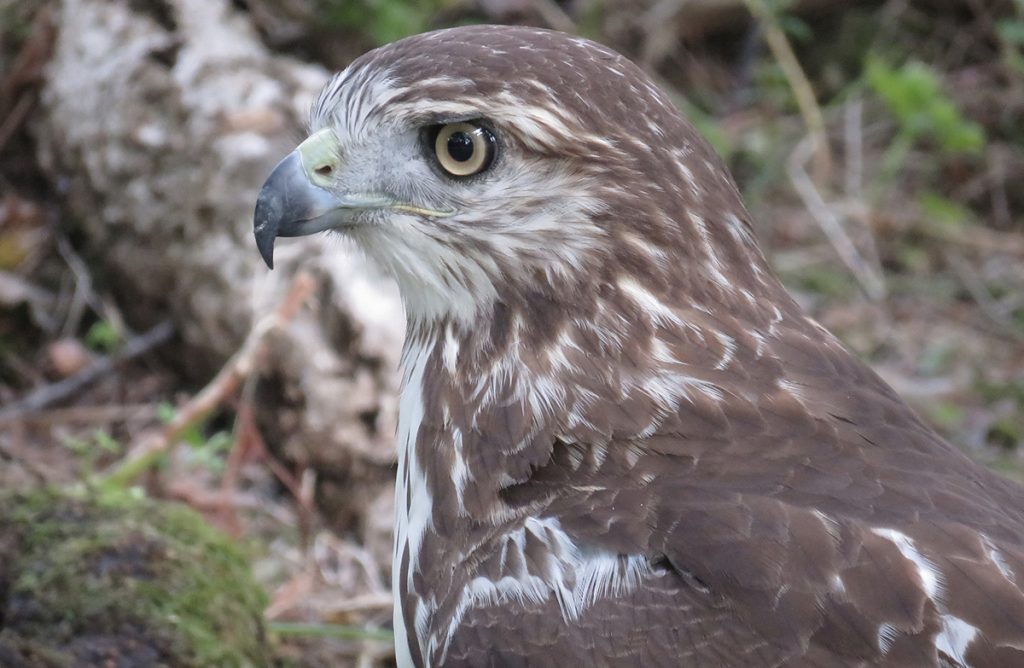 Red-tailed Hawk near the Rock Garden – Photo by Patricia Gonzalez

Weekly Wildlife at the Garden: Birds of a Feather

Posted in Wildlife on November 11 2015, by Patricia Gonzalez 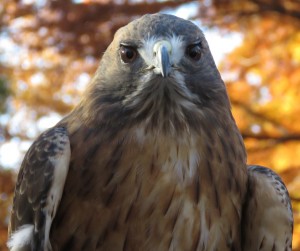 Not only does The New York Botanical Garden serve as a home for lots of wildlife, but this past Sunday, I got to get up close and personal with live birds of prey (as part of the Garden’s Fall Forest Weekend Programming) from the Volunteers for Wildlife Hospital and Education Center. They are non-profit wildlife hospital and education center based in Locust Valley. I got to meet a Screech Owl, Kestrel, Great-horned Owl, and Red-tailed Hawk.

See a slideshow of photos and a brief video from the event below, and don’t miss our second Fall Forest Weekend—complete with live birds of prey in attendance—this Saturday and Sunday, November 14 and 15!

Weekly Wildlife at the Garden: Lurking in the Wetlands

Posted in Wildlife on May 26 2015, by Patricia Gonzalez

This Red-tailed Hawk was found lurking in the Wetlands during my lunch break on April 26 of this year. I noticed him while walking along the Wetlands trail—he was staring intently at some nearby squirrels. A number of visitors caught sight of him as well and we all began snapping away with our cameras.

At that point I had to leave him to get back to my post; whether or not he made one of those squirrels his snack, I don’t know. 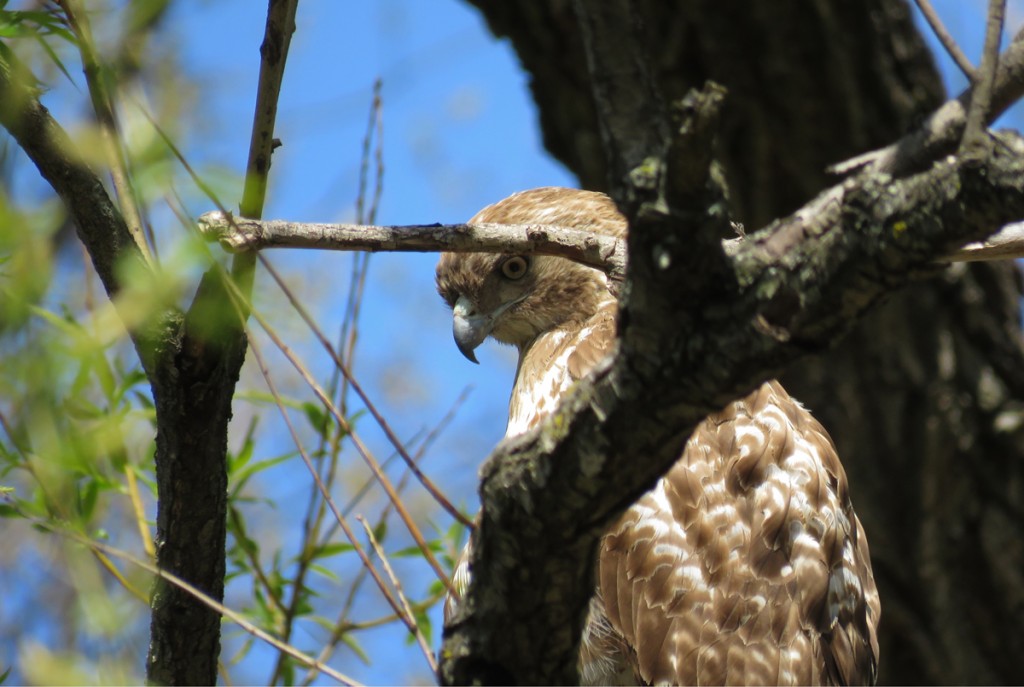 Morning Eye Candy: Ever Feel Like You’re Being Watched?

Posted in Photography on August 6 2014, by Lansing Moore 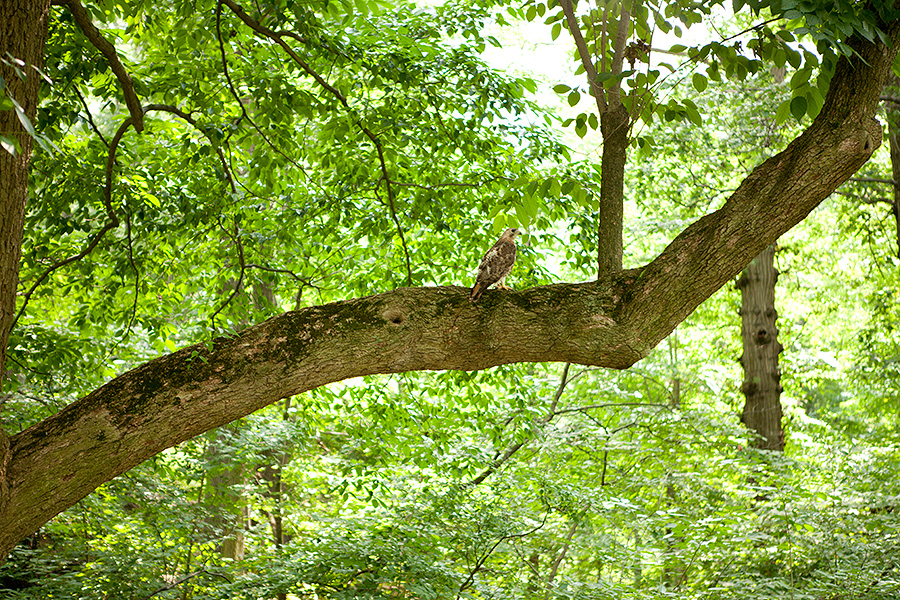 A Red-tailed Hawk in the Thain Family Forest – Photo by Ivo M. Vermeulen 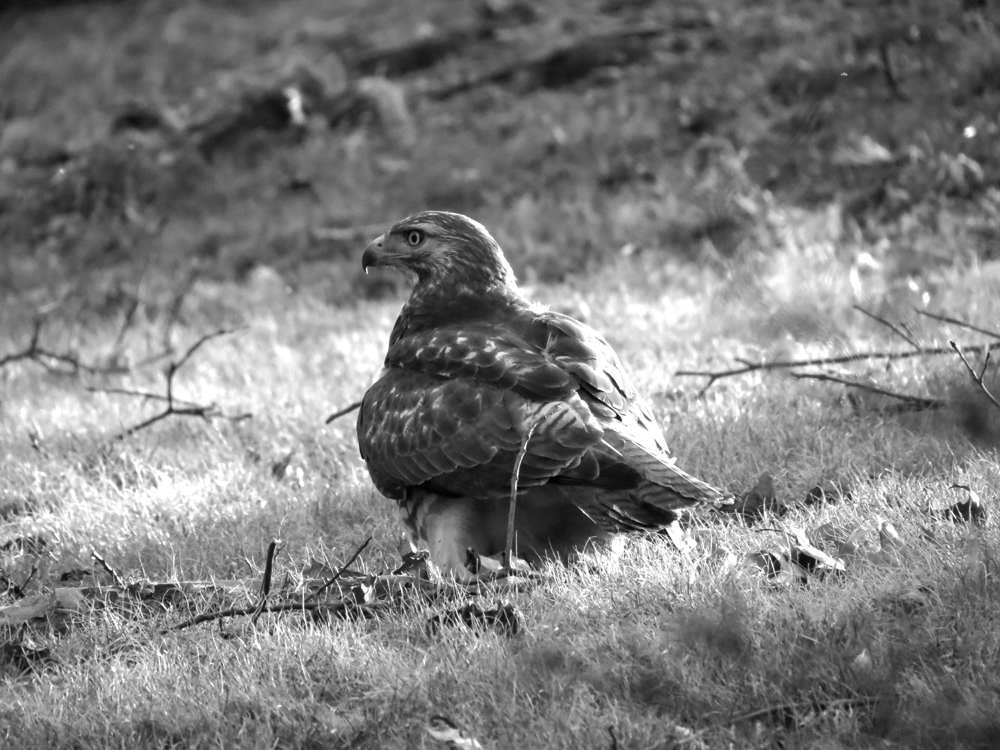 Posted in Around the Garden, Photography on June 29 2013, by Matt Newman

Her expression suggests she’s not too fond of the wildlife paparazzo, wouldn’t you say?

Today, Debbie Becker leads one last Saturday Bird Walk before putting these popular group binocular outings on hiatus until September 7. Join her at 11 a.m. near the Reflecting Pool of the Leon Levy Visitor Center! 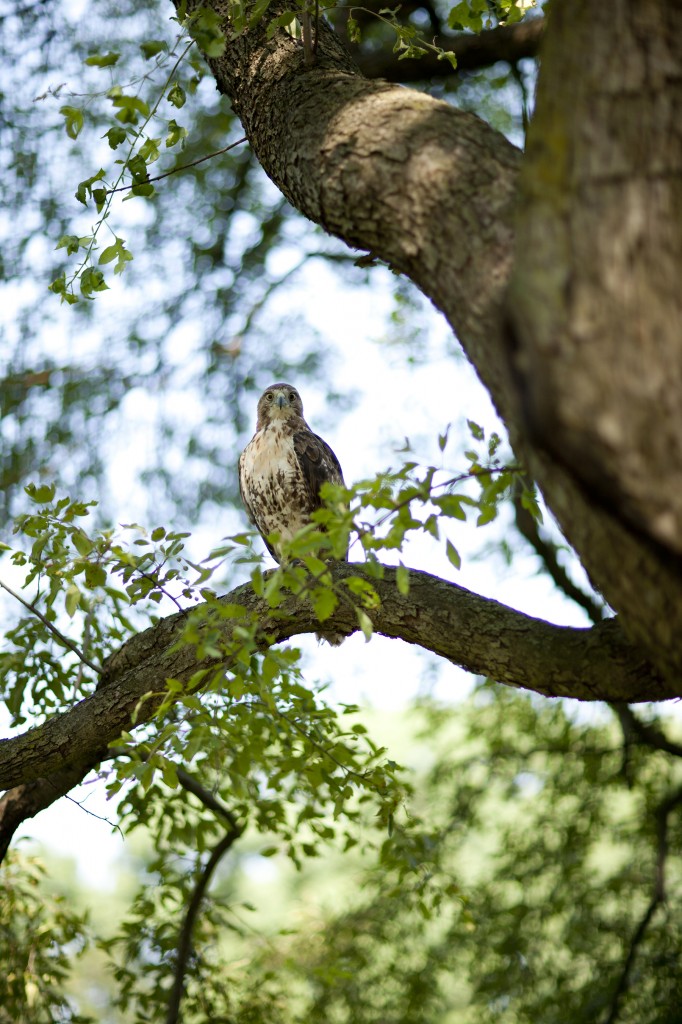 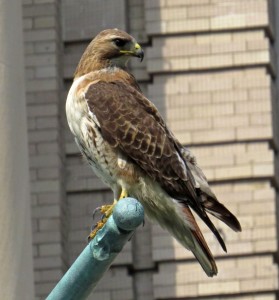 Sure, the first things you think of when hawks come to mind are probably hooked talons, beaks, and stealthy swoops on unsuspecting (and occasionally adorable) rodents. But beneath their noble profiles and well-earned heritage as the monarchs of the sky (sorry, butterflies), even our Red-tailed Hawks have moments of awkward indignation that border on the cute and fluffy. Bath time in particular—with all its flopping and splashing about—is usually cause for giggles. And lucky for us, this often takes place in the Fountain of Life just outside our offices in the Library Building.

Our resident hawk aficionado and Visitor Services Attendant, Pat Gonzalez, happened to be outside filming one of the local hawks as it fed, dodged resentful bluejays, and washed off the day’s exertions. I’ve bumped the video forward to the most comical bit, but you can catch the rest by dragging the cursor to the beginning.

Posted in Around the Garden, Photography on January 18 2013, by Matt Newman

When Bird Walk leader Debbie Becker makes the claim that winter is the best season for bird-watching, there’s no equivocation. Wayne Cahilly, our institutional mapping specialist, knows this. While hoping to capture the dawn sun filtering through the dome of the Enid A. Haupt Conservatory, he found this Red-tailed Hawk waiting patiently for breakfast to scurry past. The resulting photographs are worth sharing. 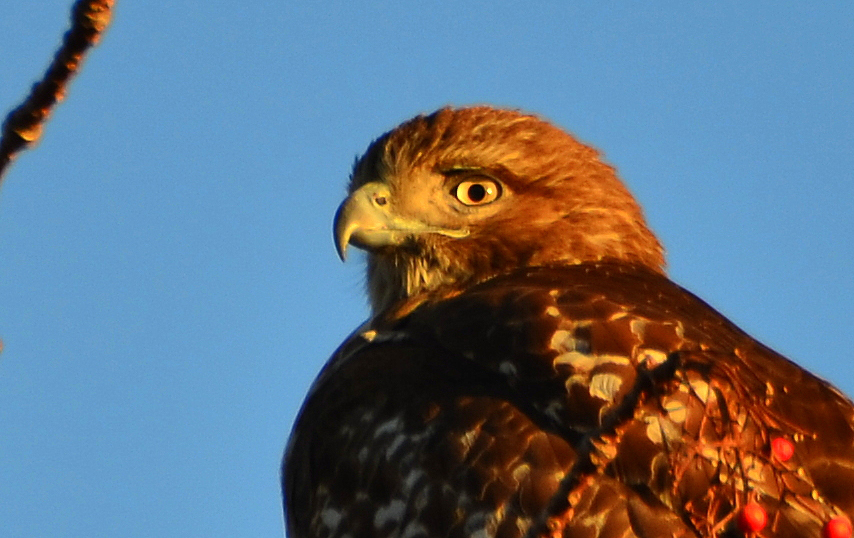 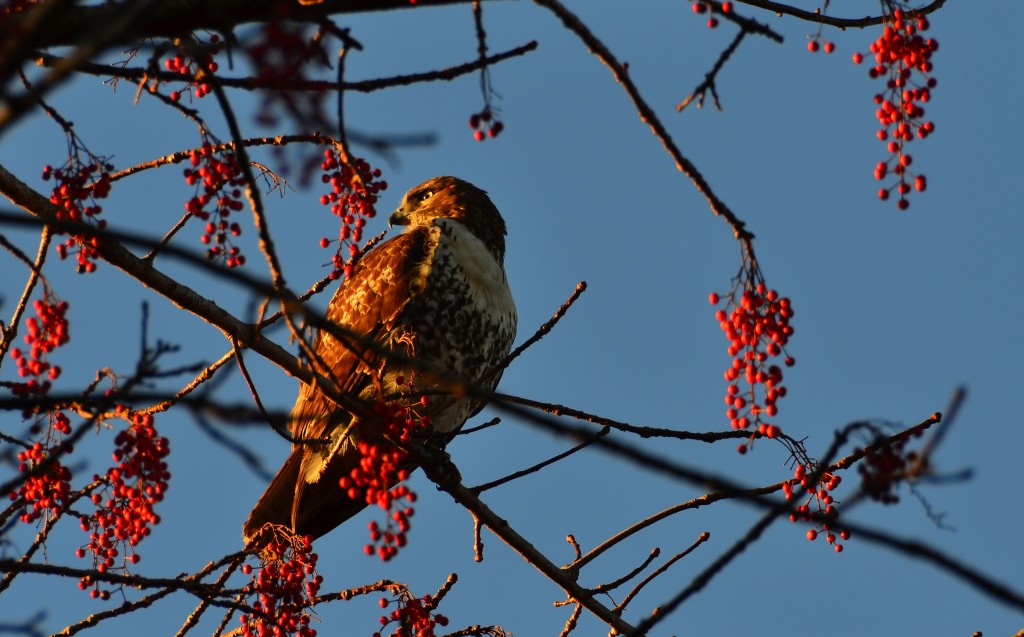