Posted in Wildlife on March 30 2016, by Patricia Gonzalez 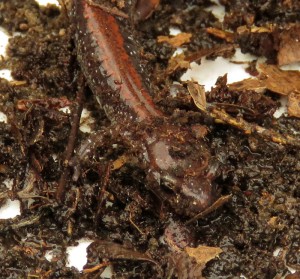 Since 2010, I’ve had the pleasure of getting to know some of our citizen scientist volunteers. From time to time, I get to join them during their phenology walks in the Thain Family Forest. While they conduct their tree studies, I keep an eye out for owls, hawks, raccoons, and other wildlife that call the forest their home. On a recent phenology adventure, I got to photograph one of the Garden’s more elusive inhabitants: the Eastern red-backed salamander. Thanks to our intrepid Forest Manager, Jessica Schuler, I enjoyed a wonderful close-up encounter.

Forest Restoration: Managing for the Future

Posted in Horticulture on June 4 2015, by Jessica Schuler

Jessica Arcate-Schuler is NYBG‘s Director of the Thain Family Forest.

Ecological restoration, or “the process of assisting in the recovery of an ecosystem that has been degraded, damaged, or destroyed” (SER, 2004), is what the Forest staff, interns, and volunteers do in the Thain Family Forest every day to reduce invasive plants and increase native plant regeneration in managed areas through planting.

We start with an inventory that samples nearly 250 plots that are 10 meters by 10 meters squared. The sampling involves measuring all trees and shrubs, living or dead, with one centimeter or greater diameter at breast height (DBH) and collecting percent cover information for all herbaceous plants, woody plant seedlings and saplings, and non-living components such as leaf litter, coarse woody debris, and bare soil. This inventory is repeated every five years and provides a picture of forest change overtime that allows us to prioritize management and guide the restoration process: inventory, establish priorities, manage invasive species, restore native species, and repeat. The Forest staff last carried out an inventory in 2011 and will be repeating this process in the summer of 2016.

Not For Sale: Invasive Plants Regulated in New York State

Posted in Horticulture on March 9 2015, by Jessica Schuler

On March 10, 2015, the sale of 75 plant species will be prohibited or regulated in New York State because of their invasiveness and “to help control invasive species, a form of biological pollution, by reducing the introduction of new and spread of existing populations there by having a positive impact on the environment (NYS DEC, 6 NYCRR Part 575 Prohibited and Regulated Invasive Species, 2014).” This is a big step in the ongoing battle with invasive species or non-native species that cause harm—harm to human health, economic harm, or ecological harm (Executive Order 13112, 1999).

New York first proposed these regulations through the Invasive Species Council in 2010, “A Regulatory System for Non-native Species,” that defined a process to prohibit, regulate, and evaluate unlisted non-native species. As you read through the 75 listed plant species in New York’s regulations, they are all species already known to cause ecological harm and are broadly established in the region. Blacklisting a species in law is one way to prevent further spread. However, “it is difficult to get a species on a blacklist unless it has already caused damage, and by then it is usually too late because the great majority of established introductions are irrevocable (Simberloff, 2001).”

Invasive Species: What’s in Your Neighborhood?

Posted in Gardening Tips on July 7 2014, by Jessica Schuler

You might have noticed them crawling in your curtains, or buzzing around your house lamps; alarming numbers of brown marmorated stinks bugs settled down for winter this year. These alien invaders are just one of many invasive species that have taken hold in the Hudson Valley. Perhaps you have noticed Japanese stiltgrass (Microstegium vimineum) in a park or have seen viburnums eaten to shreds by Viburnum leaf beetle (Pyrrhalta viburni). These invasive plants and insects are just the ones we see. There are many others we don’t notice, clinging to the bottom of boats, hiding beneath the bark of trees, nestled in firewood, or attaching themselves to clothes or shoes—as in the case of seeds.