Posted in Bill Buck, From the Field, Science on February 1 2011, by William R. Buck 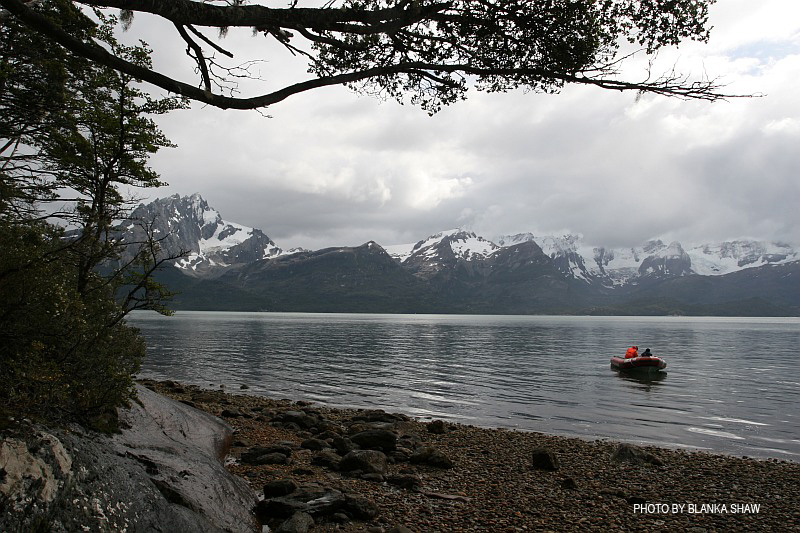 We awoke on the morning of January 25 in Seno Agostini, having arrived there at about 4 a.m. Initially the journey was rough because of strong winds and large swells. Standing on the deck, but huddled close to the cabin, I was in awe of the weather. Since childhood in Florida, the U.S. capital of lightning, I have loved violent weather. On this day, the wind howled and the boat was tossed and turned by the rough seas; every few seconds waves would crash over the deck. To be on a small ship amidst such weather is amazing. Of course it helps to have a ship that you have faith in and a reliable crew. A few of our group felt a bit queasy, but no real problems came up (pun intended). After about an hour and a half we entered a narrower channel and the seas were calmer. Only then was dinner served.

Coming out on deck the next morning the scenery was spectacular. We had come to this spot because in 1929 a Finnish bryologist, Heiki Roivainen, visited the site and, in an alpine stream, collected a moss that has not been found since. Because this is a moss that is part of Juan’s doctoral work, he was anxious to find it again. The site is called Mt. Buckland, and it rises to over 6,000 feet but is mostly snow-covered above. Supposedly the moss was collected at about 2,000 feet in an alpine stream. All around us rugged peaks rose to the sky, all with either snow or glaciers. At least for a short time the sun shone brightly. 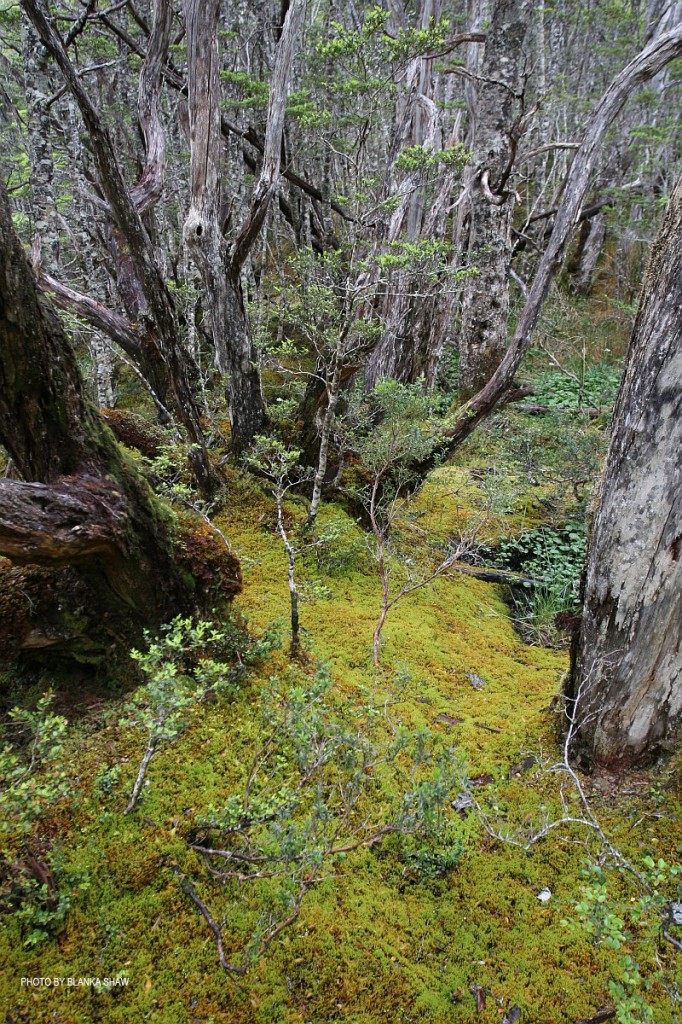 So, optimistically, Jim and Juan headed up the slopes of Mt. Buckland. Blanka and I chose to visit a southern beech forest on the other side of the sound that had a large glacier at its back side. It was about a 20 minute zodiac ride across the sound but as soon as we hit the rocky beach we knew we were in a special place. Numerous small, glacier-fed streams wound their way through the landscape and occasional large rock outcrops promised multiple microhabitats for bryophytes. Once Blanka entered the forest, about 10 yards past the coastal scrub, it took me about an hour to get her to move ahead. The forest floor was carpeted with a thick layer of liverworts that swallowed our boots with every step. Trees were sheathed with bryophytes and lichens, often several times the diameter of the trunks themselves. We worked our way through the forest toward the glacier, marveling at the diversity and sheer biomass of bryophytes in the forest.

Over three hours later, we came to a vertical rock wall at least 50 feet tall and realized we would not make it to the glacier! However, we were scheduled to be picked up in about 45 minutes and needed to return to the shore anyway. Blanka had taken a GPS reading on the beach and now took another. In all that time we had gone only about 300 yards! Nevertheless, it still took us the full 45 minutes to return to the shore because the landscape was littered with fallen trees and crossed by steep ravines, but mainly because we couldn’t resist stopping and gawking at the bryophytes (and collecting them, of course). 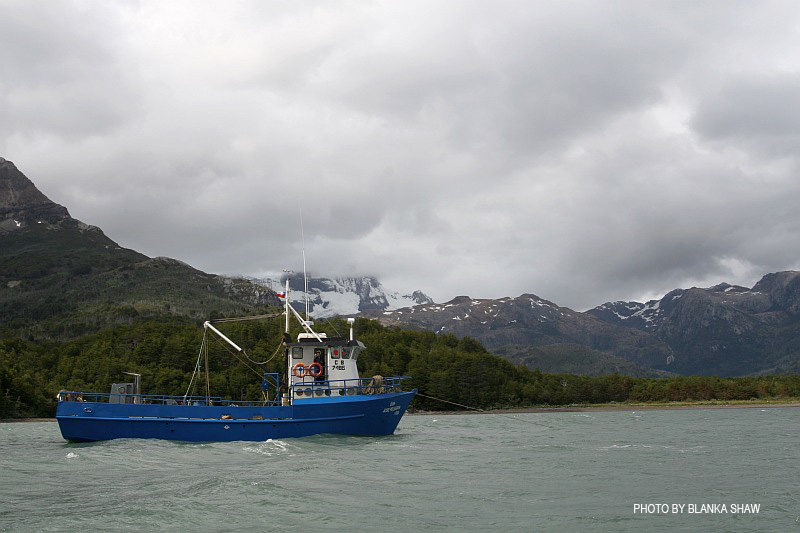 On the ride back to the ship we were fortunate to have beautiful weather, almost all the surrounding peaks were visible. However, the other group was less fortunate. Their attempt to get to the upper slopes of Mt. Buckland was thwarted by a huge field of native barberry (locally known as calafate). The barberry is the source of a favorite local fruit, but has thorns an inch long, as well as spiny leaves. After forcing their way through this almost impenetrable scrub for over half a mile, they realized they were less than a third of the way through and it had taken hours. Plus, even if they got through the barberries, they would have to turn around and go back through it all again.. All came back with multiple puncture wounds and large thorns still stuck in their bodies (not to mention shredded rain gear). Unfortunately the moss we had hoped to find for Juan would have to wait for another day.

We had a 14 hour ride to get back to Punta Arenas to finish drying our plants before meeting our colleague Matt von Konrat at the airport. In the early evening we began our trip and soon realized what we had missed by entering Agostini Sound in the dark. Multiple glaciers–the ice a pale turquoise blue–came directly down to the sea. The sea itself was an amazing shade of green (it seemed to lose something when I was told the color was due to glacial silt) and the sky above us a brilliant blue. The dark green of the forest was all around. Everyone just stood on the deck in amazement at the natural beauty completely surrounding us. 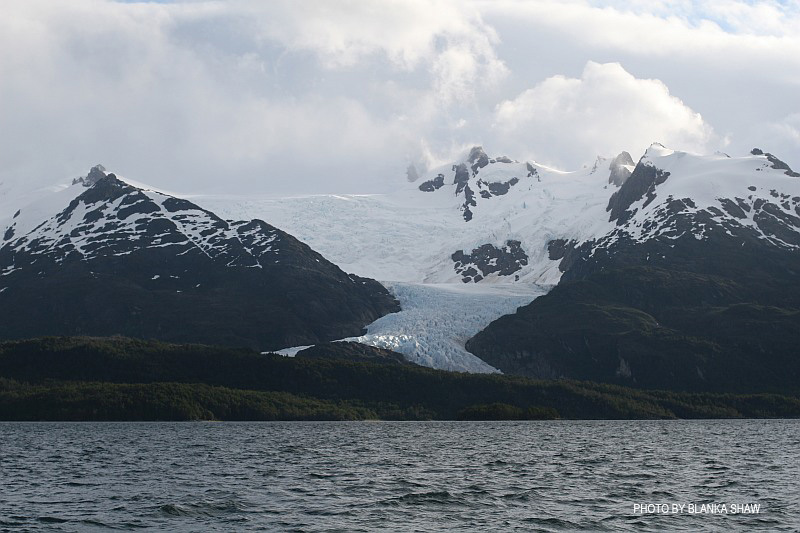 As we passed the last glacier, the captain suddenly slowed the engines and headed toward it. All around, small icebergs of many shapes dotted the sea. The crew, using a grappling hook and rope, got hold of one of the icebergs, but it was obviously a case of biting off more than you can chew. I was told it would be used as ice for our drinks that night! Once the crew had the small iceberg alongside the ship, it became obvious that it was too heavy to lift aboard. Then the most amazing thing happened: The cook, brandishing a bright red axe, wiggled through a gap in the railing to about his waist and began chopping away at the ice. Finally a piece that could (barely) be lifted on board was obtained, but it still required four strong men to hoist it. Ultimately it was more of a novelty than a practicality since right from the sea it mainly tasted of salt. However, as amused as we all were with this escapade, I’m sure the crew has been equally amused by a bunch of mainly gringo scientists running off into the woods in the rain, gathering moss, and returning to the ship grinning ear to ear. The fact that we have 14 people in very tight quarters, and everyone has remained good-natured–if not downright jovial–serves a testimony to how much everyone has enjoyed this first stage of our expedition. We have been constantly  in awe of how pristine the landscape is around us, and how fortunate we are to be there. 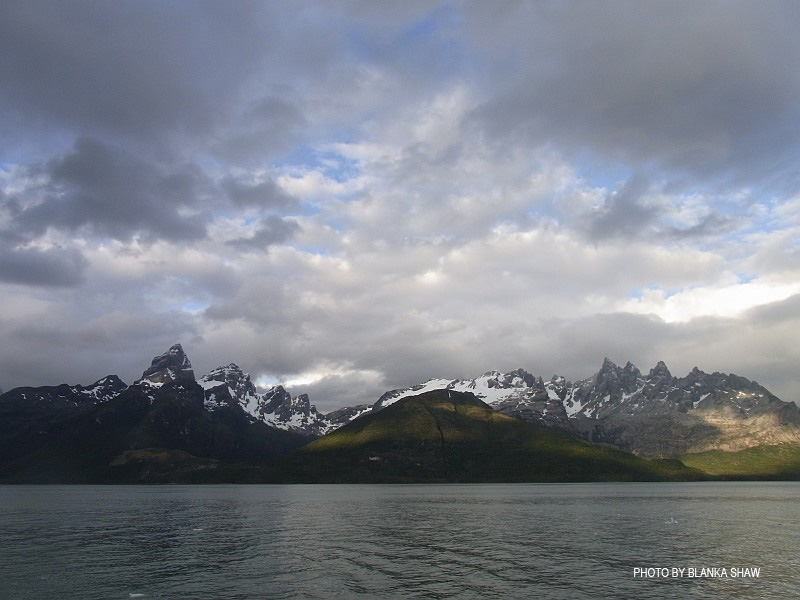 We arrived at the dock in Punta Arenas at about 7 a.m.,  several hours earlier than we had asked to arrive. Much to everyone’s delight, even before the first person left the ship, a new toilet was brought on board and was being installed as we packed our gear for two days in Punta Arenas. Our drying racks are working fairly well, but we think that with slightly higher wattage light bulbs (we are using 75 watt bulbs, not the 100 watt bulbs as I had thought) and a few fans to move the air around that the system will work much better. Since this is our first time using the dryers, we’re still tweaking them (and it gives me an opportunity to visit a large hardware store).

Juan and I picked up Matt von Konrat at the airport and welcomed him to southern Chile. We have just returned from dinner, now with our entire scientific contingent. Tomorrow we will do a bit more shopping (and get our clothes washed!). We intend to depart at 10 a.m. on Friday morning, January 28. We’re hoping with Matt here we can get the satellite modem working better (since he is the one who rented it), so I hope my next message can be sent from the field rather than just written from there.

Hooray for plumbing, eh? Did that glacial ice taste any different once you got the salt off of it?