Posted in Gardening Tips on June 25 2014, by Sonia Uyterhoeven 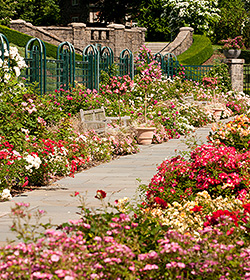 The roses in the Peggy Rockefeller Rose Garden demanded a lot of patience this year, but it was well worth the reward. The harsh winter resulted in severe die back for many of the hybrid teas and floribundas, so we cut them back hard in the spring and gave them a jolt of nitrogen-rich fertilizer to get them going.

The cool spring had the roses growing at a slow and steady pace and they sat in bud throughout the month of May, waiting for warmth. Generally, our roses start to open around the third week in May and peak bloom spans from the end of May into the first few weeks of June. This year the old-fashion garden roses were pretty much on schedule but our repeat-bloomers were a good two to three weeks behind.

The warm weather finally arrived, and it was certainly worth the wait. To call the roses resplendent would be an understatement. I drove by late last week and my view from the top of the hill was a mosaic of colors as vibrant as an Andean textile.

Posted in Around the Garden on June 1 2014, by Matt Newman

Did I mention the Rose Garden was beginning its bloom? You can actually keep up with the color via our Rose Watch page, which we update each week to reflect the current state of the flowers. And, of course, you can check it out in person next weekend, June 7 and 8, during our Rose Garden Celebration! 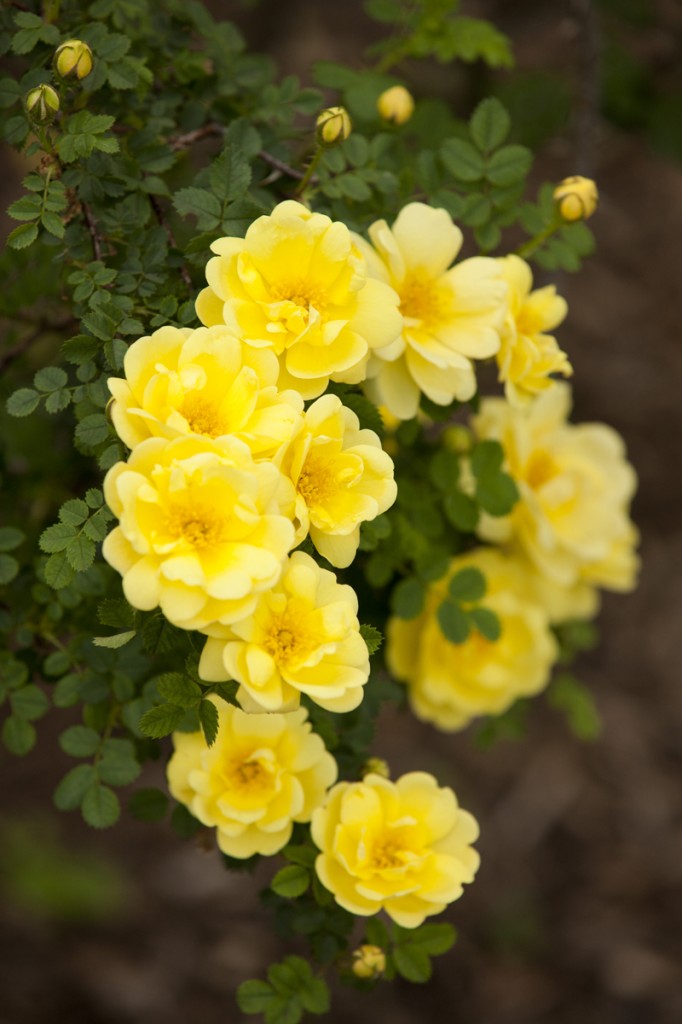 A Rough Winter for Roses

Posted in Horticulture on May 2 2014, by Stephen Scanniello

Stephen Scanniello is NYBG’s Curator of the Peggy Rockefeller Rose Garden. The author of six books on roses, his latest is A Rose By Any Name. Stephen is the recipient of the Jane Righter Rose Medal from the Garden Club of America. He gardens in Barnegat, NJ.

Compost piles filled with blackened rose canes eclipsed the forsythia as the harbinger of this year’s rose season. Gardeners everywhere, dealing with the effects of a long cold winter followed by roller coaster spring temperatures, were left with no alternative but to prune their roses much more severely than they have in recent seasons. The Peggy Rockefeller Rose Garden wasn’t immune to this situation. From modern hybrids to rugged old roses, plants were shortened, some nearly to ground level. Am I worried? No. I look at this as “tough love” for roses.

Experienced gardeners know that this is an opportunity to rejuvenate a rose plant. With sharpened secateurs, and a shot of courage, this seemingly somber situation becomes a chance for you to improve the health of the rose bush. Removing dead wood and weakened canes encourages strong basal growth. By June, this plum-colored growth will produce beautiful roses.

Posted in Photography on November 14 2013, by Ann Rafalko

The non-rose plants in the Peggy Rockefeller Rose Garden are trying to give the last of fall’s roses a run for their money. 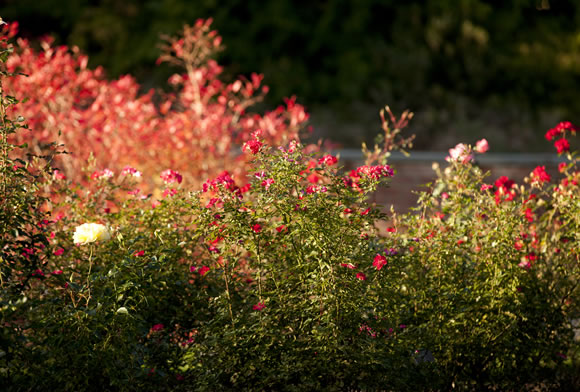 Posted in Photography on October 19 2013, by Ann Rafalko

The Peggy Rockefeller Rose Garden apparently didn’t get “the memo” about the color of fall flowers. 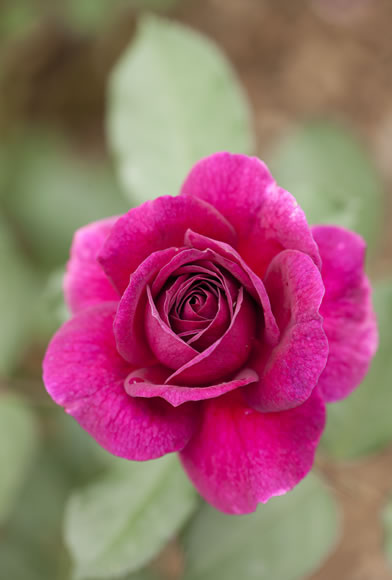 Posted in Around the Garden, Photography on July 6 2013, by Matt Newman

The Peggy Rockefeller Rose Garden doesn’t “quit” in the summer. It just settles in. 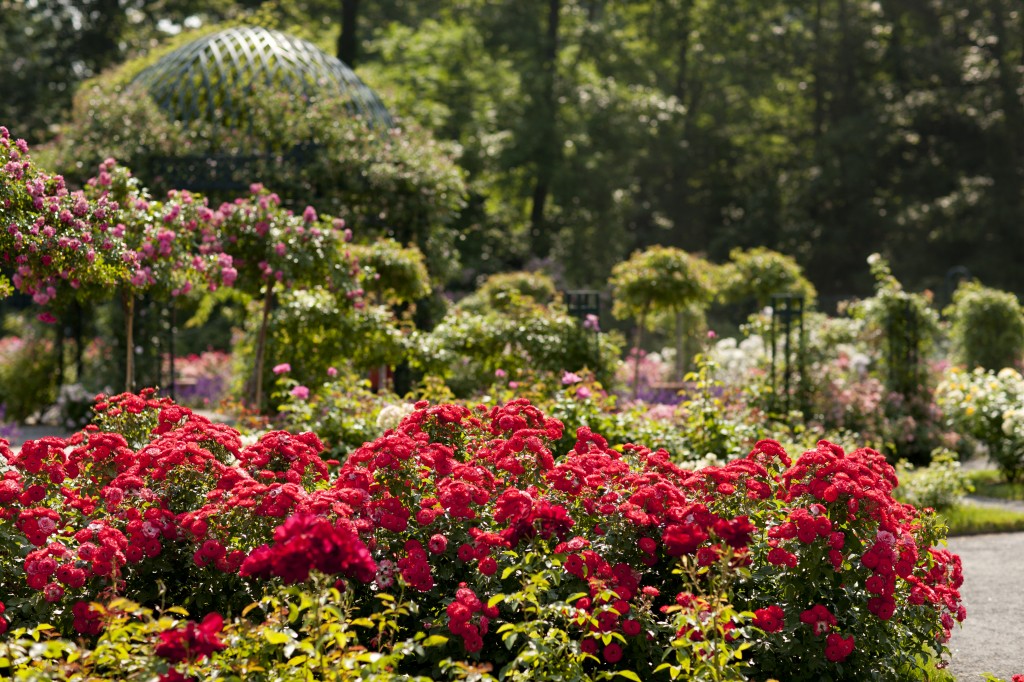 Posted in Gardens and Collections on June 18 2013, by Sonia Uyterhoeven

Last week, I was out in the Peggy Rockefeller Rose Garden with Ken Molinari, our Rose Garden Foreman, where he told me that we’re using a lot of foliar feeds this year. With so many roses—over 680 varieties and more than 4,400 roses—we have to fill up a large 100-gallon tank and go down on Mondays, when the Garden is closed, to spray the organic fertilizer on the roses. But it’s not solely out of convenience that we time this application for a day when the Garden is closed to the public; many of the fertilizers that we use are fish-based, and only a cat would be happy with the scent.

We have been using a blend of a number of products, including Organic Gem® liquid fish fertilizer, Monty’s® Liquid Plant Food (otherwise known as Monty’s Joy Juice), and Dyna-Gro Pro-Tekt®. The latter is a silicon solution which supplies potassium and silicon to help the rose build stronger cell walls, which in turn helps protect it from black spot and piercing insects. Add all of these ingredients together and you have a recipe for healthy roses that are better able to defend themselves from pests, diseases, and environmental stress.

These are a Few of My Favorite Things…

Posted in Gardening Tips on June 11 2013, by Sonia Uyterhoeven

As the rain fell heavily on Friday, I found myself worried that it would do a number on the Peggy Rockefeller Rose Garden. It’s in its prime right now, and if I told you it was “ablaze with color” that would easily be an understatement; looking down from the top of the hill, all before you is a sea of color. Thankfully, my fears were at least somewhat unfounded—things looked a little wet, soggy, and disheveled come Saturday morning, but gardens are resilient and the roses perked up quickly without too much loss.

Every year I select a few of my favorite roses to discuss, and I thought this would be a good time to do just that considering the Rose Garden is in peak bloom. With it looking so spectacular, it wasn’t easy making my choices, but I managed to come up with a few that caught my eye.

For those with a romantic inclination, I would like to guide you to rose ‘Traviata™’—a hybrid tea from the well-known and respected French hybridizer Meilland. The rose is cherry red, the flowers are enormous and fully double, and the stem is sturdy and fit for a cut flower arrangement. Another classic in the Rose Garden is a German Kordes rose called ‘Brother’s Grimm Fairy Tale®’. It’s one of those roses that display a mélange of colors, with orange, yellow, pink, and salmon all swirled into one breathtaking concoction. This four-foot rose is a floribunda, meaning that instead of just one large flower on a sturdy stem, each stem is covered with a bouquet of blooms. ‘Brothers Grimm Fairy Tale®’ really does get smothered with blooms. The Fairy Tale series from Kordes are hybridized to look like old-fashioned roses with their fully double blooms.

Posted in Around the Garden, Photography on June 9 2013, by Matt Newman

If any day of the week screams “ROSES!” it’s got to be Sunday. Especially any Sunday spent lounging around in the spring light under a competent hat brim, eating Neapolitan ice cream and soaking up the sights and scents. 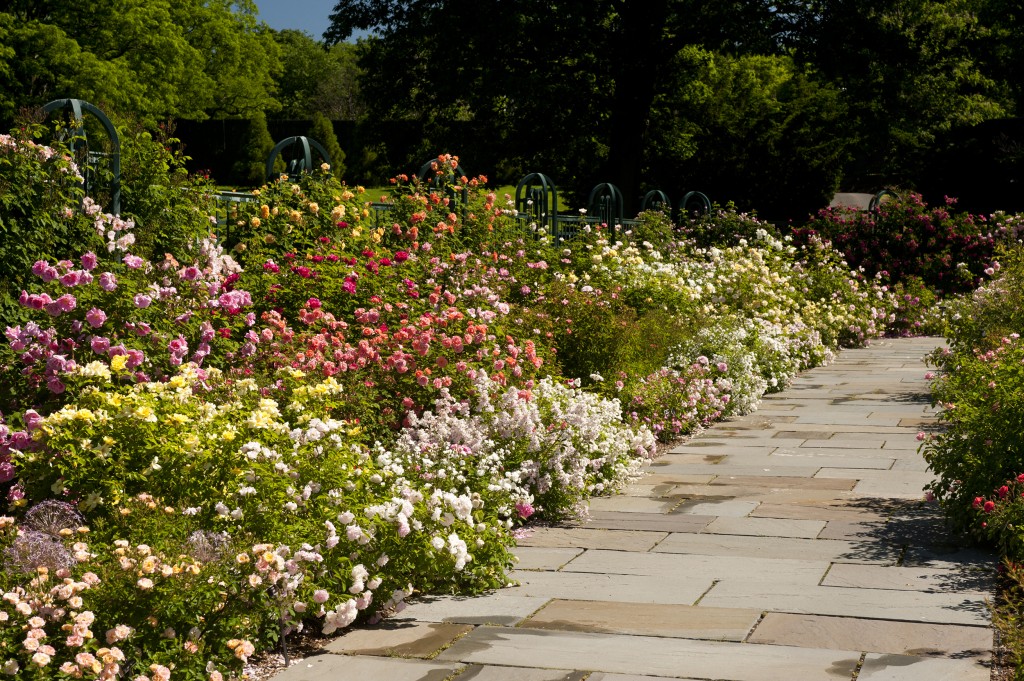 This Weekend: Food, Flowers (and Fun, Of Course)

Posted in Around the Garden, Programs and Events on June 7 2013, by Matt Newman 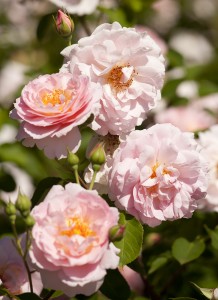 Certainly the biggest news going into this weekend comes about on Monday, when we once again buddy up with Mario Batali for the Edible Academy Family Garden Picnic. For the past few summers, our work with this renowned chef and Friend of the Garden has produced some of the most fun and delicious adventures found in the Ruth Rea Howell Family Garden, and this year’s event is no different! In fact, we’re even raising the bar. Join us on Monday, June 10 for an exclusive picnic dinner as conceived by Mario himself, followed by a book signing with the chef and his always lively cooking demonstration. And there are plenty of family activities to keep even the most tireless toddler occupied in the meantime.

All proceeds from this event will go to the Edible Academy, an NYBG initiative to create a year-round center for gardening education that focuses not only on the practice of being a green thumb, but the important connections between plants, gardening, nutrition, and health. And it’s not just for kids—the Edible Academy will educate families, adults, and teachers as well. Tickets to the picnic are dwindling, so register while you can!

Over the past few days I’ve also been in touch with our Senior Advisor for the Rose Garden, Peter Kukielski, trading numbers at a rapid-fire pace. “90%, 95%, 99%!” The Peggy Rockefeller Rose Garden went from a subtle collection of buds to a vibrant spread of blooms in the course of a week thanks to the warmer weather, and that sudden explosion of color needed tracking on our Rose Watch page. I could barely keep up! But just yesterday, as I was about to leave for the day, Peter floated me one last message: “Make it 100%! I’m recording peak bloom for 2013 as of today!”