Posted in Bill Buck, From the Field, Science on February 7 2011, by William R. Buck 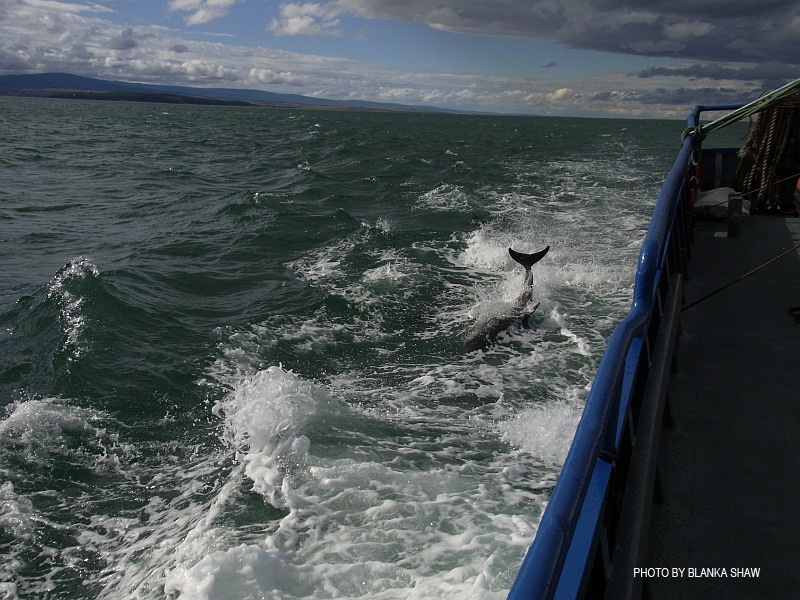 Our two days in Punta Arenas seemed to drag on after such a great first part of our expedition. However, it did mean we were able to pick up Matt and buy a few things to tweak the moss dryers. On the morning of January 28 we returned to the port to board our trusty ship. Going out onto the dock, the ship, which was sandwiched between a large naval vessel and a massive cruise ship, looked even smaller. A number of the passengers disembarking from the cruise ship stopped and asked what we were doing. As soon as I hear an American accent I tell them “Your tax dollars at work!” and briefly explain the project. I think it is important for them to know that their taxes pay for something more than war. 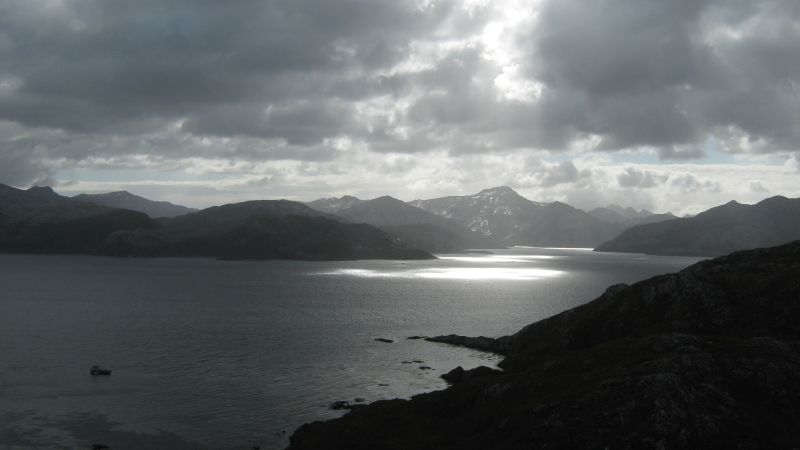 Shortly after we untied from the dock and headed south, once again motoring through the Straits of Magellan, a pod of at least ten dolphins joined our ship. They criss-crossed in front of our ship for over an hour, seemingly doomed to a collision which never came. The same time the sea was remarkably calm; even in canals where we had previously encountered violent water, the ship hardly rocked. The captain chose to take an inland passage rather than the more commonly used Cockburn Canal. We seemed, time and again, to enter into a dead end sound, only at the last minute to watch it turn into a previously invisible sound. A short time later the passage we had just come from had similarly disappeared. Going down these narrow waterways, as opposed to wide canals, gave us a better view of the incredible forests that march up the shores. Although continuously overcast, the evening light was almost luminescent and navigating through a veritable maze of islands was a special experience. Once again I delighted in Matt’s reaction to the astounding landscapes, as I had with the others in our group the previous week. 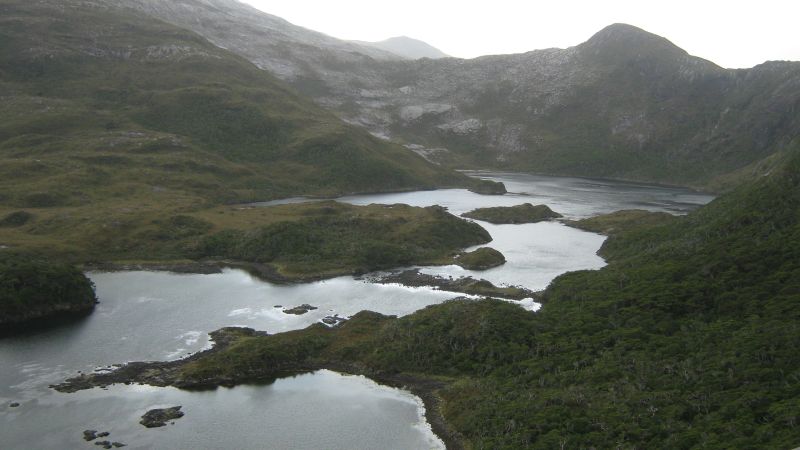 Before going to bed I spoke with the captain and explained the area we wished to cover and told him that it was his decision, based on navigability and weather, as to where we started. If we had relatively good weather, we would stop at the westernmost islands south of the Brecknock Peninsula; or if the weather looked bad, we would go to the eastern end of the area where sheltered sounds would allow us to still work. The far western islands have proven tricky in previous trips where it rained hard and incessantly with fog drifting across the area making it unsafe to get far from the ship. These islands have no land between them and Antarctica. However, it is this very climate–as harsh as it may seem when we are out collecting–that may well be encouraging the growth of mosses that we do not otherwise see in our region. During the night, most of us awoke as the ship hit rough waters and was buffeted about as we rounded the Brecknock Peninsula in seas open to Antarctic winds and storms. In the middle of the night, it almost seemed dreamlike. 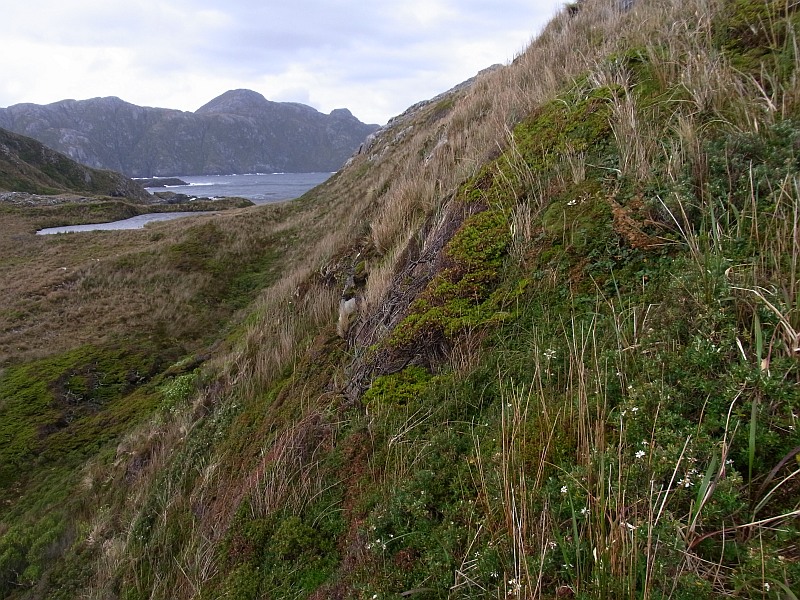 When we awoke I asked the captain where we were. Isla Astrea!! This is the westernmost island, and a pretty small one at that. The vegetation appeared to be mostly low shrubs, but looks would soon be found to be deceiving. I had forgotten what this vegetation was like from previous trips, but remembered almost immediately upon hitting the beach. The “shrubs” include some true shrubs (like Hebe), but are mostly dwarfed southern beech trees which, in more sheltered habitats, can reach over 70 feet tall. As you try to walk across the landscape you soon realize you are walking on the canopy! And it becomes even more obvious when you suddenly fall through and the tops of the shrubs are waist high. This happens about once every few steps, making progress frustratingly slow. I initially had aimed for a forest that didn’t look very far away, but an hour later it didn’t seem much closer. I decided to make the best of where I was and every time I fell through the branches, I would get down and look all around in the sub-canopy area and ground. 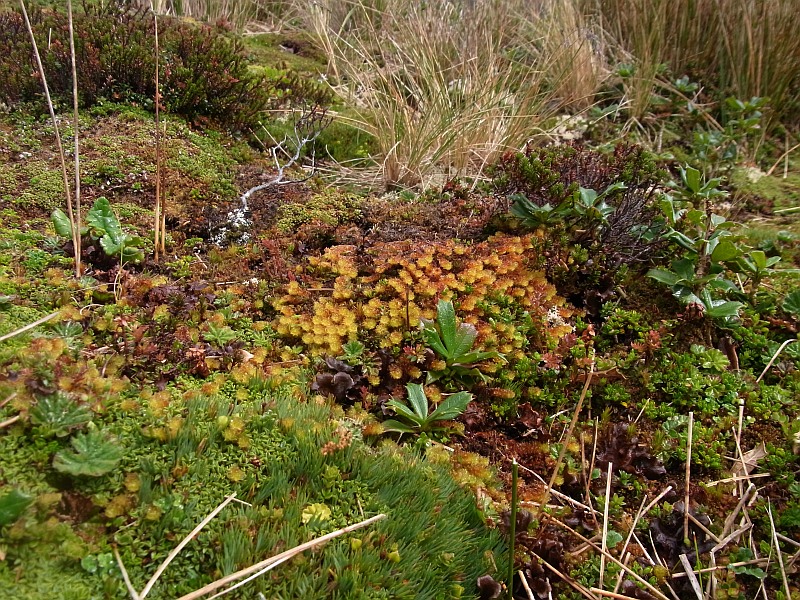 Almost immediately I was rewarded. At many of our sites last week I expected to see a particular moss that is particularly showy (Hypopterygium) but I never saw a stem. Here, the moss grows in profusion confirming that the climate indeed does result in different bryophytes. The excitement lasted until the next big find. At the base of a small cliff, growing completely under the shade of the woody vegetation I came across a moss completely unknown to our region. Right then I knew I could go back to the ship and be pleased with the morning’s collections. However, the walk back to our pick up point resulted in even more nice finds. Much to my surprise my colleagues, who had fanned out in different directions, didn’t find either of the two mosses that I had found that morning. The weather today has been amazing. Although overcast with a thin cloud cover, it seldom rained. However, the wind did blow, and it was cold, coming straight from Antarctica. A hot lunch was most welcome. 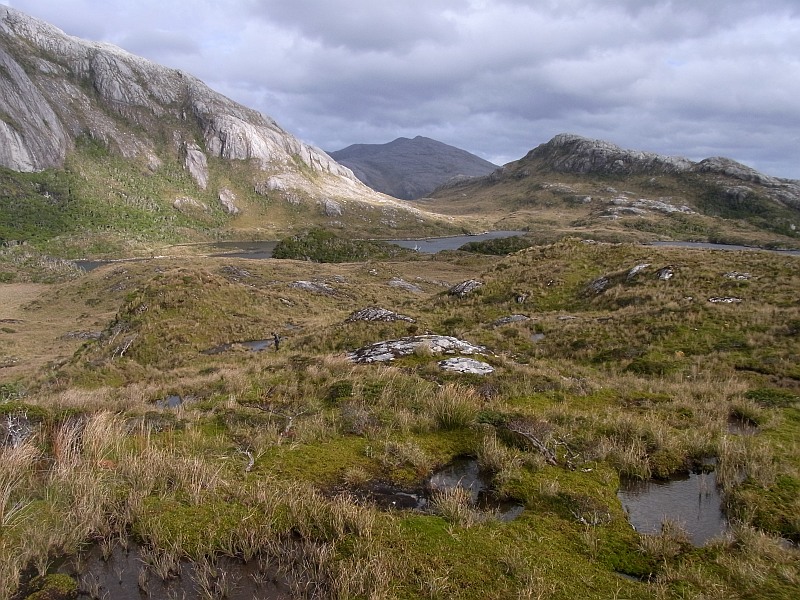 After lunch we headed across the Brecknock Canal for Isla Aguirre. We had to wait to put our collections onto the newly improved dryers because the canal crossing was going to be rough, but of short duration, and the hatch to our drying room had to stay closed (or have waves crash into it). When we anchored in the sound from where I now write, I was able to see the dryers myself. Immediately upon entering the hold, it was noticeably warmer than before, and the small fans were aimed upward to keep the air passing over the paper bags. I’m very hopeful that the dryers will now work like a charm.

We went out for a few hours in the afternoon but compared to the morning it seemed more like last week’s collecting sites, and so didn’t generate as much enthusiasm. So now all our collections are on the dryer and Jim and Blanka are working at a pair of microscopes to look at and photograph the oil bodies of liverworts. These are membrane-bound bodies in the cells of almost all liverworts but not in any other kind of plant. They are ephemeral and need to be studied in fresh material because most are gone shortly after drying. It’s incredible such an activity could be taking place on a crabbing ship at the very southern tip of South America in an area few people have ever seen. Tomorrow we move to Isla London, the next island southeast of Astrea, and one of the outer islands like it. I can hardly wait.