Posted in Bill Buck, From the Field, Science on February 8 2011, by William R. Buck 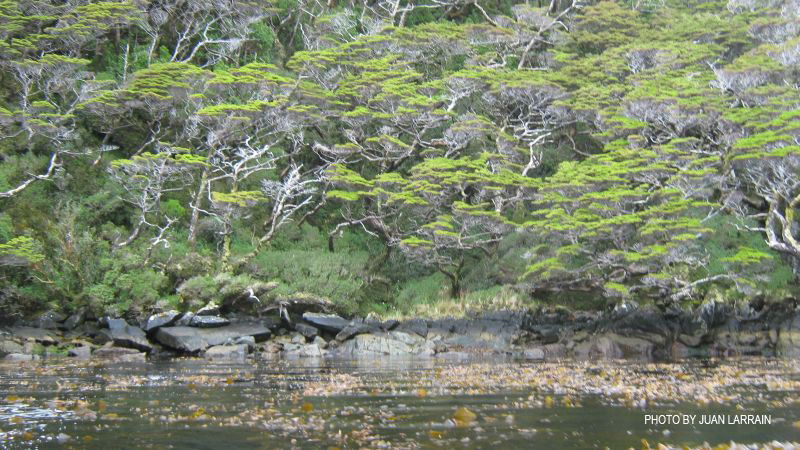 Early in the morning the crew moved the ship to a harbor on the northeast side of Isla London, one of the islands in direct contact with the weather from Antarctica. After two days of glorious weather, Matt was beginning to wonder if  the weather I had told him to prepare for was just a myth. He soon found out how true my warnings had been. The morning started out a bit windy and overcast, but without rain. 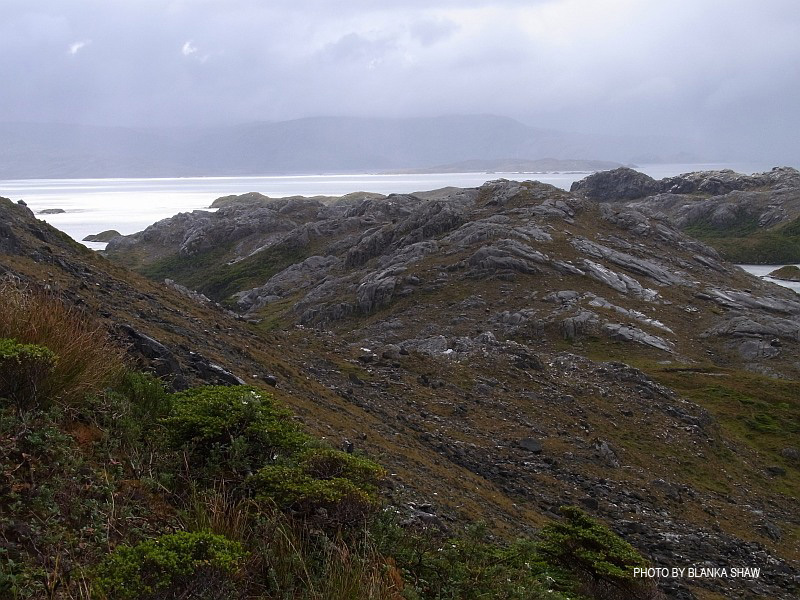 One group set out to with the intention of ascending Horatio Peak, while Blanka and I headed to a rocky outcrop in the opposite direction. As the zodiac neared the shore the wind started to pick up, and soon became a strong steady wind came out of the southwest, gusting so hard at times to literally blow me off my feet. Fortunately, as we worked up the slope the wind was at our backs and helped propel us as we scrambled over the vegetation, walking on top of the canopy of dwarf beeches as on the previous morning. 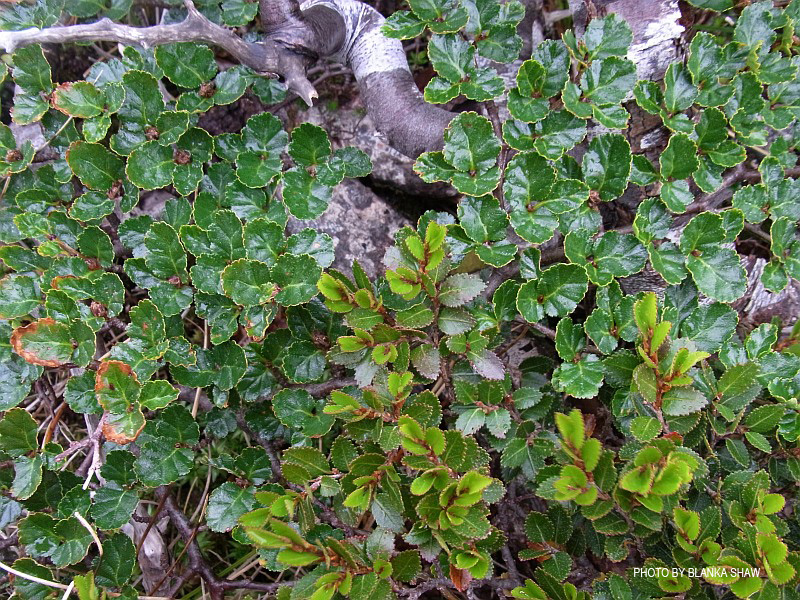 In short order, though, a heavy, horizontal, rain began. I had become separated from Blanka, all I could do was hope that she was able to find shelter. (I later discovered she had also tried to find me to let me know she was fine). On the side of a ridge I plopped down and sank into the shrubs; I was completely below the surface of the dwarf tree canopy, but could see out. The rain blew in sheets as spray from the sea was whipped up and blown ashore. The water dripping down my face tasted salty. Because of the high winds, it was too dangerous to walk around. For about a half an hour I remained immersed in the shrubs and watched as the rain and wind blasted the island. I was glad I was not up on an exposed ridge like the other group, and hoped they had found shelter. After some time, the winds became less gusty and died down, and the rain softened so that it no longer felt like pellets as it hit my skin.

I emerged from my shelter and went looking for Blanka. Since she always used her GPS unit, I knew she would find her way back to our pick-up point, but I wanted to make sure she had fared well during the worst of the weather. I worked up the slope, calling out to her in the brief moments that the wind calmed, but with no success. From the higher area I could see our ship in the distance, and hoped that the zodiacs would be able to get out on the rough seas to pick us up. 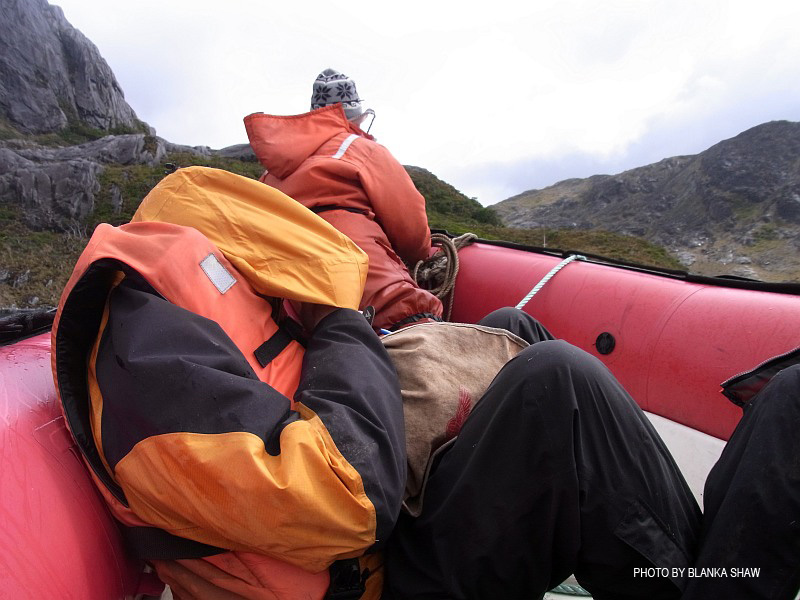 As I approached the pick-up point, about 15 minutes early, I saw the zodiac coming, much to my relief. My relief was complete when I saw Blanka on the other side of a low ridge (where I had earlier sought refuge from the storm) heading for the pick-up point. After fastening on our life jackets (but surely with all our rain gear and collecting equipment, if we fell into the frigid water we would need more than a life jacket to survive), the crew told us to sit on the bottom of the zodiac, not the inflated sides as usual. As we bounced along, from wave to wave, we huddled in the bottom of the zodiac as sea spray washed over us. As odd as it may seem, it was exhilarating and we couldn’t help but laugh with each new assault by the sea. Blanka said it was her favorite zodiac ride of the trip. Like us, the other group returned wet and cold, but fine from their morning adventure. 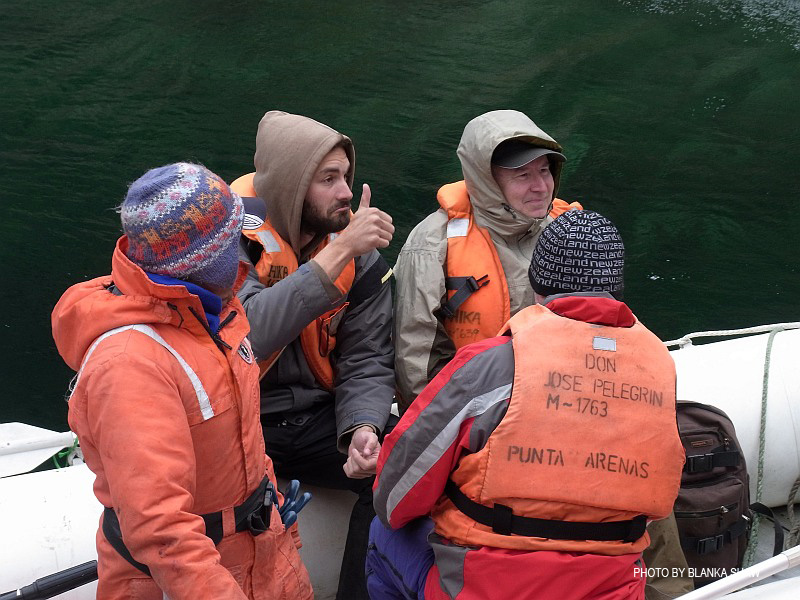 After a hot lunch and some time spent preparing the morning’s collections, we headed up to a sound in the Brecknock Peninsula. Along the way, we stopped once again for water. Our water tank holds around 200 gallons, and for the size of our group, lasts three days. In Punta Arenas we filled the tank with chlorinated city water. Since that time, we had  been looking forward to refilling the tank with more of the delicious fresh water that pours off the mountains.

In the late afternoon we anchored and prepared to head out into the field once again, but before I headed out, I wanted to get the morning’s very wet collections onto the dryers. As I did this, Jim, Matt, and Blanka headed off toward a waterfall on the other side of the sound. As I finished suiting up, the skies opened up and  poured, and then turned to sleet. I decided to wait a bit which gave me the opportunity to see something that had been happening daily on our ship, but always while I was in the field. 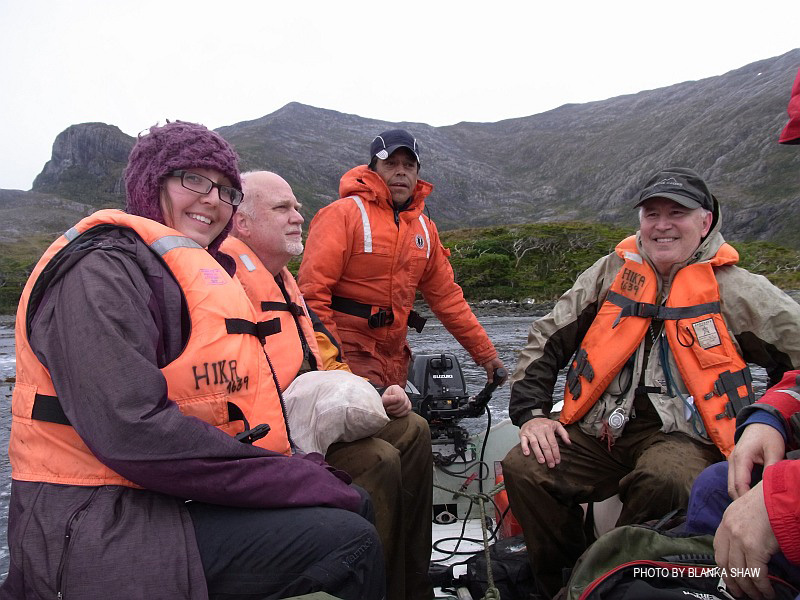 To explain this, though, I need to first introduce the rest of our party. Since the cost of renting the ship was the same whether we had one person on board, or ten, I opened up five spaces for students or researchers as part of our cooperation with the Universidad de Magallanes, and the Sub-Antarctic Biocultural Conservation Program at the University of North Texas, which had helped organize the trip. The participants are three Chileans and two Americans. The Chileans are Rodrigo and Jaime, who are studying marine algae for a population genetics study, and Ernesto, who is studying the effects of the locally invasive beaver and mink. Ernesto is also the local person responsible for much of the organization of our trip. The first of the two Americans is Kimmy, an undergraduate student doing a study on the spore dispersal of a moss that is restricted to growing on herbivore dung (Tayloria mirabilis) by flies on Navarino Island. This moss is also the emblematic moss of the park on the island. The other student, J.P., is a first year master’s student working on the local Magellanic perception of the value of ecosystems (for example, as a watershed). After the first half of the trip he had to fly to Puerto Williams to continue data-gathering for his thesis.

Jumping to the present, what I as able to see Rodrigo and Jamie head into the water. They always brought back the same kelp and I couldn’t figure out why. Today I finally had the opportunity to ask. Apparently there are four genetic kinds of the kelp and they are documenting the distributions of these. So far Ernesto has only found evidence of a few beaver, but no mink. The animals were introduced into Argentina in 1946 for fur, but because of the climate the fur was found to be of a lower quality than from animals raised in the Northern Hemisphere. Regardless, the animals naturalized and are now causing major ecological damage in the Magellanic region. The beavers are devastating river valleys and the mink are exterminating local birds.

The captain just told us that the weather is predicted to improve in the night (even though it is now raining at 10:00 p.m.). If that proves to be true then we’ll head off to Isla Sidney–the last of the three main islands in a chain that are the outer buffer toward Antarctica–in the morning. We have had very different weather on each of these islands, and are hoping for a repeat of the weather we had on Astrea, not the weather we had today on London! On the other hand, if the weather stays stormy, we’ll continue hitting the sounds on the south shore of the Brecknock Peninsula on the Isla Grande de Tierra del Fuego. Tomorrow will tell.

The area is very scenic and it looks like an interesting place where a bryologist would want to go to collect mosses and hepatics. I imagine some species new to science will eventually be described when the participants return to their home institutions. The weather did not look very hospitable but I’m sure that the bryophytes enjoyed it even if the participants may not have been too happy with it for the time that they were there. I’ll look forward to reading the report about what mosses were found during the expedition.