Posted in Holiday Train Show on December 31 2013, by Ann Rafalko 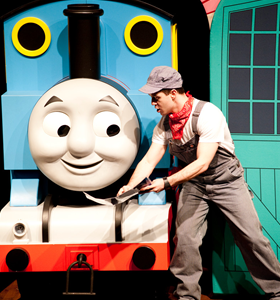 What’s better than the Holiday Train Show? How about when we combine the Holiday Train Show with All Aboard with Thomas & Friends! That’s right, starting on New Year’s Day your train-crazy little ones can get a double dose of all things train in one single day (and if you take Metro-North Rail Road to Botanical Garden Station, that’s a triple dose of all things train!).

Running through January 26, your kids can join Thomas and Driver Sam on a new fun-filled, sing-along, mini performance adventure by helping them decorate the station in time for the big Sodor surprise party before the guest of honor arrives! At the end, be sure to have your camera ready for an exciting photo op with the stars of the show!

Posted in Holiday Train Show on December 18 2013, by Ann Rafalko

I am one building out of many that make up a UNESCO World Heritage Site and the most famous cultural attraction in an historic kingdom in an ancient land. Rediscovered in 1812 by a Swiss explorer, I was originally established as the capitol of a civilization that controlled an important trade route, which was subsequently diminished under Roman rule. An ingenious system of water management allowed me to thrive, but these systems were damaged by an earthquake in the fourth century, which accelerated my decline. My facade is pockmarked by bullet holes because I was rumored to hold riches within my decorations.

Posted in Holiday Train Show on December 12 2013, by Ann Rafalko 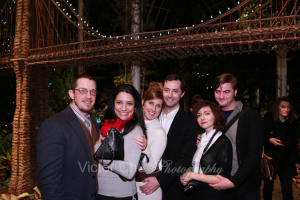 They say a picture is worth a thousand words, so take a look at all these smiling faces!

Bar Car Nights is your chance to see the Holiday Train Show in an adults-only setting, cocktail (or mocktail) in hand. Thousands of twinkling lights set the scene for a festive evening with friends or family (or even soon-to-be family, we’ve heard tell of an engagement or two!).

This Saturday’s signature cocktail combines a few of the iconic flavors of the season; ginger, apple, and something that is really more of a sensation than a flavor, bubbles! Called the Winter Intensive, this festive libation combines Barrow’s Intense Ginger Liqueur with hard apple cider, and a sparkling topper. It’s the perfect way to warm you from the inside out!

Posted in Holiday Train Show on December 11 2013, by Ann Rafalko

If you follow Broadway north from the Battery until it turns into New York State Route 9, and keep going to a town in Westchester, you will find me by taking a left and heading for the river. I was the home of a famous author, synonymous with New York City and New York State whose extensive travels influenced his most famous work and my architecture. I was once one of the most famous houses in all the land because of my beauty and my owner’s fame, but now I slumber until the spring when perhaps a spectral game of nine-pins will awaken me for the tourist season once again.

Posted in Holiday Train Show on December 6 2013, by Ann Rafalko 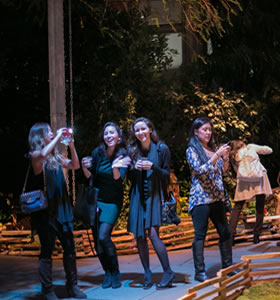 It’s time for Bar Car Nights! Bar Car Nights are your chance to see the Holiday Train Show in a sophisticated, adults-only setting, cocktail in hand.

Starting tonight and happening again tomorrow, Bar Car Nights are a festive, sparkling, cheer-filled opportunity to embrace the holidays while indulging the kid inside you. The Holiday Train Show is a must-see for architecture buffs, train enthusiasts, and anyone who loves New York City.

See all your favorite New York-area landmarks recreated in miniature using only plant materials under the dazzling domes of the Enid A. Haupt Conservatory while indulging in a signature cocktail designed just for us!

Bar Car Nights are a great date night, a wonderful way to celebrate the holidays with your friends, or a chance to see one of New York City’s most enchanting holiday experiences in a sophisticated, child-free setting. Cap the night off with dinner from one of our exclusive partner restaurants or nosh your way around our new Holiday Dining Pavilion: Streets of New York, Stephen STARR Events’ dining experience that celebrates everything delicious about historic NYC street food.

A very limited number of tickets are still available for tonight and tomorrow, so snap them up as quickly as you can and join us for this enchanting evening!

The Train Show in Real Life, This Sunday in Queens

Posted in Holiday Train Show on December 5 2013, by Ann Rafalko

This weekend you have a great opportunity to visit some of the buildings of the Holiday Train Show in real life, as the Queens Historical Society hosts the 26th annual Queens Holiday Historic House Tour on Sunday, December 8.

Start your tour at any house, and then hop on a trolley and head to the next destination! Each location will offer special activities, delicious refreshments, and a glimpse at what life was like during the holidays decades, or even centuries ago.

Posted in Holiday Train Show on December 4 2013, by Ann Rafalko

I am a beloved New York City museum, famed for my collection of old masters and important furniture. I am currently riding a wave of popularity based on a coincidental association with one of the year’s most popular novels. I am located on the Upper East Side, was once owned by a prominent American industrialist, and I am home to one of the world’s premier art research facilities and libraries. Who am I? 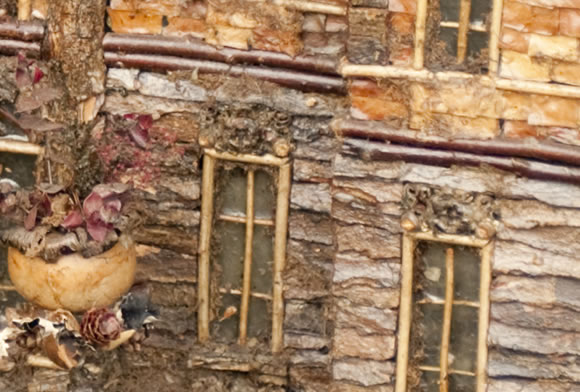 Raise a Glass to the Holidays

Posted in Holiday Train Show on December 2 2013, by Matt Newman 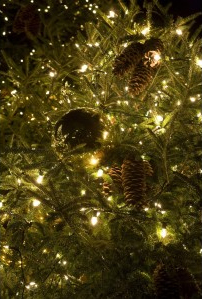 Everything’s that much better under a twinkling glow, and the Holiday Train Show is no exception. On Friday and Saturday nights this week, December 6 and 7, we’re turning down the lights and turning up the festivities with the first of this season’s Bar Car Nights. And if you’ve never been to one, just think of it as a chance to experience our dozens of miniature landmarks and model trains in an entirely new atmosphere—one highlighted by the cocktails and mellow tunes that make for a perfect evening in New York.

We’ll have a professional photographer on hand to capture some memories (because who wants to carry a point-and-shoot when clutch real estate comes so dear?), and new this year, you’re welcome to head outside to the Conservatory Courtyard for a live ice carving demonstration from Okamoto Studios. Their expert artists join us to turn enormous blocks of ice into all manner of holiday art, from trains to Garden landmarks and more.

Across the way in the Holiday Dining Pavilion, Stephen STARR Events will be cooking up a storm from a New York-themed menu celebrating everything delicious about historic NYC street food. Though if you’re looking to make the night last even longer, hold onto your Bar Car Night ticket stub: we’ve got partnerships with a number of gourmet restaurants offering discounts and bonuses for those who join us, all of which you can find listed here.

Bar Car Nights: The Spirit of the Season

Posted in Holiday Train Show on November 21 2013, by Ann Rafalko 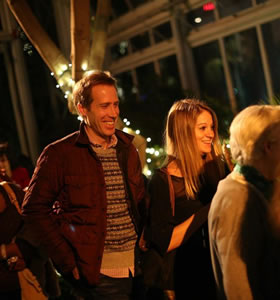 One step into the magical world of the Holiday Train Show should convince you of its heartwarming magic. It is a delight for children of all ages! But, should you have an interest in enjoying the Train Show‘s many splendors alongside children above a certain age, we have you covered there, too. Bar Car Nights are an adults-only way to see the Holiday Train Show at night, when the lights are twinkling and the Enid A. Haupt Conservatory‘s domes are aglow, cocktail in hand.

Posted in Holiday Train Show on November 19 2013, by Matt Newman 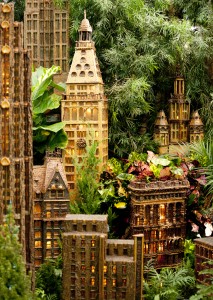 It’s been over two decades since we first introduced New York City to the Holiday Train Show, and in that time we’ve pieced together one of the most impressive collections of miniature architecture ever seen—a cityscape of over 150 cherished landmarks hosting a constant parade of large-scale model railway trains. But the buildings don’t come ready-made out of a box; the bridges aren’t raised overnight, and the tracks can’t find their way without helping hands. It’s an enormous undertaking to unveil this seasonal treat each year, and thanks to our friends with THIRTEEN NY, the premiere of Treasures of New York: Holiday Train Show is throwing a well-deserved spotlight on all that hard work.

From American steam engines, subway cars, and modern freight trains to the natural architecture itself—each building painstakingly assembled using natural components like leaves, twigs, and bark—Treasures leads the viewer on a tour through the entire holiday production. You’ll join artist Paul Busse in Alexandria, Kentucky, where his Applied Imagination workshop has been crafting uncanny models of New York’s famous buildings since the Holiday Train Show first opened in 1992. Back then, our collection of models barely made up a tiny neighborhood—a far cry from the dozens of models that now call the Enid A. Haupt Conservatory home, surrounded by over a quarter-mile of G-scale train tracks.