Posted in Learning Experiences, People on August 28 2015, by Plant Talk

Allow me to introduce myself. My name is Ken Iwuoha. I am a SYEP (Summer Youth Employment Program) worker for the summer of 2015. I have worked for The New York Botanical Garden for over six weeks, with the Bronx Green-Up Program.

As an individual born and raised in the Bronx, I have adapted to buildings, construction, and pollution—the “City Life.” I used to think that planting a tree in front of your house was the best way of being green. After working for Bronx Green-Up, however, my point of view has changed completely. Donating plants and providing services to local community gardens and schools has opened my eyes to the beauty of the Bronx.

A Collaboration Thrives in the South Bronx

Posted in Learning Experiences on June 25 2015, by Ursula Chanse

Ursula Chanse is the Director of Bronx Green-Up and Community Horticulture and Project Director for NYC Compost Project hosted by The New York Botanical Garden. For more information about these programs and upcoming workshops and events, please visit Bronx Green-Up.

During the dry days of May, In Good Company, a collaboration of values-driven businesses spearheaded by Clif Bar & Company, brought together individuals from across the country and Canada to be put to work in the South Bronx. Two week-long service projects in early and late May took place at Brook Park, a thriving community garden bordered by schools and an accessible resource for learning and play in the urban outdoors.

In appreciation, Harry Bubbins, Director of Friends of Brook Park, had this to say:

“Thanks to the expertise and incredible support from the staff at Bronx Green-Up of The New York Botanical Garden and GrowNYC, along with the In Good Company consortium and all their company members and employees, we have entirely transformed our almost one-acre site here in the South Bronx. We are honored to continue to receive the support of Bronx Green-Up and the partnerships and resources they are able to leverage for community gardens like ours. Without them The Bronx would be a lot less green.”

In early March, I posted a primer on the Garden’s Citizen Science program, focusing on the biotic water quality testing workshops offered to visiting students at NYBG’s own GreenSchool. Presented in partnership with the New York City Department of Education STEM Matters, Citizen Science workshops aim to educate children from all five boroughs about ongoing, “crowd-sourced” scientific research that is accessible to amateur scientists and laymen alike.

Over the course of the month of March, I had the pleasure of working with the students of P.S. / I.S. 87 Middle Village as they sorted leaf packs, bravely handled and identified macroinvertebrates, and ventured into the Thain Family Forest in order to perform site surveys. Under the guidance of science teacher Ms. Vivian Alforque, sixth, seventh, and eighth graders were all given the chance to participate in meaningful scientific research on the grounds of our historic institution.

Now, on to what I’m sure you’ve all been wondering: which macroinvertebrates did we find?

Nurturing the Next Generation of Young Gardeners

A flock of migrating birds fly from one end of the Ruth Rea Howell Family Garden to the other, flapping their wings and erupting with birdcalls as they go. They’re migrating from New York to Mexico and back again.

There’s one in pink shorts, and another in a NYBG t-shirt. One in a sunhat swoops past a bed of lettuce. These “birds” are actually children participating in a nature activity in the Children’s Gardening Program.

One of them, young gardener Adena Zitrin, and her mother, Debra Asher-Zitrin, have participated in the Sprouts program, for kids ages 3 to 5, for the past two years.

“It’s unlike any class we’ve ever taken—and we’ve taken music, art, and gym classes,” Debra said. “There’s something very bonding that goes on between the parent and the child in CGP. It’s very sweet, the working together that goes on.”

Debra’s two older children also participated in Sprouts and are now Crafters, the program for kids ages 6 to 12.

“What is that?”
“What lives in there? Are they dangerous? Do they bite?”
And, loudest of all, “EWWWWWW!”

These are some of the many questions (and noises of disgust) hurled in retaliation to the dripping, mucky leaf pack I hold up at the front of the classroom. Water fresh from the Bronx River streams from the decomposing leaves into a bucket below, and an odor that could be described as either “earthy” or “gross” pervades the GreenSchool classroom. My charges for the next 90 minutes—a group of unsuspecting middle schoolers—want nothing to do with whatever is going on in that mess of organic matter. Little do they know that within minutes they’ll be clamoring to sort through the leaves and rocks and mysterious river sludge to find living treasures underneath…

Posted in Learning Experiences on February 2 2015, by Jeanne Lapsker

Jeanne Lapsker is a Forest volunteer at NYBG. 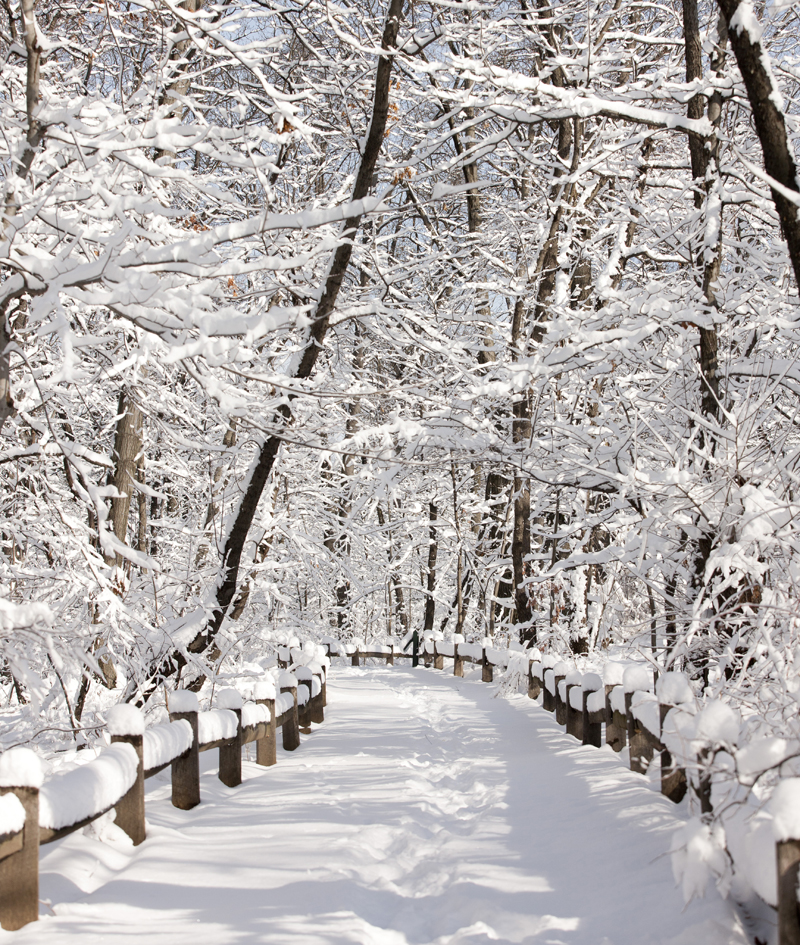 The leaves of the old rhododendron shrubs hang straight and stiff outside my window—the surest indicator of freezing temperatures. I dress in layers and head out to the forest in NYBG.

In the late 1800s Robert Louis Stevenson wrote, “It is not so much for its beauty that the forest makes a claim upon men’s hearts, as for that subtle something, that quality of air that emanation from old trees, that so wonderfully changes and renews a weary spirit.” Recently a friend posted an article about shinrin-yoku, or forest bathing, a term coined in Japan in 1982 that sparked my interest.

Shinrin-yoku was inspired by the ancient Shinto and Buddhist practices of letting nature enter the body through all five senses. For several decades now Japanese researchers have been studying the psychological and physiological effects of leisurely walking in the woods and breathing in the scent of old trees. They found correlations with stress and blood pressure reduction, improved mood, increased energy, improved sleep, increased concentration, and increases in the body’s immune cells. Now there are forty-eight designated forest therapy trails in Japan and shinrin-yoku is an accepted form of preventative medicine there. It is estimated that an astounding one quarter of the Japanese population use these forest trails. With increasing urbanization and use of technology, other countries around the world are investigating the potential health benefits of spending time in nature.

What we have long believed intuitively to be true regarding the benefits of spending time among the trees may in fact be linked to biological and chemical changes in our bodies. In the meantime, as I walk these paths in the Thain Family Forest, I smile to think that in other native forests under different native trees, others are walking paths, different yet similar, and experiencing a comparable sense of peace.

Passing It On: Food Growing Projects in Bronx Communities

Posted in Learning Experiences on November 25 2014, by Ursula Chanse 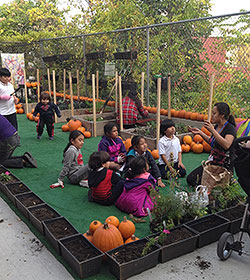 As the season comes to a close, vegetable gardens are put to bed and leaves raked up, Bronx Green-Up’s (BGU) Grow More Vegetables Certificate students have been finishing their volunteer hours and final projects throughout the Bronx.

Our Grow More Vegetables Certificate Series (GMV), taught by BGU’s Sara Katz, is an edible gardening course designed to equip community gardeners, teachers, and residents with the best organic techniques for growing vegetables safely and effectively. The program consists of six classes plus volunteer work at Bronx community sites where students can practice the techniques they have learned. As part of the course students design their own urban vegetable gardening project, which has two main goals: to grow more food and to pass on what students have learned to others in their community.

Posted in Learning Experiences on September 25 2014, by Ursula Chanse

Recently, on a sunny Saturday at Taqwa Community Farm in the Highbridge neighborhood of the Bronx, just up the hill from Yankee Stadium, we worked with Farm School NYC students (a program of Just Food) to prepare several areas for planting and sowing cover crops.

As we head steadily into fall, many of our warm season vegetable crops have slowed down, and at Bronx Green-Up, we start encouraging the use of fall cover crops in the community gardens, school gardens, and urban farms in the Bronx. Cover crops, also known as green manures, are not grown to feed the gardeners, but rather to nourish the soil. They are perfect to sow after pulling out your tomatoes, peppers, corn, and beans.

An Urban Farm Flourishes on the Grand Concourse

Posted in Learning Experiences on August 27 2014, by Ursula Chanse 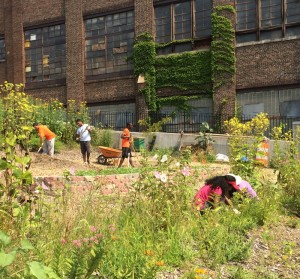 On a sun-baked day in July 2012, we stood outside a new vacant lot, completely sterile and void of any plant or animal life, but there was an urban farm to come…

The International Rescue Committee (IRC), an organization that provides critical services to refugees and asylees, had signed a lease with the NYC Department of Transportation, envisioning a new community farm to support their clients and also benefit the surrounding community. They asked for the help of our program, Bronx Green-Up, the Garden’s community gardening outreach program which has helped create community gardens, school gardens, and urban farms in the Bronx for more than 25 years.

There was promise from the start. On one early visit I bent down to pick up a plastic bottle near the entrance when I noticed a small piece of paper tucked inside—surely, it couldn’t be a message—but yes, the words asked if we were starting a garden, and stated that the person would be interested in helping out.

Posted in Learning Experiences on August 21 2014, by Diana Soler 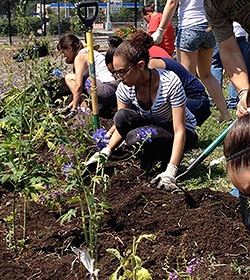 Growing up in the city, I wasn’t one to appreciate wildlife. I ran away from it. Tall buildings and concrete provided me with comfort. Seeing empty lots of land confirmed this attitude for me. They looked like restricted mini-forests, having fences around the perimeter with weeds and trash caged inside. It was almost as if these spaces don’t exist, as the urban life surrounding them doesn’t acknowledge the presence of nature and all of the mystical treasures it has inside.

Luckily, I was given the chance to see the light of these enchanted forests. While working for Bronx Green-Up (the community gardening outreach program of The New York Botanical Garden) as part of NYC’s Summer Youth Employment Program, I was exposed to community gardens that are being cared for and acknowledged by urban green thumbs. These once abandoned lots were turned into spaces where local community members can garden and establish meaningful relationships with both plants and people. The first task I am usually given when entering a new garden is to pull out weeds. I didn’t really know what I was doing at first. My common sense just told me to pull out the ones that look ugly, or that don’t quite fit in with the rest of the plants. Also, if there are decent-sized flowers on them, then those can stay.