Posted in Children's Education on May 7 2019, by Tai Montanarella 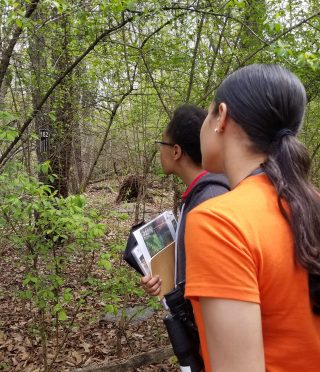 What does a Bronx high school student enjoying a spring break vacation today have in common with pioneering 19th-century American botanist John Torrey? If they participated in the week-long Gaining Early Awareness and Readiness for Undergraduate Programs (GEAR UP) Citizen Science Institute held at NYBG’s GreenSchool, they found at least one lofty commonality: engaging in scientific pursuits during leisure time.

It was during the capstone seminar with Esther Jackson, Public Services Librarian at the Garden, that they discovered this connection and other surprising ones. Esther shared the current work citizen scientists are doing transcribing The John Torrey Papers, an important collection of documents of Torrey’s correspondence, manuscripts, notes, and botanical illustrations held in the Archives of the Garden. Students learned from reading these historic documents how the scientist whose work collecting, describing, and classifying plant specimens from around the world wholly resounded with their own experiences over the course of their week across Garden grounds and beyond. More importantly, they came to connect how the rigorous work they engaged in might one day also hold historical significance to important contributions to science.

Posted in Children's Education on February 20 2018, by Arvolyn Hill

Arvolyn Hill is a GreenSchool Educator at NYBG. 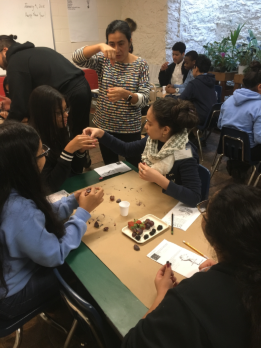 I love blueberries for their bold color, juicy texture, and delightful taste. When sprinkled on cereal or in pancakes, these common fruits add a healthy and sweet treat to most American diets. It was this flowering plant, part of the Ericaceae family, that eighth grade students from M.S. 244 in the Bronx set out to explore on the first of a three-day science institute held at the GreenSchool. As a new Educator learning about the variety of programs offered through Children’s Education, I got to tag along on their botanical adventure.

M.S. 244 is a partner with Gaining Early Awareness and Readiness for Undergraduate Programs (GEAR UP), a national initiative to increase academic performance and success for middle through high school students administered by the Bronx Institute at Lehman College. The Bronx Institute in turn relies on NYBG, which for more than a decade has provided its students with multidisciplinary experiences in the natural world and the unique opportunity to learn first-hand from Garden professionals in horticulture, education, and plant science.

Posted in Children's Education on February 6 2018, by Tai Montanarella 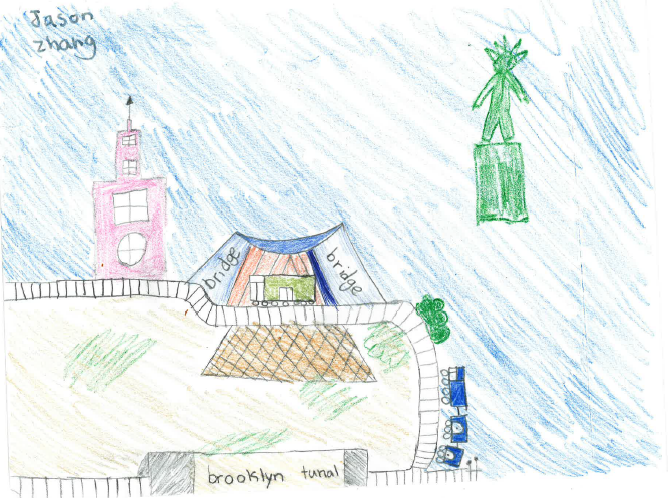 One of the rewards for leading plant science workshops at the GreenSchool in the Enid A. Haupt Conservatory for school groups is often the lovely drawings and letters of thanks we receive from students afterward. However, when we received the garden-inspired artwork of Mrs. Foley’s fourth graders from P.S. 107 in Flushing after they visited the Holiday Train Show in December, I knew from their drawings and writing that these were not just obligatory thank you notes, but recollections of heartfelt experiences.

Posted in Children's Education on October 11 2016, by Samantha Fletcher 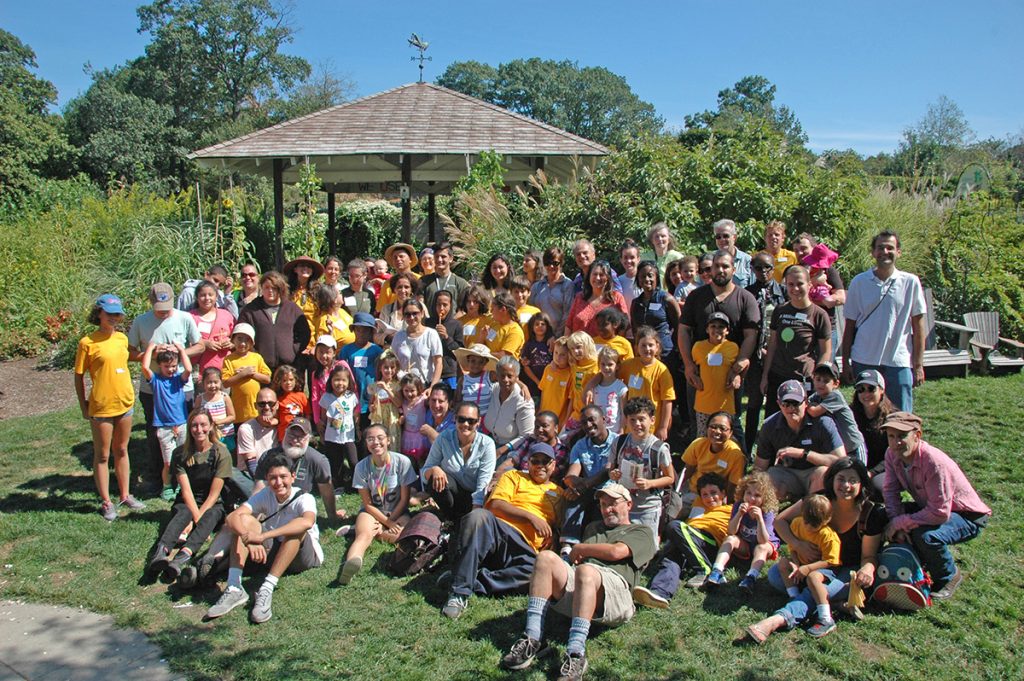 September 17th’s 60th Anniversary celebration of the Children’s Gardening Program gave us the touching experience to see current participants, alumni, and instructors come together to reminisce about old memories and to create new ones. We had the opportunity to interview a few attendees to learn the impact the program had on their lives.

Posted in Children's Education, From the Library, Shop/Book Reviews on March 4 2016, by Esther Jackson

B is for Bear is an alphabet book featuring plants, animals, and other ecological features in North America. The illustrations were created by cutting away black paper “to reveal the essential shapes and lines” of the elements of nature profiled by Viano. The “revealed” areas were then filled in digitally with subdued pastels. The result is simply beautiful. Examples of Viano’s work, including several illustrations from B is for Bear, can be seen on her website.

Upon opening the book, the reader sees one letter to a page, with the exception of “A” and “Z,” which bookend the collection with two-page spreads. Viano picks an eclectic set of organisms and concepts to illustrate, which makes reading the text unpredictable, echoing the adventures promised by the outside world. Each page includes an uppercase and lowercase letter in the upper left corner. The associated word, all in capital letters, appears in the upper right corner. An illustration dominates the central part of the page which finishes with a short, factual sentence about the plant, animal, or natural phenomenon depicted.

Because of its format and beauty, B is for Bear is appropriate for readers of varying ages. Very young readers might use the text to learn the alphabet, while slightly older readers—the young and the young at heart—can use the book to learn interesting facts about the natural world. This is a children’s book with artistic sensibilities, dedicated to “all of those who let children run a little wild” and appealing to all who are looking for a reason to be lured into an outdoor adventure.

*This collection circulates to Members and Volunteers

From the Casa Azul to the GreenSchool, Frida Inspires Students and Educators Alike

Posted in Children's Education on February 10 2016, by Plant Talk

Patricia Caracappa is a Spanish Teacher at Howitt Middle School in Farmingdale. 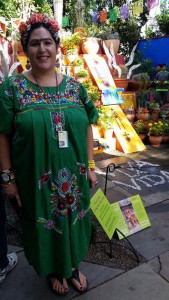 I am a teacher certified in both Art and Spanish who visited the FRIDA KAHLO: Art, Garden, Life exhibition on three separate occasions. As I experienced the show in three different ways during a five month period, both with my students and on my own, each visit left me speechless. Here I hope to give voice to my special experiences at the Garden.

My students at Howitt Middle School first experienced the rich offerings of Children’s Education programs related to the exhibition when FRIDA KAHLO opened in May. During the Poetry for Every Season: Mexican Poetry Walk offered by the GreenSchool, my 7th grade Spanish students were challenged to find the connections between the lives of two significant contemporary Mexican artists: the painter Frida Kahlo and the poet Octavio Paz. Examining the thematic images in Kahlo’s artwork and comparing them to the written themes they identified in Paz’ poetry—in Spanish, too!—my students discovered for themselves the significance of the specific choices artists make to communicate ideas they care deeply about both visually and linguistically. This facilitated program revealed seamlessly the artists’ close observation and symbolic uses of plants, their Mexican nationalism, and their deep appreciation for the natural world.

Posted in Children's Education on November 25 2015, by Celia Baldwin

Celia Baldwin is a GreenSchool Educator at The New York Botanical Garden. 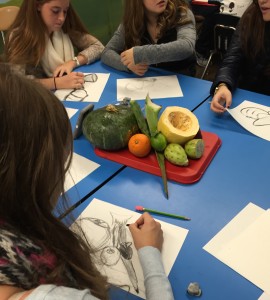 The Frida Kahlo exhibition that graced the Enid A. Haupt Conservatory from May until October offered visiting GreenSchool students an inspiring way to get inside the head of a wildly talented artist, and make some revealing connections—and art—of their own. As students entered the vivid Casa Azul and strolled alongside the shiny green Swiss cheese plants, smelled the sweet bougainvillea, and examined sunset-hued marigolds and sunflowers up close, they responded with smiles to the color, texture, and forms they noticed. When they saw the papaya-colored pyramid adorned with cacti and succulents, they looked closely, and tried not to touch. This was not some sleepy garden show their teachers were bringing them to, but something bold and fun and relatable.

On October 23, a group of students from Waldwick High School in New Jersey came to view the exhibition with Spanish teacher Vanessa Monell. Their goal was to immerse themselves in the living world of Frida Kahlo after being introduced to her life story in the weeks since school began in September. These high schoolers said they were drawn to Frida’s story of suffering and fortitude, of her strong need to define her life on her own terms and to find a way to communicate her emotional intensity through art.

In early March, I posted a primer on the Garden’s Citizen Science program, focusing on the biotic water quality testing workshops offered to visiting students at NYBG’s own GreenSchool. Presented in partnership with the New York City Department of Education STEM Matters, Citizen Science workshops aim to educate children from all five boroughs about ongoing, “crowd-sourced” scientific research that is accessible to amateur scientists and laymen alike.

Over the course of the month of March, I had the pleasure of working with the students of P.S. / I.S. 87 Middle Village as they sorted leaf packs, bravely handled and identified macroinvertebrates, and ventured into the Thain Family Forest in order to perform site surveys. Under the guidance of science teacher Ms. Vivian Alforque, sixth, seventh, and eighth graders were all given the chance to participate in meaningful scientific research on the grounds of our historic institution.

Now, on to what I’m sure you’ve all been wondering: which macroinvertebrates did we find?

Posted in Children's Education on June 15 2015, by Plant Talk

On a recent misty Saturday morning, I found myself boarding a Garden tram bound for the Ruth Rea Howell Family Garden along with 96 children enrolled in the Edible Academy’s Children’s Gardening Program for Crafters, an opportunity for kids ages six to 12 to experience gardening first-hand and to learn about the science behind plants and food.

Parents waved as their kids claimed their seats on the tram, one girl quickly asking whether her mom had packed her a change of clothes for later. She had, and told her daughter, “Have fun. Get dirty!”

The tram pulls away and steers us through low hills and around age-old trees until we arrive at the Family Garden. Eager children disembark and head toward the main garden gates, beyond which they gather with their small groups, divided by age.

It is in these small groups that they do special activities—learning about Gregor Mendel and plant genetics; writing in field notebooks they bound earlier in the program; and making crafts.

A Tale of Two Caterpillars

Posted in Children's Education on June 8 2015, by Joyce Newman

To the delight of all visitors, two giant caterpillar topiaries—dubbed Frida and Diego—have recently been designed and planted by NYBG gardeners, Diana Babbitt and Katie Bronson, in the Everett Children’s Adventure Garden.

“We thought it would be fun to try to make a Frida caterpillar,” explains Katie. “So we looked at a lot of her pictures where she is wearing flower headdresses and we tried to make one of those.”

Frida is filled with deep purple-red coleus punctuated by bright pink Zinnia elegans that contrasts with nearly black Salvia discolor on her body. Her raised head is softened by green ‘Round Leaf’ Hedera, and her eyes look straight ahead, portrait-style, under those famous bushy eyebrows.