A World Within an Island: Exploring the Many Habitats of Central Cuba, Part Two

Posted in From the Field, Travelogue on December 30, 2014 by Benjamin Torke

Benjamin M. Torke, Ph.D., is an Assistant Curator at the Garden’s Institute of Systematic Botany. His specialty is legumes, a large plant family that includes not only beans and peanuts but also hundreds of rain forest tree species.

Editor’s Note: President Obama’s recent announcement that the U.S. will normalize its relationship with Cuba has focused attention once again on Cuba, an island nation where scientists from The New York Botanical Garden have conducted expeditions and scientific research for more than a century. In this two-part series, a Botanical Garden scientist describes his recent two-week field trip to Cuba, part of an ongoing effort to discover and document the island’s richly varied plant life.

For the next leg of my August field trip to central Cuba, my colleagues and I traveled to the city of Cienfuegos on the southern coast. In Cienfuegos, we were joined by Julio León of the Botanical Garden of Cienfuegos, an expert on the flora of Cienfuegos Province. Julio took us to several highly productive collecting sites.

One of the most interesting habitats was the transition zone between a karst slope and a coastal mangrove swamp. Here we encountered one of the best finds of the whole trip, an individual of Behaimia cubensis, a very rare Cuban tree which is the only species of its genus. The evolutionary affinities of Behaimia are currently unknown, so I was very excited to collect material that could be used for DNA analysis.

From the Field: A Botany Lesson in Vanuatu

Posted in From the Field on December 11, 2014 by Stevenson Swanson 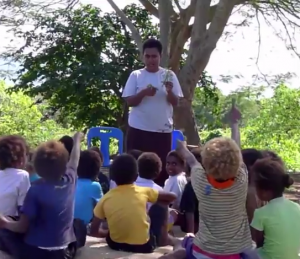 Of all the far-flung places that scientists from The New York Botanical Garden explore, one of the farthest in terms of distance and culture is Vanuatu, an island nation in the South Pacific with a population of about 225,000 people spread over 65 islands and speaking more than 113 indigenous languages.

With its remote location, Vanuatu is home to many plant species that are found only there, making it a treasure trove of biodiversity and an important source of materials for biologists to study. The residents rely on native plants for food, fuel, medicine, and more, but unlike some better-known Pacific islands, Vanuatu’s plant life and the traditional knowledge about how to use those plants have not been adequately studied.

Posted in From the Field on May 30, 2014 by Fabian Michelangeli

Fabian A. Michelangeli, Ph.D., is an Associate Curator of the Institute of Systematic Botany at The New York Botanical Garden. His research focuses in part on the evolution, identification, and classification of neotropical plants.

In my last post I recounted how my colleagues and I explored eastern Cuba, collecting different members of the family Melastomataceae. Only a dozen species in this group, which includes plants known as meadow beauties, princess flowers and Johnny berries, are found in the United States, but it is very diverse in the tropics. In Cuba, there are more than 200 species of Melastomataceae, and more than 150 of those are endemic, found only on that island.

Here are some representatives from the Sierra Maestra Mountains that we encountered on our expedition. Most of these species are adapted to the cloud forest conditions of the mountains.

Understanding the Past and Predicting the Future of a Biological Hotspot

Posted in From the Field on March 17, 2014 by Fabian Michelangeli

Fabián A. Michelangeli, Ph.D., is an Associate Curator of the Institute of Systematic Botany at The New York Botanical Garden. His research focuses in part on the evolution, identification, and classification of neotropical plants.

With their rich diversity of species, including many found nowhere else, the Atlantic forests of eastern Brazil constitute one of Earth’s biodiversity hotspots. They demonstrate a truly unique set of environmental, geological, and biological conditions. But because of rapid population growth in the region and more than 400 years of continuous deforestation, less than 11 percent of the original forest area still exists.

To understand how the coastal forests developed and what could happen to them in the future, an international team of scientists spanning many disciplines met in Brazil last month to begin work on a new research project that could help in efforts to conserve what remains of these ecological marvels. The goal of the project, which is expected to last five years, is to study the conditions that led to these high levels of biodiversity and localized species and to develop models to predict what may happen to that biodiversity in light of further habitat destruction and climate change.

William R. Buck, Ph.D., is the Mary Flagler Cary Curator of Botany at The New York Botanical Garden. For the last three years, Dr. Buck, a moss specialist, and a team of colleagues have journeyed to the Cape Horn region at the southern tip of South America, an area rich in moss species.

Yesterday the engines started at 5 a.m., and we began our trip back to Isla Stewart, heading for the eastern end this time. Although the engines wound to life early, it is never quiet on the ship, thanks to the generator. It is always running, supplying power to the dryers we use to preserve specimens. Nevertheless, there is a significant boost in decibels once the main power plant starts up.

Posted in From the Field on November 18, 2013 by Matt Newman Getting there is half the fun, unless you’re trekking into remote wilderness. With scientists such as Wayt Thomas, Ph.D., hoofing it into some of the most remote and unforgiving locales on Earth, it’s not surprising that their expeditions occasionally hit snags. Dr. Thomas is the Elizabeth G. Britton Curator of Botany here at the NYBG, and his focus on the flora of northeastern Brazil often takes him to deep, rugged forests where roads are a luxury, if not a pipe dream. But as seen below, the hassles are worth it, especially when species diversity is at risk. Dr. Thomas is working with plants found nowhere else in the world, an effort that has a two-fold benefit.

In the course of documenting these plants in Brazil’s Atlantic coastal forests, he and his team are also determining which species provide food and shelter for endangered and increasingly rare bird species also found in the area. With time, Dr. Thomas and his colleagues hope to uncover the relationships between plant and animal, which will allow scientists not only to track the location of these avian populations more easily but also to recommend specific reforestation plans to support these vanishing birds.

Of course, Dr. Thomas isn’t the only one roughing it in the field. Stay tuned to Science Talk for more adventures involving our globetrotting scientists.