Posted in Bill Buck, From the Field, Science on February 12 2011, by William R. Buck

Yesterday was a busy day and I didn’t finish working on my specimens until 10:30 p.m., at which time I just wanted to hit my bunk, not my notebook! The day before yesterday we worked in a beautiful wet forest and we all collected lots of specimens, almost all of which were saturated with water. Not surprisingly, we’re baling in more collections than our drying system can handle, especially with five bryologists in the field. Most collections take about two days to dry on the lowest rack and longer on the upper shelves. At this point we all have wet specimens awaiting dryer space. And it certainly didn’t help that I made almost 100 collections yesterday.

After awhile I am sure that all these places are starting to sound the same to you, especially since you are not here. 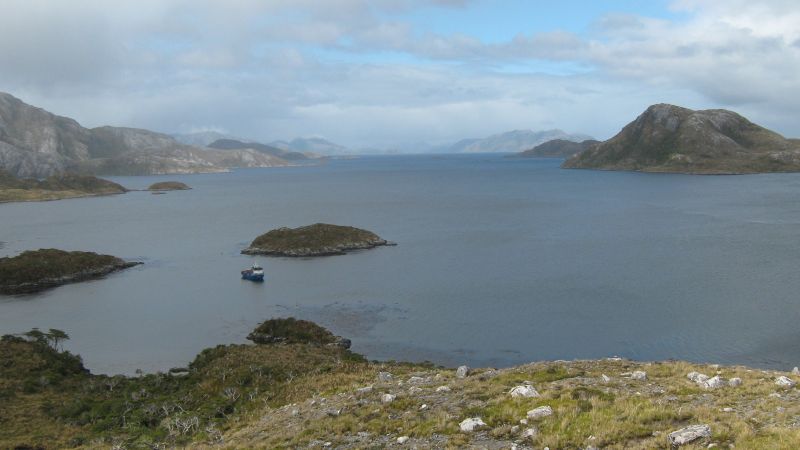 Quite honestly, at this point, many of our sites are even beginning to merge in my mind. I can distinctly remember the moment when I collected a moss and what the microhabitat looked like, but on which island or in which sound I found it is another story entirely. I assume that this will only get worse in the upcoming days because we are now hitting various sounds that go into the southern shore of Isla Grande (i.e., the large island) of Tierra del Fuego.

Yesterday afternoon we stopped at our final two small islands. We anchored in the canal separating Isla Brecknock from Isla Macías. The last time we divided our group between two islands Jim felt he got the less interesting island and so this time I let him pick first. He and Matt chose Isla Brecknock because it is the larger of the two islands and had a nice waterfall descending near where we were. Blanka, Kimmy, and I took Isla Macías. 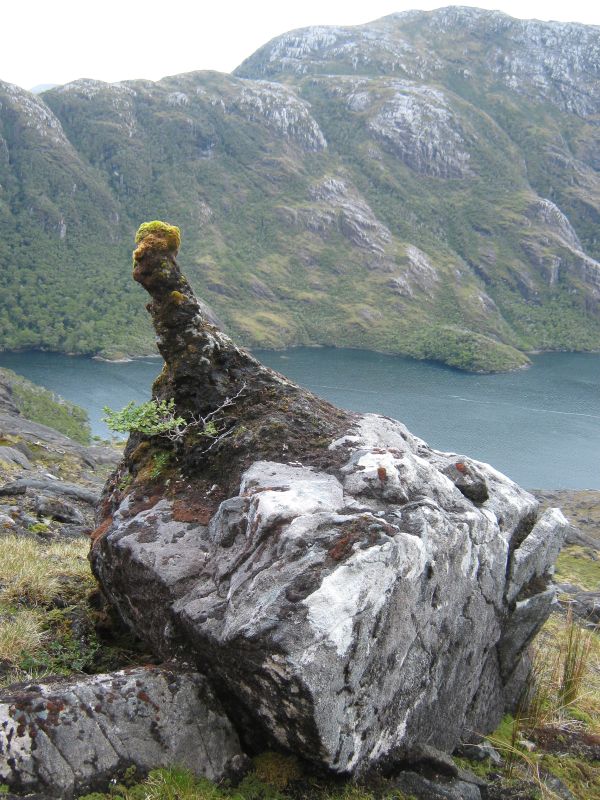 Yesterday seemed to be a day full of powerful impressions, and that continued today. As we brought the zodiac up to the shore of Isla Macías, I was impressed by how clear the water was; it was more like fresh water from a spring than salt water. It was crystal clear. All the various marine life–innumerable kinds of algae, mussels, limpits, and small jellyfish, as well as smaller numbers of crabs and starfish–could be seen. I don’t think we suddenly entered an area with clearer water, but rather that it is probably weather-related (isn’t everything here?!). Yesterday was a glorious day for this part of the world: There was only an occasional breeze and often the air was completely still. We saw more blue sky yesterday than we have since the trip started, and it only rained and sleeted a little bit as banks of clouds passed rapidly overhead. The weather was even more changeable than usual, and often we would go through a cycle of sun followed by light precipitation six to eight times an hour. We all still marvel at the constantly changing scenery. No five-star hotel could offer better views, especially views that change a couple of times a day. 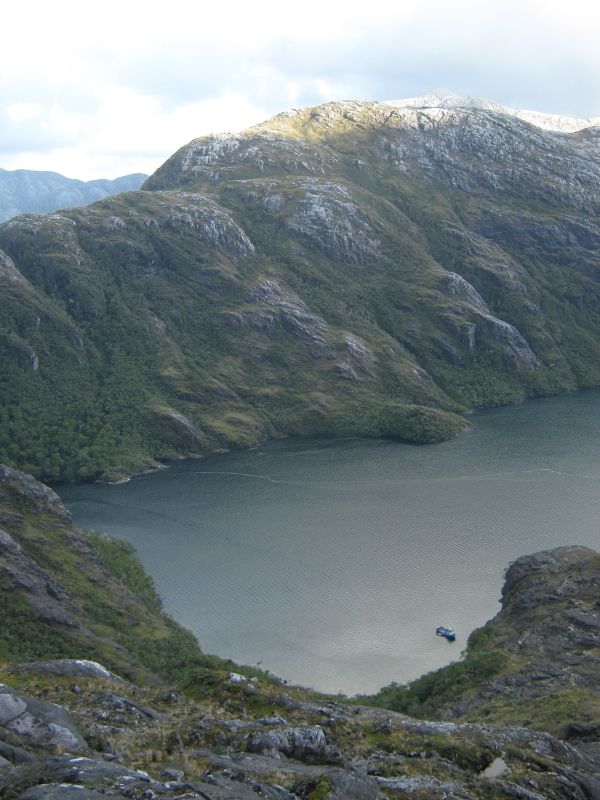 Yesterday it also seemed to impress everyone on the same day just how we have come to love our little ship. Sure we’re packed into small bunks in an unventilated bunkroom, and there is hardly a place inside where you can stand up without hitting your head, and the single bathroom (for 14 people) is only a small sink and a toilet. But, despite all these things, our little ship has everything we need for fieldwork and you can’t help but be impressed by it seaworthiness and how helpful and good-natured the crew is. Blanka went from having a negative attitude about ships in general to now thinking how much fun they can be. Jim and Matt are both impressed that, despite the cramped space, we have just about everything we could want in the field. And even bathing is possible if you ask the cook to heat a pot of water for you and you pour it over yourself in the bathroom. I couldn’t be happier with how everyone has adapted to, not only the frequently inclement weather, but also the social situation with the crew and other scientists. Our only regret is that we only have two more days of collecting in one of the most beautiful places on Earth.

This morning we moved to a new sound; unnamed, like so many. When we came out onto the deck we stood and stared: mountains rose to the sky all around us and the tops had a lingering veil of mist; a thin band of forest hugged the cliff bases on either side; at the end of the sound a huge waterfall cascaded down the mountains into an almost impenetrable old-growth southern beech forest. If we thought the forest at Seno Courtenay was nice, this one seemed almost out of a fairy tale. Because decomposition here is very slow due to the long winters and cool summers (it is summer here now, and most of us are wearing four or five layers of clothes in the field), fallen trees remain in place for decades on end, and become completely encased in bryophytes and ferns. 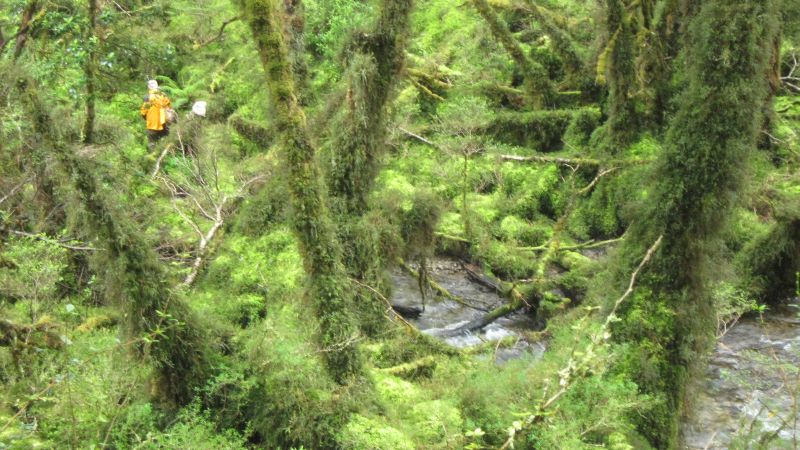 To get through the forest you climb atop one fallen tree and its cushion of liverworts and filmy ferns, and then another, and yet another. The actual ground is usually four to six feet below you and since you don’t really know exactly how rotten any log is, in order not to fall and break a leg, it often requires sitting on one log and slowly moving to the next, like finding yourself in a game of giant pick-up sticks. Most of the logs are well over a couple of feet in diameter, not a small feat in a climate where growth is slow at best. Even when just trying to move through the forest without stopping to look around (a task I find impossible), it takes a good half an hour to move about 100 yards or so. I have never seen or been in a more impressive forest.

As we were returning to the ship in the zodiac, despite being completely drenched from the wet vegetation and light rain, we were entranced by the pod of dolphins accompanying us, just inches from the zodiac. We all sat there grinning like idiots rather than worrying about any physical discomforts.

Tomorrow we move to Seno Aragay at the south side of the isthmus that delimits the Brecknock Peninsula. We were on the north side of the same isthmus just last week and so this gives us a feeling of being connected to the area.