Posted in Bill Buck, From the Field, Science on February 13 2011, by William R. Buck

As we awoke in Seno Aragay, at the isthmus of the Brecknock Peninsula, a steady, cold rain fell. At least it wasn’t windy.

After a hot breakfast of freshly fried bread, we suited up in our rain gear and headed into the field. Due to the weather we decided three hours in the morning would be about all we could tolerate. Jim and Matt headed in one direction while Blanka and I headed in another. As I came to the summit of a rise I saw Juan and Kimmy being dropped off near the base of a waterfall. As I wandered over the terrain, I desolately picked up the standard mosses just to document their distribution. I got wetter and wetter and colder. On this next to the last day in the field, as we get nearer and nearer to heading home, it was proving hard to get up much enthusiasm as my hand-lens became useless as it was constantly fogged up. When I realized I still had almost two hours left before being picked up, I headed to the base of a dripping cliff. 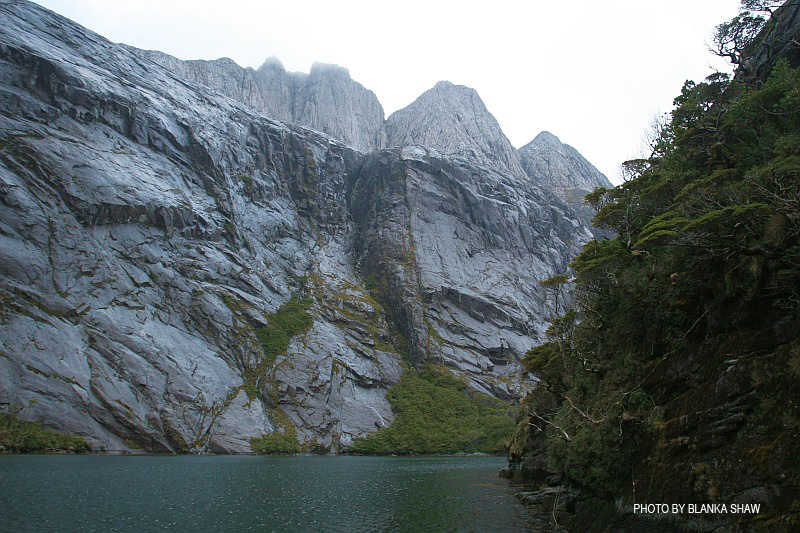 Upon arriving there, in no time at all I completely forgot about being cold and wet. Instead I was focused on the mosses that grew in sheltered areas under rock overhangs. Here they get less rain (even though, in addition to the rain I was continuously being dripped on from the water running off the cliff) and so i found a completely different suite of species. A couple of these were ones I had not seen before on this trip and I became completely oblivious to my physical discomforts. 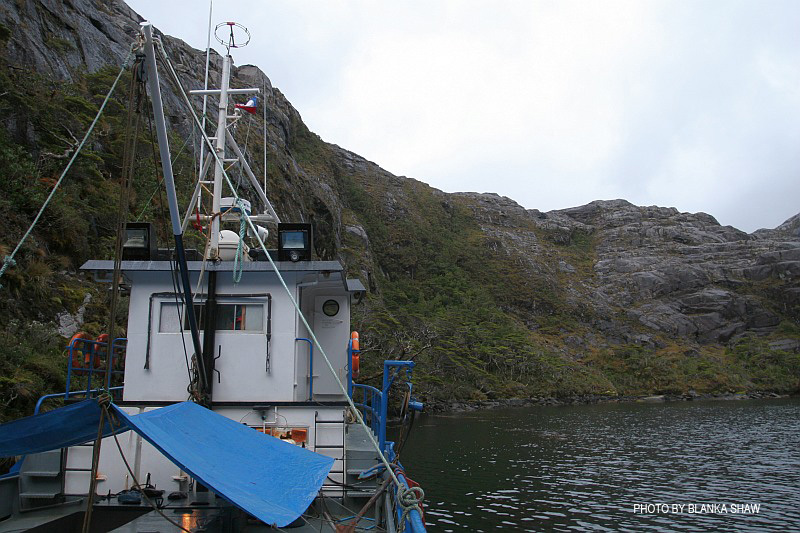 I finally saw Blanka on a slope below me and I called to her to come up to where I was. Like me before her, she looked pretty miserable, at least until she got to the cliff base. Instantly her excitement grew as she found liverworts she hadn’t been seeing elsewhere. Quite quickly, Blanka’s promise of only staying there for 10 minutes grew to over 30 minutes. Ultimately, we had to leave to get down to the shore, far below, for our scheduled rendezvous with the zodiac. We were the last to get back to the ship and so the engine room, where we hang wet clothing to dry, was already packed. However, having this space to dry clothing is a godsend; in only a few hours the wettest piece of clothing is dry and warm. 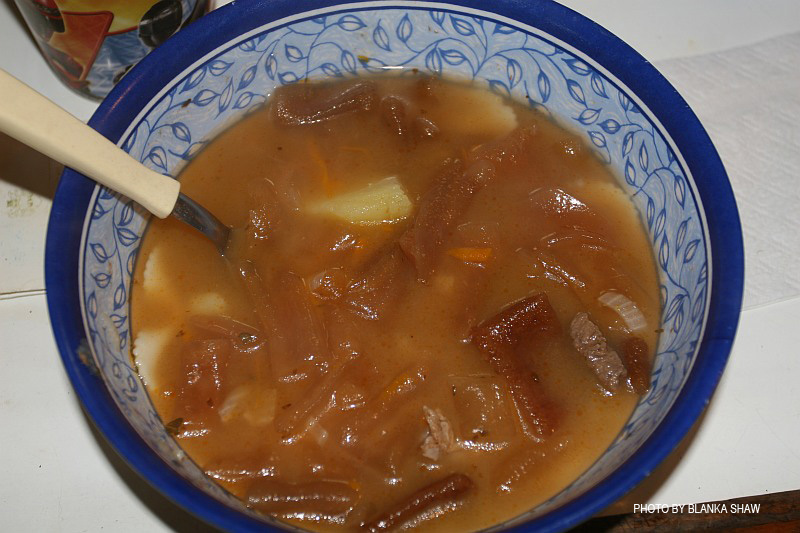 And then it was lunchtime. I had kind of been dreading lunch today. Throughout the trip I had noticed that on a shelf above the stove  there was a package of dried kelp. On a previous trip we we were fed this seaweed on most days and I have come to think of it as only marginally edible. I saw this brown kelp, locally known as cochayuyu, soaking last night, so I knew it was coming. Sure enough, in today’s soup at least half of the solids were this nasty kelp. After a couple of bites of it, I ate around the rest of it. Fortunately, Blanka seemed to actually like it, with its oddly gelatinous texture. Perhaps it was more of a novelty to her, but it meant I had a place to dispose of it from my bowl, by pouring it in hers.

In the afternoon the cold, steady rain continued unabated and no one was anxious to put their wet field clothes back on and head out into the field. However, where we are currently anchored is incredible. All around us sheer cliffs seem to go straight up to craggy peaks, with only small bands of forest sandwiched between the cliff bases and the sea. Dozens of waterfalls cascade down the cliffs, at least some of them ephemeral but falling today with all the rain. We’re all hoping that “Tomorrow, tomorrow, the sun will come out tomorrow.”

Tomorrow is our last field day. We’re heading to a couple of sounds on the southern coast of the Brecknock Peninsula. After that we have about a 14 hour ride back to Punta Arenas, much of which we’ll do at night.