Posted in Bill Buck, From the Field, Science on February 14 2011, by William R. Buck 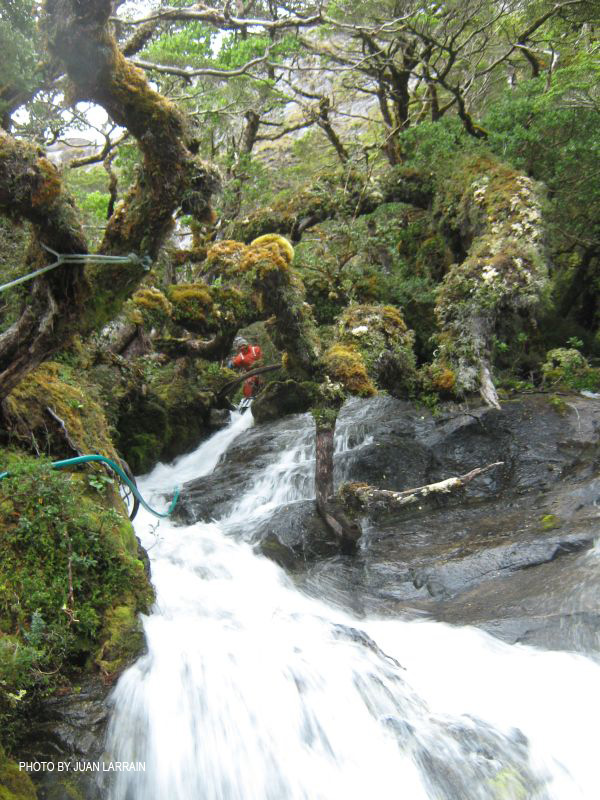 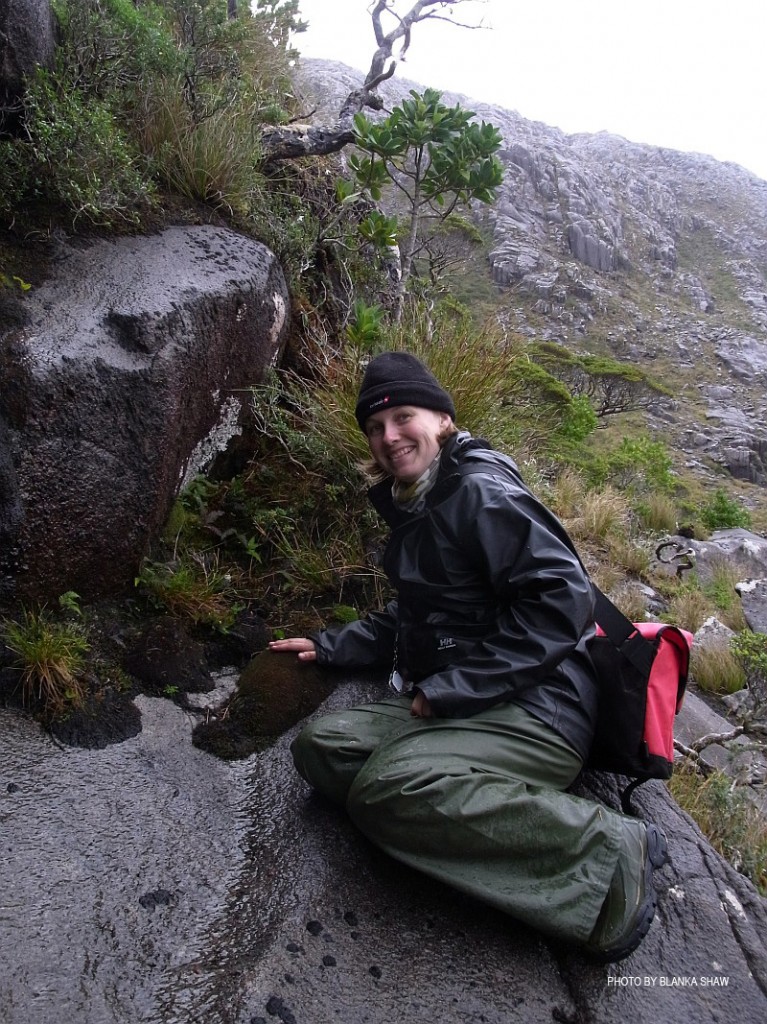 On the morning of February 6, we arrived in Seno Término, an appropriate name for our last day in the field. The weather mirrored our reluctance to finish such an amazing expedition. The skies were heavily overcast and a constant light rain fell. It seemed reasonable that our last day in the field would be a wet one, like so many before it. Seno Término runs, more or less, east-west, meaning that where we anchored was quite choppy. Across the sound, where there was a less substantial barrier to the wind, sheets of rain flew by one after another.

Despite (or maybe because of) the weather, no one wanted to stay out of the field today. I chose a small band of forest at the base of a granite mountain; at least in the forest the wind is much less. Time zoomed by as I worked back and forth through the forest, reaching and ascending the lower parts of the mountain whenever I could. Even at this late date, with so many sites under our belts, interesting mosses continue to be found. I realized that here, on this last day, I had finally gotten in shape so that climbing a hill didn’t make me out of breath. Talk about a day late and a dollar short!

At lunchtime we moved to our final collecting site, Seno Ocasión, opposite Isla Aguirre, where we had visited earlier. The cold rain persisted, but what was really dampening our spirits was the realization that our expedition was all but over. 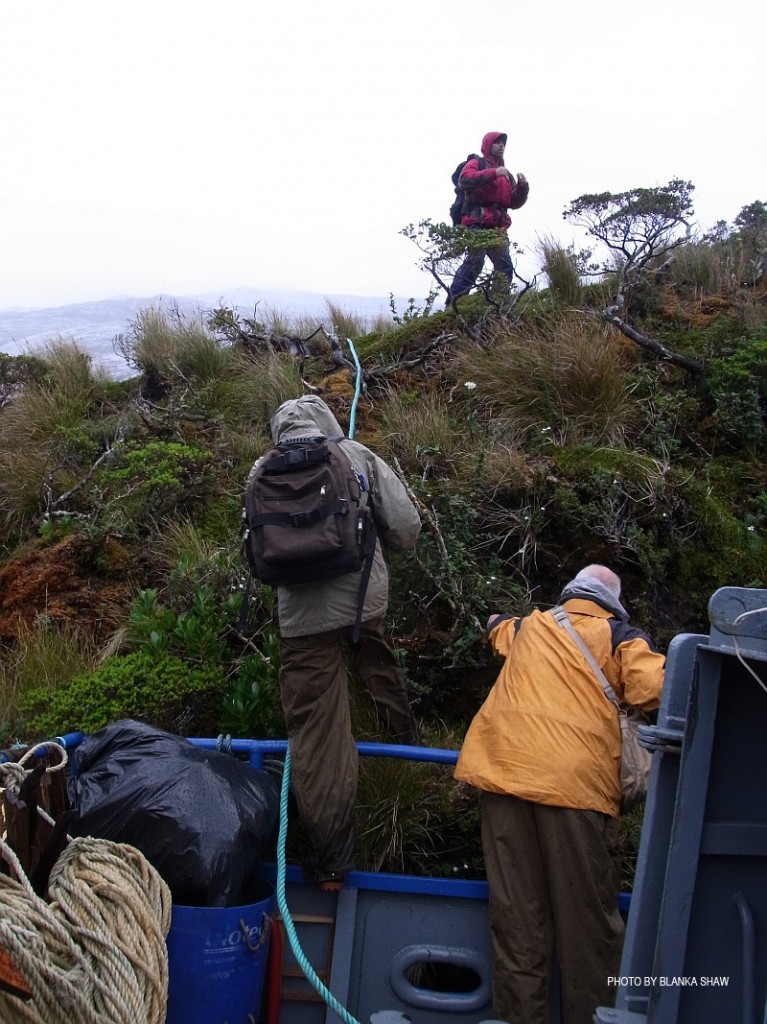 The ship was tied to a rock wall and we were able to just jump ashore and begin our collecting. The destination-oriented collectors ran ahead in an attempt to reach a nearby rocky peak. Apparently in these exposed areas the wind was fierce and prevented much progress. On the other hand, Kimmy and I hadn’t made it far from the ship when I spotted a steep ravine that ran right down the sea (which the others had run past). It was wet and slippery, but it’s always harder going down than climbing up, so we decided to chance it. At times I had to remove my collecting pack and leave it behind in order to fit onto narrow ledges that I wanted to access. In the end my efforts were rewarded with a moss no one on our ship recognized. Having to crawl backwards to get off the ledge was a small price to pay. 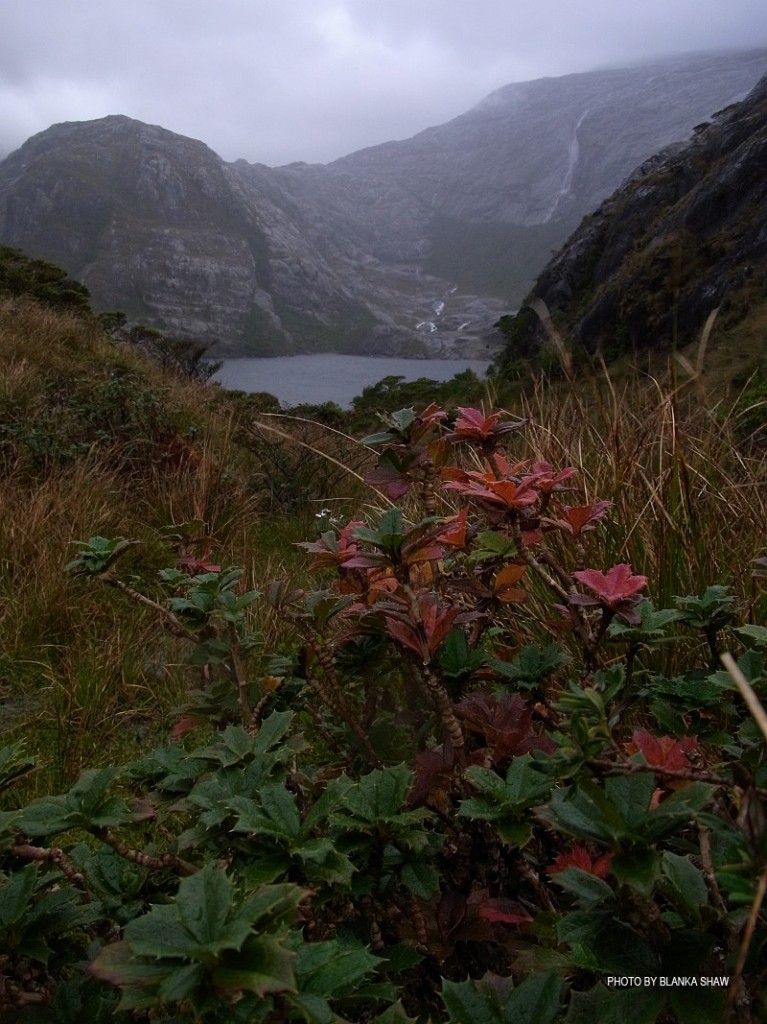 As Kimmy and I were working our way down the ravine, she told me that prior to our trip she had been tending toward going into entomology in graduate school but now was more interested in mosses! It’s always great to get a new convert! I had been interested in insects as an undergrad, too, so I was certainly sympathetic to such a career. However, neither of us were comfortable killing so many insects and how it was okay to kill invertebrates but somehow vertebrates were different. For me no one species is inherently “better” than any other and so the evolutionary addition of a backbone shouldn’t determine if it is acceptable to kill another species. (We were the only two vegetarians on the trip, and that may have had something to do with our common concerns.) I even feel this way about plants and although I collect (and thus kill) many mosses, if I pick up a moss and decide not to keep it, I always try to replace it, as a kind of good karma. I figure collecting a moss means that although it will die, it does so to enrich the heritage of The New York Botanical Garden! After working through the ravine we were both pretty wet and muddy and decided to call it a day. It was also so overcast that, even though the sun wouldn’t set for another three hours or so, the low light made it hard to see (not to mention the continuous rain on my hand lens). 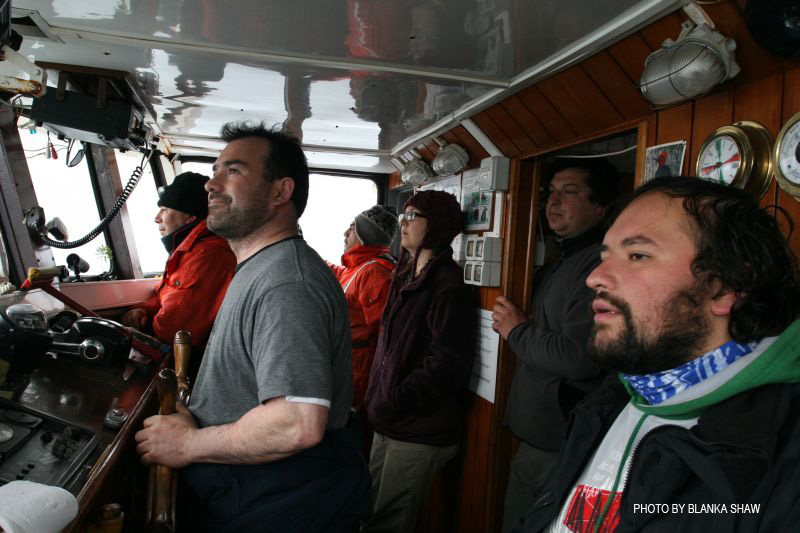 We didn’t want to arrive back in Punta Arenas until about noon because our hotel wouldn’t have our rooms ready before then. However, I’m sure the crew were anxious to get home to their families; therefore it wasn’t surprising that we began our trip home about 8:00pm. In short order we hit rough seas as we rounded the Brecknock Peninsula where we were in a direct line with Antarctic weather. By now, though, most of our group had developed their sea legs and did just fine without seasickness medication. Rough seas or not, there was no party-like feeling associated with our last dinner on the ship; knowing our field time was over dampened the atmosphere. 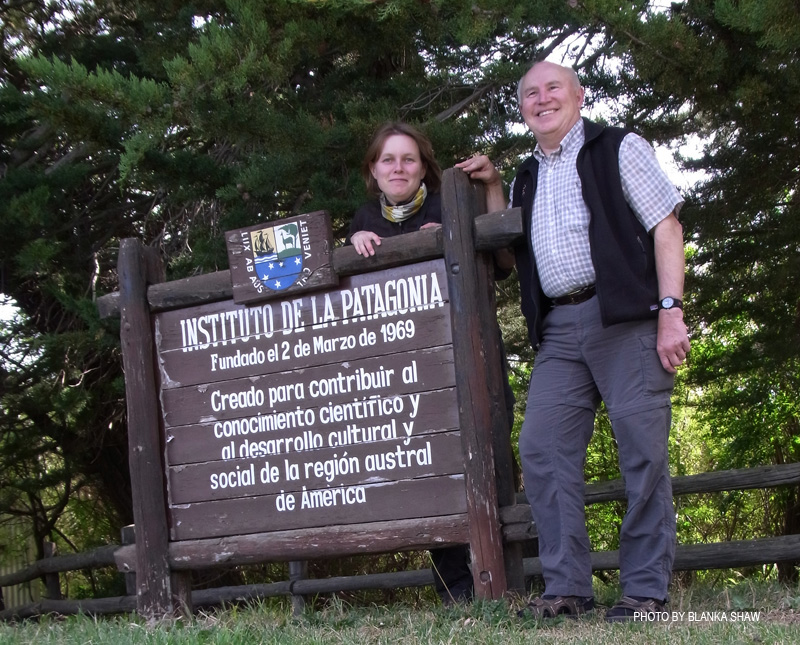 When we awoke we were not far from Punta Arenas and before you knew it, we had pulled up to the dock. It took an hour or so for us to unload our specimens from the dryers. And although the Pelegrín is a small ship, it was still amazing how everyone’s belongings had become scattered all over the ship: A stray sock here, a single wet boot there, a still damp raincoat crammed in some corner. Eventually though all the collections were miraculously fit into a single car and taken to the Instituto de la Patagonia, while we and our luggage went to our hotel. By now we were loyal customers and were greeted like long lost friends. None of us could wait to take a hot shower after about 10 days at sea with no bathing facilities. 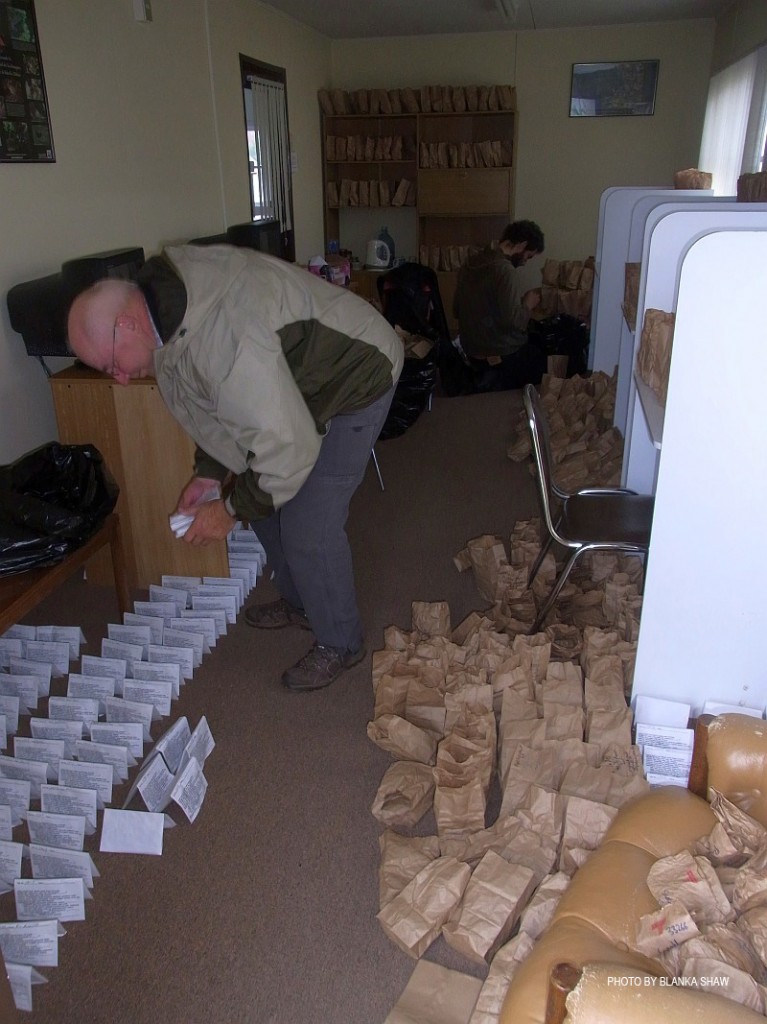 After lunch we went out to begin the long process of getting the last days’ collections dry and packing them up to ship home. We initially bought a dozen large boxes to pack the specimens in, but bought another eight this morning. I’m still not sure it will be enough. And we still have to get export permits from the Chilean equivalent of our USDA (the SAG), which will cost about $20-25 per box. The shipping costs will be even more per box. But, it’s only money and the collections themselves are essentially invaluable because we could never find the exact species again. And I already have a notice from the National Science Foundation telling me my first year’s report is due.

And I sure do have a lot to report! It’s hard to imagine a more successful trip. Everyone got along, the crew were more like friends and colleagues than employees, and no one was seriously injured; a real concern when working in such a treacherous landscape. Those of us coming back next year (actually late 2011) are already looking forward to it, and those who were only scheduled for this one trip are looking for ways to come back again. It’s said that if you eat calafate (the thorny barberry shrub–Berberidaceae Berberis buxifolia–so prevalent in the area and which I am constantly reminded of by all the small puncture wounds in my hands), you will return to this region again. We may not have eaten many of the berries, because most were still green, but all the bloodshed must count for something, and I know, at least for me, I’ll definitely be returning to one of the most spectacular areas of the world.

To support Bill and the Garden’s other scientists in their plant science research efforts, please donate now and help support these expeditions and studies.