From the Field: Bill Buck in Cape Horn, Day 4

Posted in Bill Buck, From the Field, Science on February 3 2012, by William R. Buck

After yesterday‘s late night, we were all slow to rise this morning. Which turned out to be okay, because at around 5:30 a.m. the crew decided to move to our next site; the movement of the ship was all the incentive we needed to sleep in.

When the ship stopped we got up for breakfast. Today’s first site is–like yesterday afternoon’s site–on Isla Gordon. From the map this site appears to have a glacier-fed stream that enters the sea near the end of a small sound, and this is indeed what we have found. But what we couldn’t see from the map is that the glacier is over the rise of a tall, steep slope, and after yesterday’s exhaustion, there wasn’t much enthusiasm for such a climb. So most of us chose to collect specimens on a relatively flat Magellanic tundra.

About halfway through the morning I reached a point where I could see a large cliff face only about a 10-15 minute walk away. So, instead of heading for a forest I had been eying, I struck out for the cliff. As soon as I arrived, I knew I had made the right decision; I immediately started finding interesting mosses. The cliff face was mostly wet, but in certain places, over-hanging rocks created little dry areas, and these dry areas were host to a whole different suite of mosses. 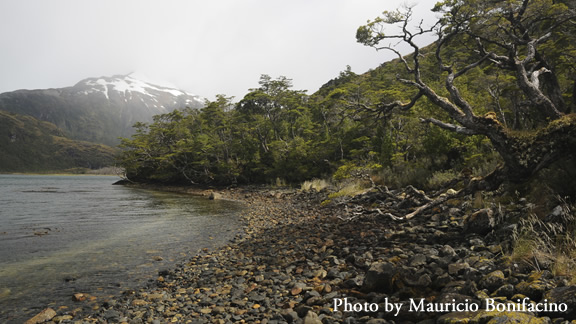 The next thing I came across was a bit of a surprise: A medium-sized tree that had recently been gnawed down by a beaver. Beavers are an introduced, invasive species that are causing extensive damage in the region because they have no local natural enemies.

Mink–similarly released after having been initially imported by the fur industry–are also causing havoc with local bird populations by feasting upon their eggs. Both species are spreading at an alarming rate, and, unfortunately because the climate here is so different from the animals’ native ranges, the fur is less desirable–and thus the industry abandoned.

Lunch was a bit late today, but because of that I was able to get the morning’s collections numbered before heading out to the afternoon’s site. I am trying to get back into a routine of numbering my collections immediately upon returning from the field.

This afternoon’s site was once again chosen from a map rather than from personal experience. The map showed a river draining a series of three lakes. I slowly trudged up the hill and when I reached the summit I could see a small lake below me. Even though a number of our group were ahead of me, I could see no one. I worked down to the lake and saw a dripping cliff face that drew me to it. I spent a good hour and a half collecting along the cliff and found many interesting species.

However, I was puzzled that the map showed three lakes, but I could only see one. So, I climbed another hill to survey the area. From there I could see the drainage of my lake down to the sea, but no other lakes. It turns out that to have seen the other two, larger lakes, I would have needed to climb the rise on the other side of my lake. Oh well! My new found aerie was useful though, because I noticed that far in the distance I could just see the pile of bright orange life jackets we had left on the shore. This made me realize that they were a very long way away, and so I started heading towards them right away, working down the outlet stream from the lake. My progress was slowed by the numerous bryophytic sirens that called me down to the stream. However, I was still the first one back at the meeting point.

Once we were all back on board, our captain turned the ship toward tomorrow’s collecting site, Estero Fouque. This long, narrow sound has numerous glaciers along it. Tomorrow we should be collecting immediately adjacent to these glaciers. I doubt anyone will sleep in tomorrow morning!