From the Field: Bill Buck in Cape Horn, Day 7

Posted in Bill Buck, From the Field, Science on February 8 2012, by William R. Buck

Last night, as we rounded the west coast of Isla Hoste around dinnertime, we hit the roughest waters of the expedition, and our meal was delayed by several hours. Our destination had been a secluded sound on the west coast of Isla Hoste, but we ended up spending the night tied-in at Bahía San Jorge on Isla Whittlebury. I was told that we would be able to get to our desired destination, but it would have to wait until day because the waters were too shallow to navigate at night. 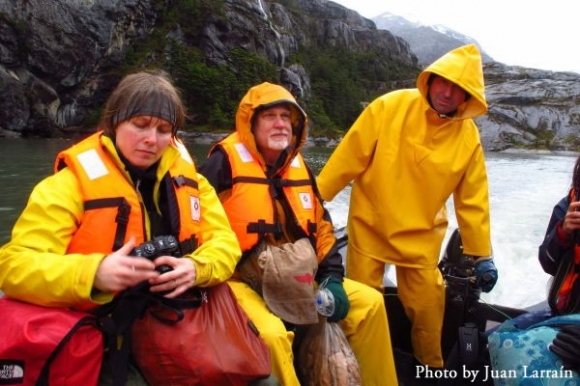 I had previously explained our itinerary to the captain, so he suggested that we just flip-flop our intended destinations. The engines started up in the pre-dawn hours and we arrived in another spectacular site, at the end of (yet another) unnamed sound on the north side of Estero Webb. Once again we found ourselves surrounded by glaciers, and since it had been raining regularly for the last day or two, the number of waterfalls coming from the cliff tops had increased exponentially.

I chose to go to an area of large rock outcroppings near the base of the glacier. Once I had ascended the rocks, a glacial lake with several large icebergs floating in it, came into view. I just stood there, completely awestruck by the magnificence of the view. The shade of blue of the glacier in the fleeting sun was enough, in itself, to hold my attention. Surrounding the glacier were bright orange rocks–orange because of a solid covering of a common lantern moss, Acroschisma wilsonii. The effect of the rocks next to the glacier recalled the colors of my alma mater, the University of Florida. When I saw Xiaolan coming up the slope I called to her to come see the view as well. When I tore myself away from the view, I found that the  mosses were reminiscent of those from Caleta Coloane, but not quite so diverse.

Not surprisingly, with so many of us collecting, and with such rich habitats, the dryers are starting to backup. As a consequence I have decided to try (not always with complete success) to avoid collecting the most common mosses, instead focusing solely on rarer species, and only in quantities that can dry quickly. It will mean my collection will be less complete in the distribution of the common species, but it is a small price to pay for high quality specimens of interesting species. Some of the others have also adopted this strategy, while others seem oblivious to the problem; loose specimens can be found everywhere, often under foot. 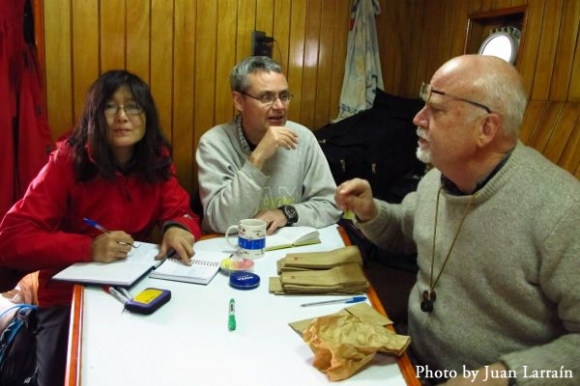 Previous to this trip, I knew a few of my companions quite well, but most of the others I knew only from brief encounters or through correspondence. Now, after several days in close quarters, I am becoming aware of various personality quirks, and, fortunately, none of these quirks are strongly annoying! By knowing these I am less likely to find them irritating and it is important to me to remain good-natured throughout the expedition.

This afternoon’s collecting was not particularly exciting, but it gave us an opportunity to collect in a forest habitat, rather than the glacial boulder fields of the last couple of days. Now, as I write, we are at sea again, though I am not sure exactly where we’ll anchor for the night. I showed the captain where we would ideally like to go tomorrow, and he promised that he will do what he can, based on sea conditions. At the very least we will likely visit another glacier tomorrow. I would like for us to visit one of the smaller islands, but weather and the seas are our masters here, and we can only do what they allow.