From the Field: Bill Buck in Cape Horn, Day 14

Posted in Bill Buck, From the Field, Science on February 24 2012, by William R. Buck

This morning we collected in Brazo Inutil (approximately 54º58’S, 69º49’W). The day began with patches of blue sky and the promise of a nice day, but it was colder than it had been recently, which I should have known signaled a change in the weather. The collecting wasn’t great, but I know at this stage that I have seen and personally collected much of the flora, and so have to fight surrendering to boredom. Most of my time has been spent looking for mosses and I have not really paid great attention to lichens. NYBG now has three lichenologists, as well as a new lichen graduate student joining us soon. My colleagues at the Garden, as well as various researchers outside of my home institution, have asked me to be on the lookout for certain groups of lichens, and I have decided that now is the time for me to do so! Once I have found what mosses I can at any site, I then devote some time to looking for lichens.

Lichens are not a real strength of mine, but definitely an interest (especially when I have others to identify them!). Add the fact that this is an area that is not well collected for lichens, and suddenly I have a whole new field to captivate me. Since yesterday, every site I have visited has yielded at least a few lichens that have really excited me, things I have never seen before and that look, to my untrained eye, really interesting. And just to make it really exciting, the Spanish lichenologist, Leo Sancho, told me that he has a manuscript of the lichens of the region, and so it means that any interesting finds of mine might be able to be added to the projected lichen biota. What more could a field biologist ask for?!

A quiet moment at Brazo Inutil 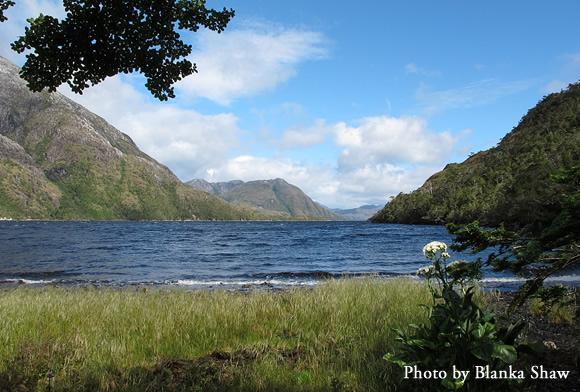 This afternoon we moved to the Garibaldi Fiord, our next to last glacier site. Rather than collecting close to the glacier, though, I chose to collect on a small island in the fiord, in the hopes that the increased humidity would increase moss diversity. Unfortunately, such was not the case. Nevertheless I did find a couple of nice things, even if they are not new to our flora region. Blanka–with Juan and Ernesto–went nearer to the glacier and seems to have found something I don’t recognize. I think it is in a family, Pottiaceae, that I do not know well, and I hope it will prove interesting. However, it will require dissection and a compound microscope and so the mystery will have to wait until I get home.

I think the trip is beginning to catch up with us. Yesterday, many of us had upset stomaches and skipped a meal or two. Matt’s back has been bothering him, and today he was in a lot of pain. Fortunately, when I am traveling in these remote areas, I try to bring a small pharmacy with me, and I was able to give Matt a strong pain killer that has him mobile again. I find that my patience is beginning to wear thin, but so far I have not really snapped at anyone. That said, I am finding it harder and harder not to do so. It reinforces the need to carefully screen all prospective participants prior to the trip. We are together 24/7 in tight quarters, so it is critical that everyone be considerate of others. Of course it is hard to know this in advance. Overall, I have had a great time and any annoyances have really been minor, even it they didn’t seem so at the time.

I have now been in Chile for a bit over four weeks and am looking forward to going home. We have another two and a half days of collecting before we return to port in Punta Arenas. We then have a week to get everything dry and shipped out. It will be a busy time and the days should pass quickly. All too soon I’ll be home and missing the spectacular sub-Antarctic vistas. I need to keep this in mind and enjoy it while I can.