Join palm expert Andrew Henderson on a virtual journey through the highlights of his career as a field biologist and botanical science researcher at NYBG. Beginning in 1982 as a graduate student, and throughout many years as a curator in the NYBG Institute of Systematic Botany, Andrew’s global research program has led numerous expeditions across the Amazon rain forest and Southeastern Asia. Learn about the process through which Andrew investigates the systematics and ecology of this biodiverse and economically important plant family, and the critical significance of this research for future conservation and sustainable use of palm trees worldwide.

Dr. Andrew Henderson completed his Ph.D. in Botany through NYBG’s joint program with the CUNY Graduate Center in 1987.

After finishing his thesis, Andrew was hired as a Research Associate, and later as Curator in the Institute of Systematic Botany at NYBG. Andrew’s research takes place in two different hemispheres and employs two different methodologies. In New York, Andrew carries out detailed, multivariate statistical analysis of morphological and geographical data taken from herbarium specimens of neotropical Palmae, principally from Central America. In the Old World, Andrew carries out field-oriented research in connection with the preparation of various field guides to palms. Andrew’s recent work in Asia has focused on two major projects—a revision of the rattan genus Calamus (with over 400 species) and a project on the palms of Vietnam. Andrew Henderson formally retired in September 2020, but continues his palm research in the role of Curator Emeritus at NYBG. 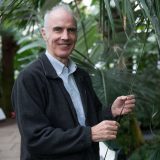