Historian Victoria Johnson will discuss her acclaimed new book, American Eden, which profiles David Hosack, the founder of America’s first public garden on the site of Rockefeller Center today. The spectacular plant collection he assembled drew praise from Thomas Jefferson, Alexander von Humboldt, and others. After her presentation, Johnson will be joined by Marta McDowell for an engaging conversation about Hosack and his work. 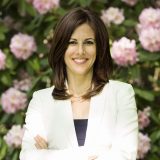 She earned her Ph.D. in sociology from Columbia University and her undergraduate degree in philosophy from Yale University. From 2015–2016, she was the Birkelund Fellow at the Cullman Center for Scholars and Writers at the New York Public Library, and in the summer of 2016 she was Mellon Visiting Scholar at The New York Botanical Garden’s Humanities Institute, where she conducted research on New York City, its natural environment, and David Hosack, resulting in her latest book: American Eden (Liveright Publishing, a division of W. W. Norton & Company, June 2018). 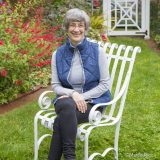 Marta McDowell is the author of The World of Laura Ingalls Wilder: The Frontier Landscapes that Inspired the Little House Books, and Horticulture and Landscape Design instructor at NYBG.

She teaches landscape history and horticulture at the New York Botanical Garden and consults for private clients and public gardens Her latest book is The World of Laura Ingalls Wilder: The Frontier Landscapes that Inspired the Little House Books. Timber Press also published All the Presidents’ Gardens, a New York Times bestseller, and Beatrix Potter’s Gardening Life, now in its sixth printing Marta is revising her first book, Emily Dickinson’s Gardens, due out in a full color edition by Timber Press in 2019.