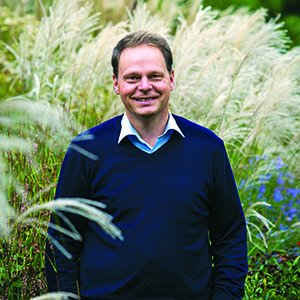 An Evening with Cassian Schmidt:
Innovation and the Future of Planting Design at Hermannshof

Groundbreaking Director Cassian Schmidt shares his insights into the history and vision of Hermannshof—the acclaimed botanical garden nestled in the rolling hills of the Rhine Valley.

First established more than 200 years ago as a private estate, and in 1888 acquired by the powerful Freudenberg family, Hermannshof has evolved through a succession of renovations, and was opened to the public in 1983 as a display and trial garden and center for plant research and education.

Set around a grand 19th-century villa overlooking a great lawn skirted by a pond, the many borders of Hermannshof flow through a series of spectacular themed plantings—each framing a particular habitat.

With over 2,500 species and cultivars of herbaceous perennials and grasses, and 400 species of shrubs and trees—some from the 18th century—Hermannshof has set the benchmark for naturalistic planting design that reflects ecological prowess and innovative artistry.

Complimentary for Garden Patrons
Support has been provided by Carnegie Corporation of New York.
This event is generously hosted by Sotheby’s.