This event is currently at capacity. Please feel welcome to register for our waiting list. If space allows you will receive a confirmation email with a link to join the talk at the time our event begins. All registrants will also receive a link to the post-event recording.

Central Park birder Christian Cooper. George Floyd. Removal of Confederate Statues. Renaming of institutions. Reparations. Systemic Racism. What’s environment got to do with it? How do we meet this moment? Drawing from her book, Black Faces, White Spaces, her relationships “in the field” and her lived experience, Dr. Finney explores the complexities and contradictions of our past, the realities of our present and the possibilities of our future as it relates to green space, race, and the power to shape the places we live in our own image. By engaging in “green” conversations with Black people from around the country, she considers the power of resistance and resilience in the emergence of creative responses to environmental and social challenges in our cities and beyond.

This virtual event will be closed captioned and include a secondary webpage with live captions in Spanish.

Carolyn Finney is a storyteller, author, and a cultural geographer. She is deeply interested in issues related to identity, difference, creativity, and resilience. Carolyn completed a B.A., an M.A. in gender and environmental issues in Kenya and Nepal, and a Ph.D., during the completion of which she was a Fulbright and a Canon National Science Scholar Fellow.

Along with public speaking, writing, media engagements, consulting (she works with a variety of environmental, educational and arts-based non-profits and government agencies), and teaching, she served for eight years on the U.S. National Parks Advisory Board, which assists the National Park Service in building relationships of reciprocity with diverse communities. Her first book, Black Faces, White Spaces: Reimagining the Relationship of African Americans to the Great Outdoors, was released in 2014. She is currently doing a two-year residency in the Franklin Environmental Center at Middlebury College as the Environmental Studies Professor of Practice. 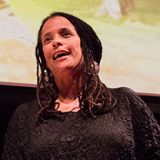