The Humanities Institute’s Andrew W. Mellon Fellows give a Research Report each year showing how they use the historical collections of the LuEsther T. Mertz Library and William and Lynda Steere Herbarium to further their interdisciplinary studies. Their presentations stimulate critical thinking at the intersection of science and the humanities and invite meaningful public discourse about society’s relationship with the natural environment.

Dr. Emily Sessions, Andrew W. Mellon Fellow at NYBG during the academic year 2020-21, received her Ph.D. in the History of Art from Yale University. Her dissertation, “Fertile Terrain: Botany, Art, and Power in Cuba’s Nineteenth Century,” places in conversation for the first time the natural history museums, botanical gardens, and thousands of paintings, drawings, and prints produced in and about Cuba from 1790 to 1860.

She also works on connections between the Anglophone, Francophone, and Hispanophone Caribbean; the visual cultures of botany, cartography, and scientific illustration; and issues of power and identity embedded in representations of the landscape and in the worked land itself. During her time at The New York Botanical Garden’s LuEsther T. Mertz Library and Archives, Emily has been examining the collection of natural history volumes from Cuba’s 19th and early 20th century in terms of shifting discourses about empire and race on the island. She is also tracing the history of the Garden’s first expeditions to Cuba at the turn of the century, a moment of rapid geopolitical change. 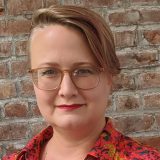