NYBG partners with Make Music New York to celebrate their annual summer solstice festival. See a special performance by the BrasCuba Group featuring the rhythms of Brazil and Cuba by Nanny Assis and Bobby Sanabria, two legendary Latin American musicians who are joining forces to lead an all-star, 10-piece ensemble. Additional performances will include young musicians from the Bronx High School of Science Jazz Club playing hits from the Great American Songbook.

In the case of inclement weather, the 5 p.m. performance will take place in Ross Hall and seating will be available on a first come, first serve basis. All performances are standing room only. 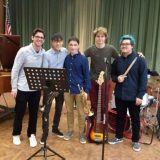 The Bronx Science Jazz Club is a high school jazz group that loves playing the jazz standards in the Great American Songbook, as well as some of the newer, more contemporary styles. 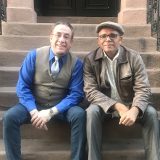 About Nanny Assis
Percussionist/singer/composer and Bahia native Nanny Assis is a master of Bossa Nova, Brazilian Jazz, Forró and a myriad of Afro-Brazilian sounds. Based in New York, where he is a regular presence at venues like the Blue Note, S.O.B.’s and Joe’s Pub, Nanny has delighted audiences around the world with his talent and charismatic stage presence.

About Bobby Sanabria
Bobby Sanabria is a 7-time Grammy-nominee as a leader. He is a noted drummer, percussionist, composer, arranger, conductor, producer, educator, documentary film maker, and bandleader of Puerto Rican descent born and raised in NY’s South Bronx. He was the drummer for the acknowledged creator of Afro-Cuban jazz, Mario Bauzá touring and recording three CD’s with him, two of which were Grammy nominated, as well as an incredible variety of artists. From Dizzy Gillespie, Tito Puente, Mongo Santamaria (with whom he started his career) Paquito D’Rivera, and many more.