The Atlantic Coastal Forest of Brazil is one of the world’s biodiversity hotspots, with a high percentage of species that are found only in this geographic area as well as devastating rates of deforestation. Critically endangered, with less than five percent of the original forest remaining, it includes some of the most diverse forests on Earth. For 37 years, NYBG scientist and current Curator Emeritus Dr. William Wayt Thomas has led research to discover and conserve the plants of this highly threatened region. An expert on the Sedge family (Cyperaceae), Dr. Thomas has also led investigations into the complex evolutionary history of beak-sedges (Rhynchospora) worldwide. His most recent studies of the genus have included phylogenetic analyses and a revision of section Pleurostachys, a group that is most diverse in Brazil’s Atlantic Coastal Forest. Join Dr. Thomas for a fascinating perspective on his long-term taxonomic and floristic research in Brazil, and learn how his collaborations with Brazilian scientists and community members have advanced understanding and preservation of its forests’ unique diversity.

His field experience covers all tropical American biomes with recent emphasis on eastern Brazil and Cuba. His research interests include systematics of neotropical plants (especially the families Cyperaceae, Simaroubaceae, and Picramniaceae), and the vegetation, biogeography, and conservation of the Atlantic Coastal Forest in northeastern Brazil. Dr. Thomas has worked at The New York Botanical Garden since 1983, serving as Elizabeth G. Britton Curator of Botany in the Garden’s Institute of Systematic Botany beginning in 2000. He now continues his taxonomic and floristic research at NYBG as Curator Emeritus. 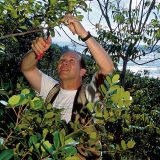