Three up-and-coming pumpkin carvers—selected by Master Carver Adam Bierton of Halloween Wars fame—face off in a battle to be named for NYBG’s Carver of the Season. Get involved and cast your vote to select the winner in this interactive contest hosed by Adam.

Learn more about the variety of accomplished artists participating in the face-off, from professional sculptors to muralists and printmakers.

Adam Bierton is a professional sculptor and pumpkin carver based in New York. In 2015, Bierton was asked to participate in the Food Network series “Halloween Wars” – and he won. The Food network contacted Bierton again in 2017 to return to defend his title on a new mini-series called “Halloween Wars: Hayride of Horror,” where he carved some of the largest pumpkins from all over the country.

Amand Barton is New York based experiential design artist with a background in sculpture and printmaking. He has designed projects for some of the top companies of the world, and his work is heavily displayed throughout the NY area.

Justin Suarez is a mural artist with over 18 years of experience. He has painted murals across the United States and his work has been featured around the world. He recently started his career in pumpkin carving, and has produced some amazing work with his artistic background.

Robert McDonough is a freelance artist with versatile talents including airbrushing, portrait painting, pin striping, tattooing and, of course, pumpkin carving. He is constantly seeking new mediums to expand his craft and is excited to compete in this year’s Pumpkin competition. 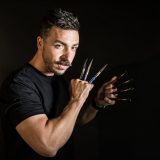