Location In the Enid A. Haupt Conservatory

A visit to select galleries of the Enid A. Haupt Conservatory reveals intimate displays of orchids in brilliant white and striking colors set against the foliage of aroids, ferns, and bromeliads—planted as they might be found in nature and blending gracefully with their surroundings. Discover unusual orchids from NYBG’s renowned collections, as well as artful floral creations by Garden horticulturists that combine expressive orchids with rocks, tree trunks, vines, and other found materials.

Orchids come in all sizes and colors, making them a favorite at home and at NYBG. Explore orchid care tips and videos and learn more about the diverse world of orchids from home. 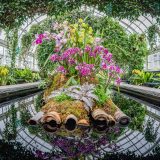 In spite of strict international regulations, many wild orchids today are under severe threat of extinction from over collection, poaching, and destruction of their native habitats. The Convention on International Trade in Endangered Species (CITES) is an agreement between governments to ensure that international trade of wild plant and animal specimens (and products made from them) does not threaten their survival. 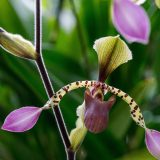 Choose from a selection of top-quality orchids, from exotic, hard-to-find specimens for connoisseurs to elegant yet easy-to-grow varieties for beginners.

Expert staff will be on hand to provide tips on orchid care and help you select the best orchid to purchase for your home. Purchases in the Shop and online support the Garden’s pursuit of excellence in horticulture, plant research and conservation, and education. 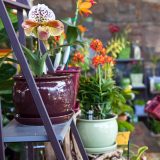 Whether you need a refresher on potted orchid care or want to learn how to successfully grow native species in your own backyard, we have a class for you! 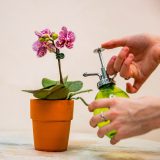